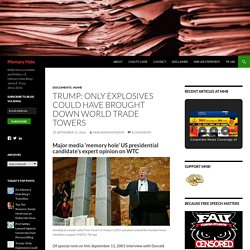 This prescient observation is being intentionally overlooked by major media in the wake of 9/11’s fifteenth anniversary. Many of these ‘news’ outlets chose instead to single out a brief and arguably unrelated comment by Trump early on in the exchange–‘bragged’ that he ‘owned the tallest building’ in Manhattan next to the WTC– while failing to recognize and highlight his much more important expert opinion concerning the World Trade Center’s fate alongside those of its inhabitants.

“At one point during the nearly 10-minute interview,” Washington Post political reporter Jenna Johnson writes, “Trump mentioned that his building in the Financial District was now the tallest. Related. The Importance of the Official 9/11 Myth. By Kevin Ryan Source: Washington’s Blog People sometimes wonder why is it important to investigate the alleged hijackers and others officially accused of committing the 9/11 crimes. 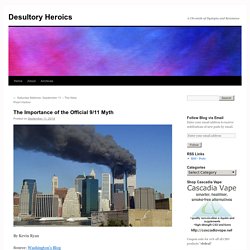 9/11: An Online Compendium of Research and Analysis – Memory Hole. Robert David SteelePhi Beta Iota It is not possible to be a fully effective professional if you are not able to question official narratives and blatant lies told by official personalities. 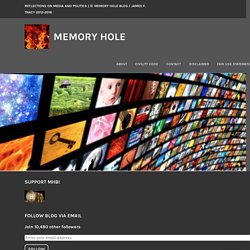 It is now known that Dick Cheney “took over” the 9/11 plot hatched by the Zionist government of Israel (not to be confused with the sane loyal Jews everywhere including Israel). Click to Enlarge It is now known that in the aftermath of 9/11 the US Constitution was trashed and 935 now-documented lies were told to justify elective wars and a swath of destruction running from Afghanistan through the Middle East and North Africa down to Somalia, Niger, and Nigeria. The 9/11 "28 Pages" Report, That No One Is Talking About, Indirectly Implicates Saudi Arabia - The Duran. Congress released the classified report this past Friday amid a whirlwind news cycle that included the Nice terrorist attack, failed Turkey coup, and Tump VP rumors…so media coverage of what is a huge story has been largely ignored. 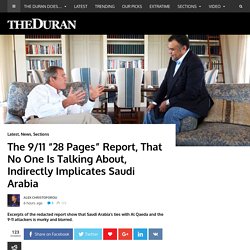 A Saudi Imam, 2 Hijackers and Lingering 9/11 Mystery. Photo WASHINGTON — Inside an opulent palace in Riyadh late one evening in February 2004, two American investigators interrogated a man they believed might hold answers to one of the lingering mysteries of the Sept. 11, 2001, attacks: What role, if any, did officials in ’s government play in the plot? 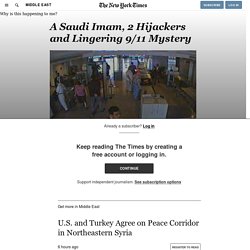 The FBI Has 80,000 Documents on Saudi Ties to 9/11 It Tried to Suppress. (ANTIMEDIA) The classified 28-pages of the 9/11 report have made global headlines lately as a handful of lawmakers battle to release them to the public. 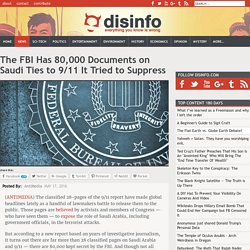 Those pages are believed by activists and members of Congress — who have seen them — to expose the role of Saudi Arabia, including government officials, in the terrorist attacks. But according to a new report based on years of investigative journalism, it turns out there are far more than 28 classified pages on Saudi Arabia and 9/11 — there are 80,000 kept secret by the FBI. And though not all 80,000 are expected to concern the Saudi family — and the FBI insists their investigation of the documents came up empty-handed — journalists, at least one lawmaker, and heavily-redacted documents suggest otherwise.

As the Daily Beast reported, the discovery of the 80,000 pages came when Irish investigative journalists Anthony Summers and Robbyn Swan were contacted by an unnamed counterterrorism official in 2011. U.S. Saudi Arabia 9/11 - More Saudi Officials Implicated in September 11 Report Than First Thought. The pointless alleged cover-up of the role of Saudi nationals in the attacks of September 11, 2001 is starting to come just a little bit unraveled. 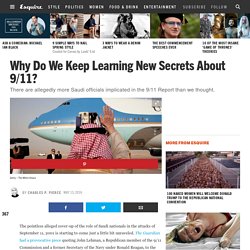 The Guardian had a provocative piece quoting John Lehman, a Republican member of the 9/11 Commission and a former Secretary of the Navy under Ronald Reagan, to the effect that the investigation essentially buried the question of Saudi involvement. "There was an awful lot of participation by Saudi individuals in supporting the hijackers, and some of those people worked in the Saudi government," Lehman said in an interview, suggesting that the commission may have made a mistake by not stating that explicitly in its final report. 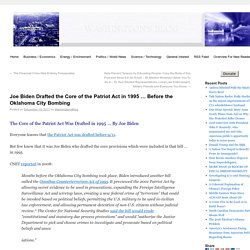 But few know that it was Joe Biden who drafted the core provisions which were included in that bill … in 1995. The Joy of Conspiracy Denial. - Advertisement - Recently I read another stinging rebuke of the 9-11 conspiracy theorists for their frightful mishandling of evidence, their will to believe only what gives them psychological comfort, and their general state of delusion. 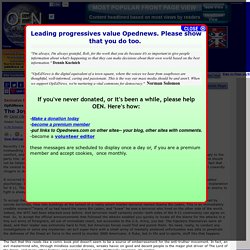 Teaching 9/11 to Conspiracy Theorists. This article was originally written in November 2015. 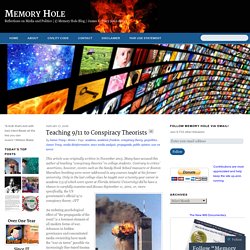 Many have accused this author of teaching “conspiracy theories” to college students. Contrary to critics’ assertions, however, events such as the Sandy Hook School massacre or Boston Marathon bombing were never addressed in any courses taught at his former university. Only in the last college class he taught over a twenty year career in academe (13 of which were spent at Florida Atlantic University) did he have a chance to carefully examine and discuss September 11, A Public Challenge to Professor Noam Chomsky. A Public Challenge to Professor Noam Chomsky: Debating the September 11th Attack Evidence Joe Giambrone12.1.2015 Opening Statement Professor Noam Chomsky of MIT has made odd, and frankly specious, claims regarding skepticism of the government’s official story of the September 11th, 2001 attacks ( His statements were misleading and have, in fact, misled many people who defer to him as an expert on these matters.

There are clearly two sides to this discussion, if we are to eliminate obfuscation and side-issues. A Good American review: fascinating revelations about the NSA's role in 9/11. Despite the controversy over Edward Snowden’s revelations of US surveillance of its citizens, it’s easy to imagine the country’s security services privately not being that embarrassed: there might be professional pride in overzealous snooping.

But such bodies’ role in 9/11 is another matter entirely. What if it could be shown that the NSA could have – should have – prevented the attacks on the World Trade Center; that its failure to do so wasn’t due to bad luck, but a lethal cocktail of incompetence, arrogance and greed; and that they then sought to cover up their mistakes? This possibility is the driver of a fascinating, conspiracy theorising documentary: Friedrich Moser’s A Good American, which premieres on Tuesday at the CPH:DOX film festival in Copenhagen. It may not have the contemporaneous frisson of Laura Poitras’s Oscar-winning Citizenfour, but it certainly packs a punch.

It starts with a devastating hook. Binney is also featured in Citizenfour. Let us now blame George Bush: Trump and Jeb force a long overdue debate about 9/11. If the Republican presidential primary race were a Thanksgiving dinner, Donald Trump would be the crazy old uncle who drinks too much and says outrageous things that embarrass everyone at the table.

Sometimes those things are embarrassing because they’re brazenly bigoted, or absurdly boastful, or otherwise generally unconnected to reality. But occasionally he says something embarrassing precisely because it’s true. Trump’s repeated tweaking of Jeb Bush for Bush’s preposterous claim that his brother “kept us safe” during his presidency falls into the latter category. Trump’s mockery is of course more than justified. On its face, Jeb’s claim would be analogous to Exxon boasting about its record of keeping the Alaskan coastline mostly free from oil spills, or the governor of Texas taking pride in executing mostly guilty defendants. But in all seriousness, the genuinely freakish doublethink Republicans indulge in on this subject requires further explanation. 9/11: What Bush knew.

Last year Jonathan Kay, a Canadian journalist, published “Among the Truthers,” an interesting chronicle of, among other things, post-9/11 conspiracy theories. Many of these theories are outlandish on their face, such as claims that the twin towers were brought down by controlled demolition, that airplanes never struck them, that Flight 93 landed in Cleveland rather than crashing in a Pennsylvania field, and so forth. Ho, Ho, Ho! 9/11 Was An Inside Job! Seasons greeting from your old friend Santa! My, my, Christmas is just two short weeks away, and everyone here at the North Pole can't wait to deliver presents to all you nice boys and girls this year. Yes, Jolly ol' St. Nicholas hopes you're all being as good as can be! But today, Santa would like to tell you all about something very naughty, something very, very naughty indeed.

Dear children, have you not heard? WTC Steel Removal. Conclusive Evidence the 9/11 Planes were NOT REAL. Dr Judy Wood : Evidence of breakthrough energy technology on 9/11. Fema403_ch6. 9/11 Trillions: Follow The Money. Child At 9/11 Memorial Service Sternly Reminded We Are Sad Today. MADISON, CT—After several warnings to stop his fidgeting and keep quiet during the town’s 9/11 memorial service, 6-year-old Caleb Goetz was sternly reminded by his mother that today is a sad day, sources confirmed this morning.

“Caleb, we’re sad today, so no more goofing around. Got it?” Said the boy’s mother, Hannah Goetz, in a sharp whisper, bending down to look the child in his eyes and tell him to stop running his Matchbox car up and down her pant leg and making engine noises with his mouth while the people at the podium were speaking into the microphone. 9/11 The Toronto Hearings - 2011/12 (Full Length) International Living Learning Centre, Ryerson University, 240 Jarvis Street, Toronto, September 8, 9, 10 & 11, 2011. Missed Calls. On March 20, 2000, as part of a trip to South Asia, U.S. President Bill Clinton was scheduled to land his helicopter in the desperately poor village of Joypura, Bangladesh, and speak to locals under a 150-year-old banyan tree.

At the last minute, though, the visit was canceled; U.S. intelligence agencies had discovered an assassination plot. In a lengthy email, London-based members of the International Islamic Front for Jihad Against Jews and Crusaders, a terrorist group established by Osama bin Laden, urged al Qaeda supporters to “Send Clinton Back in a Coffin” by firing a shoulder-launched missile at the president’s chopper.

The NSA’s 9/11 Cover-Up: General Hayden Told a Lie, and It’s a Whopper. “All tricksters, other than magicians, depend to a great extent upon the fact that they are not known to be, or even suspected of being, tricksters. American Institute of Architects to reconsider WTC 7 Collapse (Includes interview) Claims Against Saudis Cast New Light on Secret Pages of 9/11 Report. WASHINGTON — A still-classified section of the investigation by congressional intelligence committees into the Sept. 11, 2001, attacks has taken on an almost mythic quality over the past 13 years — 28 pages that examine crucial support given the hijackers and that by all accounts implicate prominent Saudis in financing terrorism.

New allegations of Saudi involvement in 9/11. 9/11 terrorists caught testing airport security months before attacks. 9/11: the Saudi Connection. CNN Gets Conspiratorial About 9/11. NSA Insiders Reveal What Went Wrong. NSA Whistleblower on 911 Foreknowledge and The Information War. October 2003: Craig Unger Saudia Arabia. Inside the Saudi 9/11 coverup. Conversations with Great Minds with Anthony Summers - The Eleventh Day. Pt1. What will make or break the United States of America is the truth about 9/11: Investigate the theories behind the conspiracies.

Bush and His Aides Made 935 False Statements about Iraq In the 2 Years After 9/11. Saudi Royal Ties to 9/11 Hijackers Via Florida Saudi Family? Context of '8:18 a.m. September 11, 2001: Flight 11 Attendant Betty Ong Calls Airline Reservations Office to Report Hijacking' Ho, Ho, Ho! 9/11 Was An Inside Job! The Bush White House Was Deaf to 9/11 Warnings. All Day of 9/11 Events. Architects & Engineers For 9/11 Truth. The Psychology of Mass Denial: 9/11 Truth and Cognitive Dissonance. The Central Intelligence Agency 9/11 File: Hundreds of Secret Agency Documents on Osama Bin Laden Declassified.