Carfires. Locations of burnt cars several blocks away from the towers on FDR drive How did cars so far away from WTC catch fire? 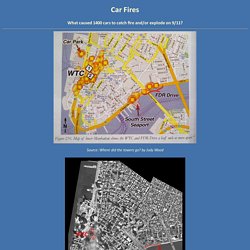 Flipped and burned vehicles This is thought to be the exit ramp at the Brooklyn Bridge and FDR drive. Many burnt cars, yet 2 under the bridge are dusty but unharmed, why? Corner of Broadway and Barclay, Building 7 is on the right, USPS is on the left. In the background you can see WTC5 on fire on the left and WTC 6 on the right. Here we have stepped back one block from the previous photo and are now at 30 West Barclay. Here we are looking at the front of the bus from the previous photo, 30 W. Here we have stepped back a little more, 30 W. Burnt postal truck at 100 Church St. 9/11 The EVIDENCE Theo Chalmers Interviews Dr Judy Wood. 9/11 Hypothesis: AE911Truth vs. Judy Wood. Dr. Judy Wood ~ Evidence of Breakthrough Energy on 9/11. The Billiard Ball Example. Appendix A: For those concerned about momentum. 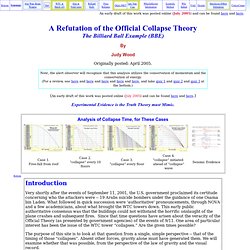 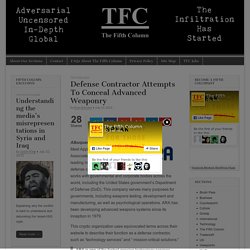 (ARA), a leading international defense contractor that works with governmental and corporate bodies across the world, including the United States government’s Department of Defense (DoD). This company serves many purposes for governments, including weapons testing, development and manufacturing, as well as psychological operations. ARA has been developing advanced weapons systems since its inception in 1979.

This cryptic organization uses equivocated terms across their website to describe their function as a defense contractor, such as “technology services” and “ mission-critical solutions:” ARA is one of the fastest growing technology services companies in the country. On March 1, 2007, ARA posted the information below concerning a certain weapon, which has since been removed from its website, the “Prototype Disruptor.” Source: In addition, ARA was a primary Respondent in Dr. Comments. 9/11 Foreknowledge Caught on Computers that Measure Global Mind.

Rady AnandaActivist Post Fascinating research into a “global mind” picked up startling data in the days and hours before the 9/11 attacks, indicating widespread foreknowledge. 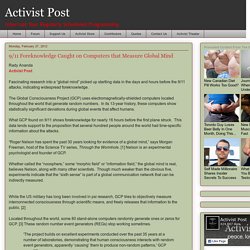 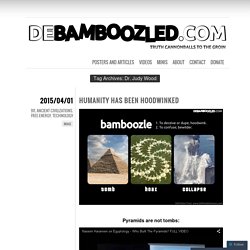 WHAT IS SOLID? Resonance at Tacoma Narrows and Material Specific Reactions. "War is a Thousand Infernos" by Nikola Tesla. Boyd Bushman On The Hutchison Effect and Antigravity. What is dielectric material? - Definition from WhatIs.com. A dielectric material is a substance that is a poor conductor of electricity, but an efficient supporter of electrostatic field s. 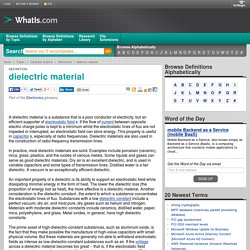 If the flow of current between opposite electric charge poles is kept to a minimum while the electrostatic lines of flux are not impeded or interrupted, an electrostatic field can store energy. This property is useful in capacitor s, especially at radio frequencies. Dielectric materials are also used in the construction of radio-frequency transmission lines.

In practice, most dielectric materials are solid. Examples include porcelain (ceramic), mica, glass, plastics, and the oxides of various metals. An important property of a dielectric is its ability to support an electrostatic field while dissipating minimal energy in the form of heat. Dr Judy Wood talks about the TV weather reports in NYC on 9/11. Dr Judy Wood discusses magnetometer readings taken on 9/11. Magnetometer on 9/11 Shows Exotic Weapons Evidence. On the days prior to September 11, 2001, the earth's magnetic field was quite stable, as Hurricane Erin tracked directly up the -15 line of that field toward New York City as a category 3 storm. 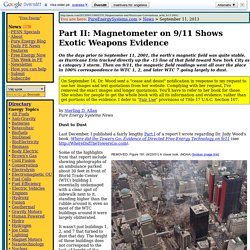 Then on 9/11, the magnetic field readings went all over the place in 100% correspondence to WTC 1, 2, and later WTC 7 going largely to dust. by Sterling D. Allan Pure Energy Systems News Dust to Dust Last December, I published a fairly lengthy Part I of a report I wrote regarding Dr. Some of the highlights from that report include showing photographs of an ambulance parked about 30 feet in front of World Trade Center (WTC) building 1 essentially undamaged with a clear spot of sidewalk next to it, standing higher than the rubble around it, even as most of the WTC buildings around it were largely obliterated. It wasn't just buildings 1, 2, and 7 that turned to dust that day. The September 11 Hurricane That Missed New York City - weather.com. Visible satellite image of Hurricane Erin off the Northeast seaboard on Sept. 11, 2001 at 10:39 a.m. 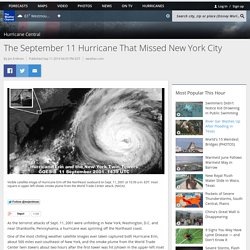 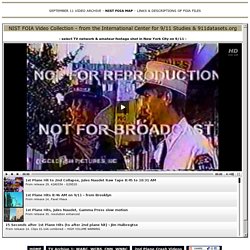 Please send additional photo and video links to matt(at)911conspiracy•tv. UPDATE 2015: NIST WTC Investigation Video List now embedded below, obtained by FOIA in "NIST FOIA 11-218 Aug_24_2011. " Links will be added as time permits. UPDATE 2013: The following materials are largely available for download online at wtcdata.nist.gov. Some links to their materials will not work unless you click Continue and agree to their terms. Understanding 9/11: A Television News Archive. WTC037.jpg Photo by 911conspiracytv. NYC Transit Auth. 9/11 Documentary. WTC1 Core Inside Ground Zero . NIST FOIA Release 10.

Hutchison Effect 2/2. Hutchinson Effect Explained. 9/11 - World Trade Center - Steel Column turns to Dust. Dr. Judy Wood - "The Spire" Where did the Towers Go? WTC - Flight 175 "Crash" - What Caused the Puff and Flare? Nonlinear warfare: A new system of political control [Adam Curtis] 2015. Untitled. John Lear - 9/11 Holographic Projector. 9/11 Pictures Archive. Chapter 7 - Peripheral Buildings - The WTC Report. 7.1 Introduction In addition to the WTC buildings and Bankers Trust building, a number of other buildings suffered damage from the projectiles and debris resulting from the deliberate aircraft impacts into WTC 1 and WTC 2 on September 11, 2001, and the resulting collapse of WTC 1, WTC 2, and WTC 7. 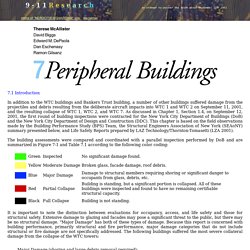 As discussed in Chapter 1, Section 1.4, on September 12, 2001, the first round of building inspections were contracted for the New York City Department of Buildings (DoB) and the New York City Department of Design and Construction (DDC). This chapter is based on the field observations made by the Building Performance Study (BPS) Team, the Structural Engineers Association of New York (SEAoNY) summary presented below, and Life Safety Reports prepared by LAZ Technology/Thornton-Tomasetti (LZA 2001). The building assessments were compared and coordinated with a parallel inspection performed by DoB and are summarized in Figure 7-1 and Table 7.1 according to the following color coding: Full Collapse.

Chapter 7 - Peripheral Buildings - The WTC Report. The Manhattan Power Spot: A Shamanic Understanding - The Power Path. By José Luis Stevens A trip to visit our son Carlos brought my wife Lena and I to New York City in late November, 2011. He recently moved to Manhattan to work as the Creative Director of a computer design and animation company and we wanted to see where he worked and visit his apartment where we stayed for a few days. His apartment building on the West Side has a roof with a fabulous view of the entire city and we spent some time up there in the cold November wind getting to the know the city from that vantage point. Wall Street and the World Trade Center where Ground Zero is now being rebuilt and reshaped is a few subway stops away.

By Philip Delves Broughton Updated: 00:01 GMT, 12 February 2010 We have seen the Twin Towers collapse hundreds of times on TV. The steel and glass skyscrapers exploding like a bag of flour, the dust and smoke pluming out across Manhattan. But never like this, from above. Nine years after the defining moment of the 21st century, a stunning set of photographs taken by New York Police helicopters forces us to look afresh at a catastrophe we assumed we knew so well.

AE911TRUTH - FAILURE BY DESIGN: THOMAS & SARAH CORRIHER - FIELD INTERFERENCE 013. Check The Evidence - Paul Hellyer Begins to Break the Taboo Of Disclosure. 13 May 2015 Background Since at least 2009, I have documented that there is a taboo in what might be called “the Disclosure movement.” That taboo is any discussion that either “free energy technology” or “black technology” played a role in the destruction of the WTC Complex on 911. The fact that someone’s “directed free-energy technology” was used to destroy the WTC Complex on 911 can be concluded by a careful study of Dr Judy Wood’s research, which was published in book form in very late 2010 and became available in quantity in 2011. I have written quite a lot about how those whom I expected to be the first to openly and sensibly discuss these conclusions have, by and large, done no such thing.

The Journal of 9/11 Research and 9/11 Issues. The Taboo of Disclosure by Andrew Johnson. 9/11 amateur video by Dr. Mark Heath. Jim Marrs in Toronto (22-06-2014) March 31, 1958. Wilbert B. Smith Ottawa Ontario Canada I have been actively engaged in the investigation of the group of phenomena known as flying saucers for over several years. During this period I have read most of the available literature on the subject, interviewed a great many people who have seen unusual things in the sky, examined many pictures and physical objects, made observations with scientific instruments, and carried on a series of communications with intelligences with intelligences claiming to be extraterrestrial.