An oil well off Australia leaked for weeks last year. We just found out about it. The National Offshore Petroleum Safety and Environmental Management Authority mentioned the leak in an annual report on offshore exploration but revealed no details about who operated the well. 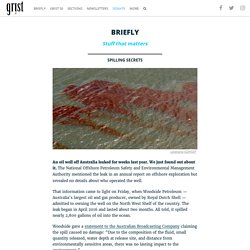 That information came to light on Friday, when Woodside Petroleum — Australia’s largest oil and gas producer, owned by Royal Dutch Shell — admitted to owning the well on the North West Shelf of the country. The leak began in April 2016 and lasted about two months. Chevron Pipeline Spills 4,800 Gallons of Oil on Public Land, Kills Wildlife. Cleanup efforts are underway after a failed Chevron Corporation pipeline released about 4,800 gallons of oil into an intermittent stream on public land in northwestern Colorado and killed some wildlife. 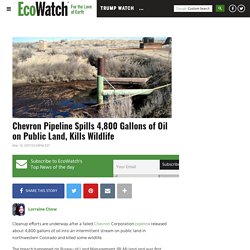 The breach happened on Bureau of Land Management (BLM) land and was first detected on March 5 by a Chevron consultant. The pipeline was shut down after discovery of the leak and the oil is now trapped in a berm and siphon dam in a dry ravine, according to the Associated Press. As it happens, the leak occurred around the same time that the conservation group Center for Western Priorities found that Chevron was behind 31 reported spills in Colorado last year, ranking the energy corporation as the fourth highest oil and gas spiller in the state.

Oregon explosion reminds us that oil trains are “weapons of mass destruction” An oil train that went off the tracks and burst into flames in the Columbia River Gorge in Oregon last week hasn’t been cleaned up yet, but the railroad is already back to business as usual. 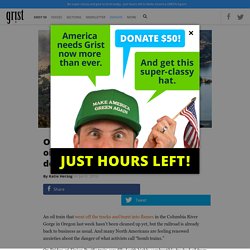 And many North Americans are feeling renewed anxieties about the danger of what activists call “bomb trains.” On Friday, 16 Union Pacific train cars filled with highly combustible fracked oil from the Bakken shale formation in North Dakota derailed outside Mosier, Ore. Multiple cars caught fire, and about 100 people were evacuated from nearby homes. Elizabeth Sanchey, one of the first responders, told Oregon Public Broadcasting that the scene “looked like the apocalypse.” This weekend, a sheen of oil was spotted on the Columbia River nearby. Mosier city officials quickly passed an emergency motion calling on Union Pacific to remove all oil from the damaged cars before the line was reopened, but Union Pacific just pushed the disabled cars to the side of the track and restarted operations. 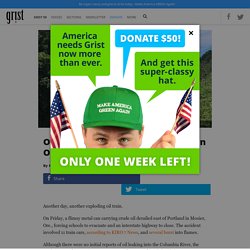 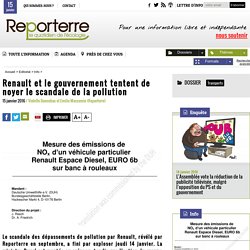 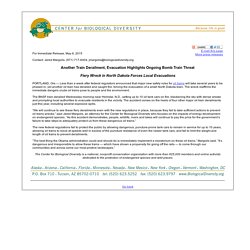 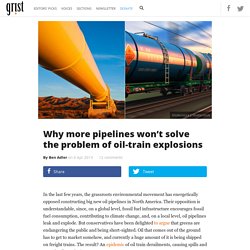 Their opposition is understandable, since, on a global level, fossil fuel infrastructure encourages fossil fuel consumption, contributing to climate change, and, on a local level, oil pipelines leak and explode. But conservatives have been delighted to argue that greens are endangering the public and being short-sighted. Report: Oil Trains Threaten 25 Million Americans, Iconic Rivers, Wildlife. For Immediate Release, February 19, 2015 Contact: Jared Margolis, (971) 717-6404 or JMargolis@biologicaldiversity.org Report: Oil Trains Threaten 25 Million Americans, Iconic Rivers, Wildlife Moratorium on ‘Bomb’ Trains Needed Till Safety Can Be Ensured PORTLAND, Ore.— As officials probe the two latest explosive oil train derailments in Ontario and West Virginia, the Center for Biological Diversity released a report today offering striking new details on the broad range of unchecked risks to people and the environment posed by the largely unregulated escalation in U.S. rail transport of oil. 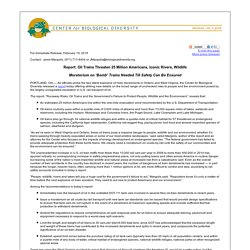 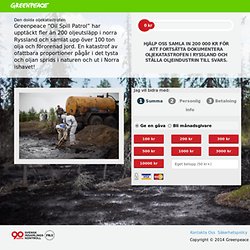 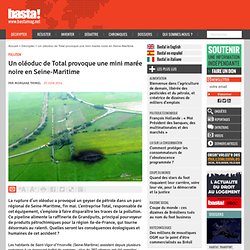 That’s according to an analysis by EnergyWire, which studied state data to conclude that the number of spills was up 18 percent from the year before: Many of the spills were small. But their combined volume totaled more than 26 million gallons … That’s the same volume as what gushed four years ago from BP PLC’s ruptured Gulf of Mexico oil well in 11 days.Some of the increase may have come from changes in spill reporting practices in a handful of states, but the number of spills and other mishaps rose even without counting those states.Some of the biggest jumps were in the booming Bakken Shale. Crews Work to Contain Oil Barge’s Leak. Photo Emergency crews in Texas worked on Sunday to contain 168,000 gallons of oil that leaked into Galveston Bay on Saturday from a barge that collided with a ship, officials said. Four skimming vessels deployed at the scene of the spill near Texas City were expected to finish removing the remaining oil from the barge on Sunday, the Coast Guard said.

They were joined Sunday by 20 response vessels, along with 90,000 feet of boom to help contain the oil. The barge had been carrying 924,000 gallons of bunker fuel oil, a particularly thick type of oil. Once the barge is emptied and decontaminated, it will be taken to a local shipyard for inspection and repairs, the Coast Guard said. On Exxon Valdez anniversary, a fresh spill threatens Texas wildlife. Alabama wetland still infested with oil, four months after train accident. The derailment and explosion of a train passing through Alabama wetlands in November helped bring attention to the dangers of hauling oil by rail. But the mess left behind after the explosion has been largely ignored. Chevron Apologizes for Fracking Site Explosion With Free Pizza. In a single move, Chevron has managed to demonstrate that they are bad at apologies, public relations, and preventing explosions. After a deadly February 11 explosion at a fracking site near Bobtown, Pennsylvania, the corporation is giving out coupons for free pizza, because that’s how complacent Chevron thinks their consumer base is.

The citizens of Bobtown certainly deserve some sort of remediation for the explosion, although not one covered in cheese and sauce. One Chevron employee is still missing and presumed dead, while the fire created by the blast burned for five days and endangered the lives of countless rescuers. Residents of Bobtown say they are terrified of residual toxins left over from the inferno and claim this isn’t the first time that the fracking site has impacted their community.

There Are 1,401 Uninspected High-Risk Oil and Gas Wells. Here's Where They Are. Oil covers the ground after a 2010 well blowout near Cheyenne, Wyoming. The state leads the nation for uninspected wells on federal land. (The inspection status of this particular well is unknown.) AP Johnson County, Wyoming, is the kind of remote, quiet Western community where life revolves around cattle—it was the site of an infamous 19th-century armed battle between cowboys and suspected cattle rustlers. The county ranks only 11th statewide for oil production, but it holds the No. 1 ranking nationwide for a more ignominious distinction: It has 249 new, high-risk oil and gas wells that the federal government has failed to inspect for compliance with safety and environmental standards. Fracking chemicals may make oil extra explosive. Freedom Industries kept West Virginia spill details secret.

If you had been among Freedom Industries’ dozens of employees, you would have known more than your neighbors about the contents of a toxic spill that left hundreds of thousands of West Virginians without safe tap water recently. After state officials discovered on Jan. 9 that chemicals had gushed out of a storage drum and into Elk River, the company told them that the drum contained something called 4-Methylcyclohexane methanol. The poison is used by the state’s coal miners. Little is known about the precise hazards that it poses, but it has sickened hundreds of people. News - CN fuel cars derail, explode west of Edmonton. Another oil-hauling train explodes, forcing evacuations in North Dakota. North Dakota’s oil-drilling boom spawned yet another fiery train wreck this week. A 106-car crude-hauling train derailed and exploded on Monday, the latest unfortunate consequence of the mad scramble to get fracked oil to refineries by rail.

Nobody was hurt during the explosion and fire, which burned for more than a day, but most residents of a nearby town in eastern North Dakota heeded evacuation calls as toxic smoke billowed over their homes. “This is too close for comfort,” Casselton Mayor Ed McConnell told the AP. Safety rules to prevent oil-train explosions delayed. Sounds like we might need to get used to oil-hauling trains exploding. New rules that would require railways to use stronger cars for transporting crude will not be ready until next year, the federal government announced this week.

There are a few reasons why we’re seeing more oil-train explosions these days. ETATS-UNIS. Immense explosion d'un convoi de pétrole. Oil and gas train runs off tracks, explodes in Canada — again. Another train loaded with fossil fuels derailed in Canada over the weekend, triggering explosions and fueling a big fire. Firefighters did not bother battling the flames at the accident near Edmonton in Alberta.

Instead, they allowed the propane that was leaking from ruptured rail cars to burn itself out. Nobody was hurt, but a nearby town was evacuated. From a weekend Globe and Mail report: Oil spillage from freight trains hit record high in 2013. Oil is spilling from trains, pipelines … and now barges. Train loaded with oil derails, explodes, pollutes Alabama wetlands. Crude on the tracks: Oil spills from trains skyrocket. News - CN fuel cars derail, explode west of Edmonton. Gp_sunrise : Faiza: “Even oil companies...