Holy Loch. Location of the Holy Loch in Scotland The Holy Loch (Scottish Gaelic "An Loch Sianta/Seunta") is a sea loch in Argyll and Bute, Scotland. 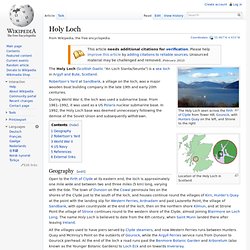 During World War II, the loch was used a submarine base. From 1961–1992, it was used as a US Polaris nuclear submarine base. In 1992, the Holy Loch base was deemed unnecessary following the demise of the Soviet Union and subsequently withdrawn. Geography[edit] Open to the Firth of Clyde at its eastern end, the loch is approximately one mile wide and between two and three miles (5 km) long, varying with the tide.

All the villages used to have piers served by Clyde steamers, and now Western Ferries runs between Hunters Quay and McInroy's Point on the outskirts of Gourock, while the Argyll Ferries service runs from Dunoon to Gourock pierhead. Robertson's Yard[edit] After the war the yard built the successful one-class Loch Longs and two 12-metre challengers for the America's Cup: Sceptre (1958) (17 tonnes) and Sovereign (1964). World War II[edit] [edit] Holy Loch. The Holy Loch is a sea loch which lies two miles north of Dunoon on the Cowal peninsula. 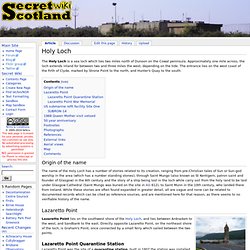 Approximately one mile across, the loch extends inland for between two and three miles the west, depending on the tide. The entrance lies on the west coast of the Firth of Clyde, marked by Strone Point to the north, and Hunter's Quay to the south. Origin of the name The name of the Holy Loch has a number of stories related to its creation, ranging from pre-Christian tales of Sun or Sun-god worship in the area (which has a number standing stones), through Saint Mungo (also known as St Kentigern, patron saint and founder of Glasgow) in the 6th century and the story of a ship being lost in the loch while carry soil from the holy land to be laid under Glasgow Cathedral (Saint Mungo was buried on the site in AD 612), to Saint Munn in the 10th century, who landed there from Ireland.

Lazaretto Point Lazaretto Point Quarantine Station Lazaretto Point War Memorial US submarine refit facility Site One Photographs. The British Government and the American Polaris Base in the Clyde : JMR. Introduction Forty years ago, on 3 March 1961, the American depot ship Proteus arrived in the Holy Loch on the Clyde, to meet one of the most active and sustained campaigns of protest in modern British history. 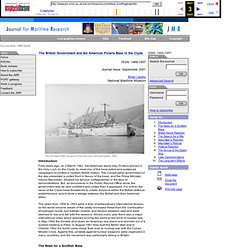 The Conservative government of the day presented a united front in favour of the base, and the Prime Minister, Harold Macmillan, showed his famous 'unflappability' in the face of demonstrations. But, as documents in the Public Record Office show, the government was far less confident and united than it appeared. ANTI - POLARIS DEMONSTRATIONS AT - HOLY LOCH. <div id="videoNoJS">Please ensure you have JavaScript turned on and have the latest version of <a href=" target="_blank">Adobe Flash</a> installed</div> Star Item. 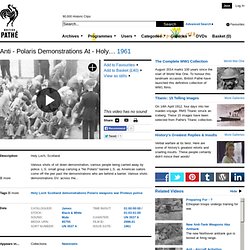 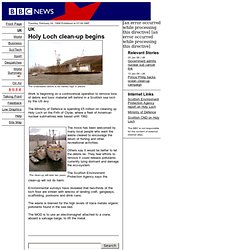 The Ministry of Defence is spending £5 million on cleaning up Holy Loch on the Firth of Clyde, where a fleet of American nuclear submarines was based until 1992. The move has been welcomed by many local people who want the waste cleared to encourage the return of fishing and other recreational activities. Others say it would be better to let the debris lie. The Scottish Environment Protection Agency says the clean-up will not do harm. 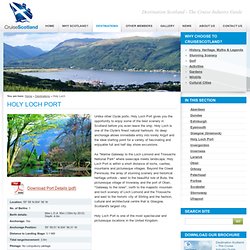