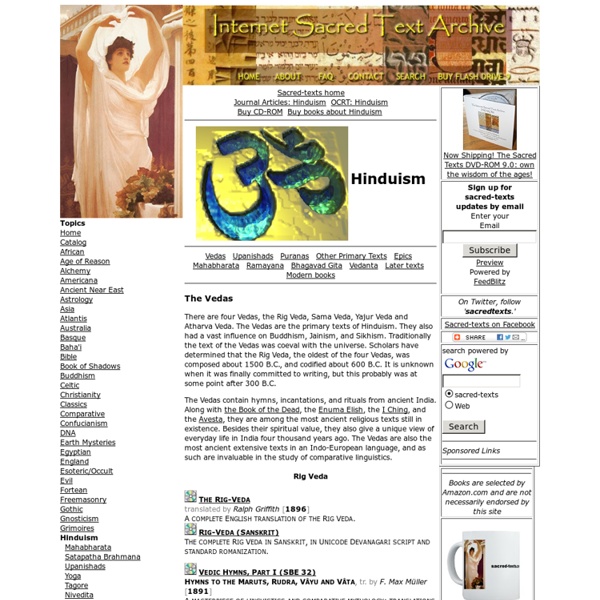 Manas: Religious texts of India, Puranas Puranas The Puranas are a class of literary texts, all written in Sanskrit verse, whose composition dates from the 4th century BCE to about 1,000 A.D. The word "Purana" means "old", and generally they are considered as coming in the chronological aftermath of the epics, though sometimes the Mahabharata, which is generally classified as a work of itihas (history), is also referred to as a purana. What is Kundalini Yoga? TNN Aug 26, 2010, 12.00am IST (What is Kundalini Yoga? ) Kundalini yoga is a form of physical and meditative yoga that comprises of various techniques using the mind, body and our senses.

Maharshi Veda Vyasa: The Life and Works of Hindu Sages By Subhamoy Das Updated May 12, 2016. Vyasa is perhaps the greatest sage in the history of Hindu religion. He edited the four Vedas, wrote the 18 Puranas, the epic Mahabharata and the Srimad Bhagavatam and even taught Dattatreya, who is regarded as the ‘Guru of Gurus.’ Four Powers of Maya EACH of the four Yugas, as described by the ancient Hindu sages, has a correspondence with one of the four powers of Maya, the darkness of Illusion that hides from man his Divine nature. Each Yuga brings to mankind in general an opportunity to control and understand one of these universal powers. The four Illusions, Abidyas, of Maya, counting from the grossest to the most subtle, are: This four-fold aspect of Maya is mentioned in the bible in the following passage (Rev. 4:6): "And in the midst of the throne and round about the throne, were four beasts full of eyes before and behind." In Kali Yuga, the knowledge and power of man is confined to the world of gross matter (Bhu Loka, first sphere,) and his state or natural caste is Sudra, a menial or dependent of Nature.

Great Systems of Yoga: Chapter Two. Patanjali's Raja Yoga Sacred Texts Hinduism Yoga Index Previous Next Buy this Book at Amazon.com Great Systems of Yoga, by Ernest Wood, [1954], at sacred-texts.com p. 12 p. 13 p. 14 p. 15 FOREMOST among the Yoga teachings of India comes that of Patanjali dating back, according to popular tradition, to at least 300 B.C. Kundalini: Awakening the Serpent Power Kundalini: Awakening the Serpent Power by Georg Feuerstein Cleansing the Doors of Perception The way we see the world depends on who we are. On the simplest level, a child walking down the street will readily spot all the toy stores, a penny-wise mother will see all the bargains displayed in shop windows, an architect will easily notice unusual buildings, and a taxi driver will be quick to spot house numbers.

Hindu Theory of World Cycles Traditional Hindu scriptures view history as cyclical in character, with vast repeating series of ages. Each age has its own particular qualities. Interestingly, this system seems to be taken literally by modern Yoga masters such as Swami Muktananda, Baba Hari Dass, Swami Vishnu Tirtha, and so on. As a Western devotee, I found myself wondering exactly what the full system of Hindu cycles is, and how it relates to the findings of modern science.