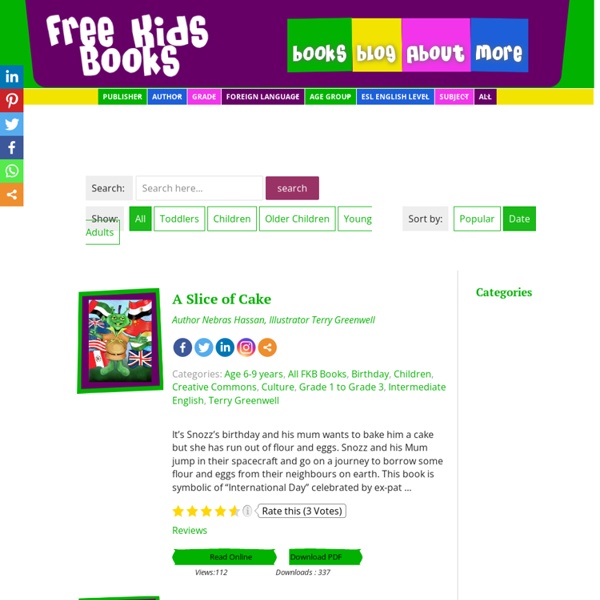 All About Apples Age Group: Toddlers Vanja Zogovic All about Apples is about eating apples and about sharing them. The main character, Hedgy the hedgehog loves apples. He finds out all sorts of fun things he likes to do with apples, roasting, dipping in chocolate, but most of all he loves to share them with friends.

Wikipedia:Book sources Select your region from the map above This page links to catalogs of libraries, booksellers, and other book sources where you will be able to search for the book with ISBN. If you arrived at this page by clicking an ISBN number link in a Wikipedia page, then the links below (those labeled "find this book") search for the specific book using that ISBN number. Enter another ISBN number in the ISBN search form to change the search links below. Spaces and dashes in the ISBN number do not matter. Words to the Wise: Aesop's Fables Interactive Book The Aesop for Children interactive book is designed to be enjoyed by readers of any age. The book contains over 140 classic fables, accompanied by beautiful illustrations and interactive animations. "Aesop's Fables"—also called "the Aesopica"—are a collection of stories designed to teach moral lessons credited to Aesop, a Greek slave and story-teller thought to have lived between 620 and 560 BCE. Aesop's fables are some of the most well known in the world and have been translated in multiple languages and become popular in dozens of cultures through the course of five centuries. They have been told and retold in a variety of media, from oral tradition to written storybooks to stage, film and animated cartoon versions—even in architecture. The fables remain a popular choice for moral education of children today.

Learning German Online for Beginners Learn German - online, simple, independently and for free! 10 tables build up an overview of basic German grammar. Basic verb forms and an introduction to German syntax are presented in a simple and understandable way. This German course was compiled with total beginners in mind. Free e-Books for Kids - The Mouse That Was The Mouse That Was is a story of a mouse that lived for months in a little hole below a small tree. When the mouse decided to explore the world little fact he knew that he has no relevance with the animals in the zoo! The short ebook story is all about searching happiness in different places without knowing that happiness is what we have! 8 Chic Sex Toys - Best Luxury Sex Toys 8 Sex Toys for the Chic Woman o r

English Listening Online Views: Biking in Cambodia Julia talks about cycing from Cambodia to Vietnam with her friends (Part 1, Part 2, Part 3, Part 4). Mixers : Bad Hair Cut Six people talk about getting a bad haircut. Plus, be sure to check out all the re-edited mixers with new activities 1-25, 26-50, 51-75, 76-100. New Videos for Mixer Listen to over 20 new videos with new speakers from Chile, Argentina, Canada, the U.S. and more. Scenes: Erina in Vancouver Listen as the series ends with Erina starting her new job at Campus Pizza Scene #6 and Scene #7. The Harvard Classics: A Free, Digital Collection During his days as Harvard’s influential president, Charles W. Eliot made a frequent assertion: If you were to spend just 15 minutes a day reading the right books, a quantity that could fit on a five foot shelf, you could give yourself a proper liberal education. The publisher P. F. Collier and Son loved the idea and asked Eliot to assemble the right collection of works.

The Ram : Egypt From the Eyes of Egyptians Egypt used to only be known for its pyramids. Now, it carries a record of major social upheaval and general unrest. Protests and violence are still present throughout the streets of Egypt. I'll tell you a story - Audio Written by Anonymous "The Story of the Three Bears" (sometimes known as "The Three Bears", "Goldilocks and the Three Bears" or, simply, "Goldilocks") is a fairy talefirst recorded in narrative form by British author and poet Robert Southey, and first published anonymously in a volume of his writings in 1837. The same year, British writer George Nicol published a version in rhyme based upon Southey's prose tale, with Southey approving the attempt to bring the story more exposure.