Nessie. Loch Ness "Sighting" Thrills Aficionados. The famous 1934 photo - whose authenticity has never been proven - that convinced some people that the Loch Ness monster is real. 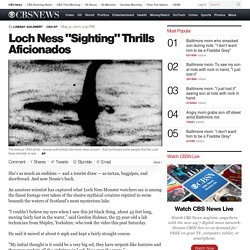 AP She's as much an emblem — and a tourist draw — as tartan, bagpipes, and shortbread. And now Nessie's back. An amateur scientist has captured what Loch Ness Monster watchers say is among the finest footage ever taken of the elusive mythical creature reputed to swim beneath the waters of Scotland's most mysterious lake. "I couldn't believe my eyes when I saw this jet black thing, about 45 feet long, moving fairly fast in the water," said Gordon Holmes, the 55-year-old a lab technician from Shipley, Yorkshire, who took the video this past Saturday. He said it moved at about 6 mph and kept a fairly straight course. Loch Ness "Sighting" Thrills Aficionados. 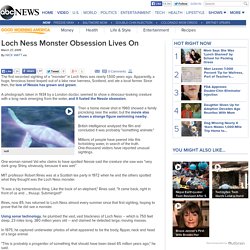 Apparently, a huge, ferocious beast leaped out of a lake near Iverness, Scotland, and ate a local farmer. Since then, the lore of Nessie has grown and grown. A photograph, taken in 1934 by a London doctor, seemed to show a dinosaur-looking creature with a long neck emerging from the water, and it fueled the Nessie obsession. null British intelligence analyzed the film and concluded it was probably "something animate. " Millions of people have peered into this forbidding water, in search of the truth. One woman named Val who claims to have spotted Nessie said the creature she saw was "very dark gray. MIT professor Robert Rines was at a Scottish tea party in 1972 when he and the others spotted what they thought was the Loch Ness monster. "It was a big tremendous thing. Big Foot and Loch Ness monster could exist. The Loch Ness Monster. Loch Ness is a deep lake in Scotland. 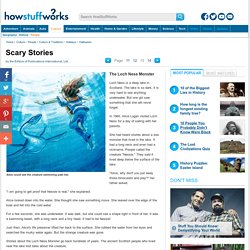 The lake is so dark, it is very hard to see anything underwater. But one girl saw something that she will never forget. In 1960, Alice Logan visited Loch Ness for a day of sailing with her parents. She had heard stories about a sea monster that lived in the lake. It had a long neck and even had a nickname. Loch Ness Monster Hoax. The hunt for the Loch Ness monster.

It all started over a hundred years ago and has grown into one of the world's most famous and enduring myths. 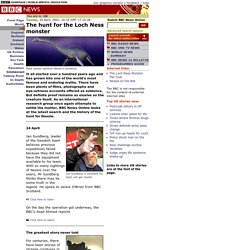 There have been plenty of films, photographs and eye-witness accounts offered as evidence. But definite proof remains as elusive as the creature itself. As an international research group once again attempts to settle the matter, BBC News Online looks at the latest search and the history of the hunt for Nessie. 24 April Jan Sundberg, leader of the Swedish team believes previous expeditions failed because they did not have the equipment available to his team. Click here to listen. Loch Ness Monster 1 › News in Science (ABC Science)

News in Science Dr Karl tells the true story behind the 1934 picture of the Loch Ness monster - it's a convoluted tale featuring a gynaecologist, a death-bed confession and a toy submarine. 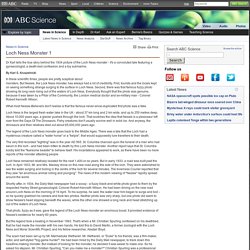 By Karl S. Kruszelnicki In these scientific times, people are pretty sceptical about monsters. Loch Ness Phenomenon - Not a Loch Ness Monster. The Loch Ness Monster is a well-known, even beloved icon for all kinds of believers and skeptics. 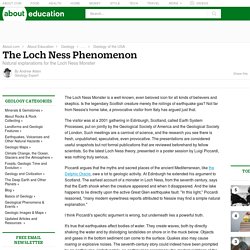 Is the legendary Scottish creature merely the roilings of earthquake gas? Not far from Nessie's home lake, a provocative visitor from Italy has argued just that. The visitor was at a 2001 gathering in Edinburgh, Scotland, called Earth System Processes, put on jointly by the Geological Society of America and the Geological Society of London. Such meetings are a carnival of science, and the research you see there is fresh, unpublished, speculative, even provocative.

The presentations are considered useful snapshots but not formal publications that are reviewed beforehand by fellow scientists. Piccardi argues that the myths and sacred places of the ancient Mediterranean, like the Delphic Oracle, owe a lot to geologic activity. I think Piccardi's specific argument is wrong, but underneath lies a powerful truth. It's true that earthquakes affect bodies of water. Loch Ness Monster: the strangest theories and sightings. An elephant? 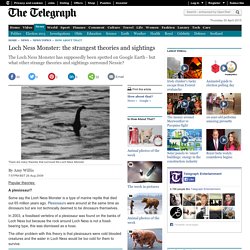 Neil Clark, curator of palaeontology at Glasgow University's Hunterian Museum, spent two years researching the Loch Ness Monster and concluded sightings could have been elephants enjoying a swim. He claims an elephant's trunk and hump (with the rest of the elephant submerged) resemble photographs of the monster. He says the elephants may have been from circuses visiting the area. An overgrown eel? The Beast of Loch Ness. The Beast of Loch Ness. Eyewitness Accounts While no hard evidence for the existence of the Loch Ness Monster has yet turned up, heaps of anecdotal evidence exist. 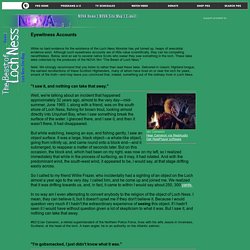 Although such eyewitness accounts are of little value scientifically, they can be compelling nevertheless. Below, lend an ear to several native Scots who swear they saw something in the loch. These tales were collected by the producers of the NOVA film "The Beast of Loch Ness. " Note: We strongly recommend that you listen to rather than read these tales. "I saw it, and nothing can take that away. " Well, we're talking about an incident that happened approximately 32 years ago, almost to the very day—mid-summer, June 1965. But while watching, keeping an eye, and fishing gently, I saw an object surface. Loch Ness Monster Hoaxes. Ancient Scottish legend told of a "beast" that lived in the waters of Loch Ness. 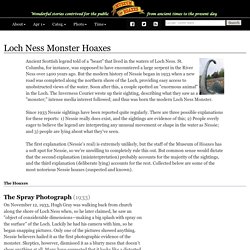 St. Legend of Nessie - Ultimate and Official Loch Ness Monster Site - About Loch Ness. About Loch Ness Important Information Please Read FirstAll sighting and photographic references on this page are documented and can be verified through various publications. 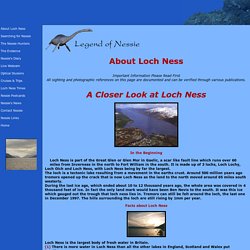 Untitled. Loch Ness Sea Monster Fossil a Hoax, Say Scientists. James Owen in Englandfor National Geographic News July 29, 2003 The world's favorite monster stole the headlines again this month, when the remains of a giant sea creature were discovered in Scotland's Loch Ness. But instead of hailing the find as possible evidence of the monster's existence, scientists now think it a hoax. The fossil belonged to a plesiosaur, a fearsome predator that ruled the seas between 200 and 65 million years ago. Measuring 35 feet (11 meters) head to tail, with a long, serpentine neck, the reptile eventually died out with the dinosaurs. Or did it? Of course, there are still plenty of skeptics, and four fossilized vertebrae, complete with blood vessels and spinal column, is the sort of thing that could help convince them.

The fossil was found by retired scrap metal dealer Gerald McSorley, from Stirling in Scotland. Photo in the News: Loch Ness Monster Was an Elephant? Monster of Loch Ness, The. By Micha F. Lindemans A legendary animal which lives in the depths of Loch Ness, a lake in the Highlands of northern Scotland. The size of this monster, Nessie as it is fondly called, is 12-15 m (40-50 ft) and it has a long, snake-like neck.

It is popularly believed to be female. The sightings date back to 565 CE when the Irish Saint Columba claimed he saw the Niseag (the Celtic name for Nessie) when he attended a burial for a man who had been bitten to death by the monster. Could unknown Okanagan creature be baby Ogopogo? VANCOUVER - A TV documentary crew has added to the mystery surrounding Ogopogo by finding an unknown biological specimen in the depths of Okanagan Lake. “I told a radio station tongue-in-cheek I thought it was the baby Ogopogo,” monster-watcher Bill Steciuk of Kelowna said Monday after the History Channel completed a nine-day shoot.

“It was all curled up. The features were really hard to see. You could see a little head tucked in and a straight tail with no fins. “It’s a huge mystery. The unidentified specimen has been shipped to the University of Guelph in Ontario for DNA tests, but Ogopogo buffs will have to wait until February to find out more, when the Monster Quest program weighs in on the legendary mega-serpent. Ogopogo, first sighted in the 1870s, is reputed to be 12 metres long with multiple humps and a small head. Lake Monsters: Ogopogo, Canadian Lake Monster. By Mark Chorvinsky There are a number of similarities between Lake Okanagan in British Columbia and Scotland's Loch Ness. They are both long and narrow and lie at about the same latitude.

And they are each famous for their resident monsters.