Asi (Mahabharata) Gladdened by these intelligent queries by Nakula, Bhishma related to him the complete Itihaasa (Sanskrit term for 'History') of the Khadga or "divine sword" starting from its creation down to the present (i.e., time of Bharata war). 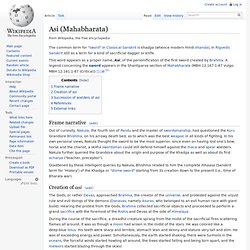 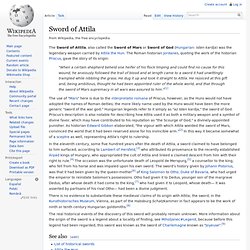 The Roman historian Jordanes, quoting the work of the historian Priscus, gave the story of its origin: "When a certain shepherd beheld one heifer of his flock limping and could find no cause for this wound, he anxiously followed the trail of blood and at length came to a sword it had unwittingly trampled while nibbling the grass. He dug it up and took it straight to Attila. Crocea Mors. Crocea Mors (Latin for "Yellow Death") was the name given to Julius Caesar's sword, according to the legends presented by Geoffrey of Monmouth. 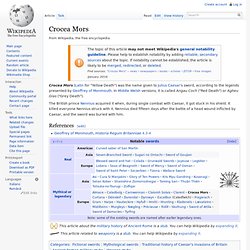 In Middle Welsh versions, it is called Angau Coch ("Red Death") or Agheu Glas ("Grey Death"). The British prince Nennius acquired it when, during single combat with Caesar, it got stuck in his shield. It killed everyone Nennius struck with it. Nennius died fifteen days after the battle of a head wound inflicted by Caesar, and the sword was buried with him. Gan Jiang and Mo Ye. Gan Jiang (Chinese: 干將; pinyin: Gān Jiàng) and Mo Ye (Chinese: 莫邪; pinyin: Mò Yé) were a swordsmith couple who lived during the Spring and Autumn Period of Chinese history. 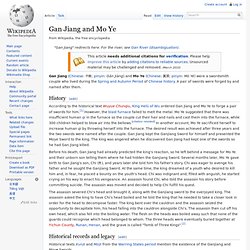 A pair of swords were forged by and named after them. History[edit] According to the historical text Wuyue Chunqiu, King Helü of Wu ordered Gan Jiang and Mo Ye to forge a pair of swords for him.[1] However, the blast furnace failed to melt the metal. Harpe. Keris Mpu Gandring. Sword Kladenets. Kladenets (Russian: меч-кладенец; also called самосёк [samosyok]) is a fabulous magic sword in some Old Russian fairy tales. 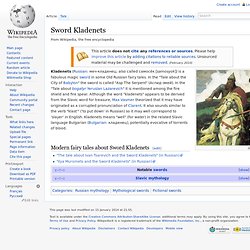 In the "Tale about the City of Babylon" the sword is called "Asp The Serpent" (Аспид-змей). In the "Tale about bogatyr Yeruslan Lazarevich" it is mentioned among the fire shield and fire spear. Although the word "kladenets" appears to be derived from the Slavic word for treasure, Max Vasmer theorized that it may have originated as a corrupted pronunciation of Clarent. It also sounds similar to the verb "klast'" ('to put down' in Russian) so it may well correspond to 'slayer' in English. Kusanagi. Sword of Peleus. Shamshir-e Zomorrodnegar. Shamshir-e Zomorrodnegār (Persian: شمشیر زمردنگار, 'the emerald-studded sword') is a sword in the Persian legend Amir Arsalan. 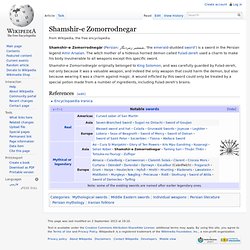 The witch mother of a hideous horned demon called Fulad-zereh used a charm to make his body invulnerable to all weapons except this specific sword. Shamshir-e Zomorrodnegār originally belonged to King Solomon, and was carefully guarded by Fulad-zereh, not only because it was a valuable weapon, and indeed the only weapon that could harm the demon, but also because wearing it was a charm against magic. A wound inflicted by this sword could only be treated by a special potion made from a number of ingredients, including Fulad-zereh's brains.

Encyclopaedia Iranica. Taming Sari. Description[edit] That kris, a short, asymmetrical double-edged sword or knife with spiritual powers, was said to have been made of 21 different types of metal. 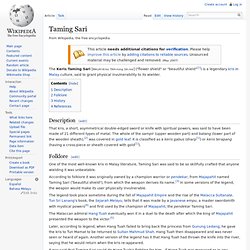 The whole of the sampir (upper wooden part) and batang (lower part of the wooden sheath),[2] was covered in gold leaf. It is classified as a keris gabus (sharp[1]) or keris terapang (having a cross-piece or sheath covered with gold[1]). Folklore[edit] One of the most well-known kris in Malay literature, Taming Sari was said to be so skillfully crafted that anyone wielding it was unbeatable.

According to folklore it was originally owned by a champion warrior or pendekar, from Majapahit named Taming Sari ("beautiful shield"), from which the weapon derives its name.[3] In some versions of the legend, the weapon would make its user physically invulnerable. Totsuka-no-Tsurugi. The Totsuka-no-Tsurugi (十拳剣? 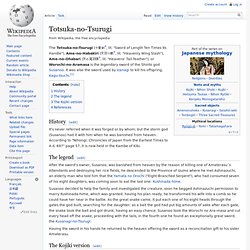 , lit. "Sword of Length Ten Times Its Handle"), Ame-no-Habakiri (天羽々斬? , lit. "Heavenly Wing Slash"), Ame-no-Ohabari (天の尾羽張? , lit. History[edit] It's never referred when it was forged or by whom; but the storm god (Susanoo) had it with him when he was banished from heaven. The legend[edit] After the sword's owner, Susanoo, was banished from heaven by the reason of killing one of Amaterasu´s Attendants and destroying her rice fields, he descended to the Province of Izumo where he met Ashinazuchi, an elderly man who told him that the Yamata no Orochi ("Eight-Branched Serpent"), who had consumed seven of his eight daughters, was coming soon to eat the last one: Kushinada-hime.

Susanoo decided to help the family and investigated the creature, soon he begged Ashinazuchi permission to marry Kushinada-hime, which was granted; having his plan ready, he transformed his wife into a comb so he could have her near in the battle. Thuận Thiên (sword) The Thuận Thiên sword was used to affirm the legitimacy of Lê Lợi as the Vietnamese leader in the revolution against the Ming occupation and associated with Lê Lợi the rightful sovereignty of Vietnam. 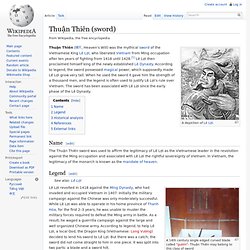 In Vietnam, the legitimacy of the monarch is known as the mandate of heaven. A 14th century single edged curved blade called "gươm"- Thuận Thiên may belong to this class of sword.