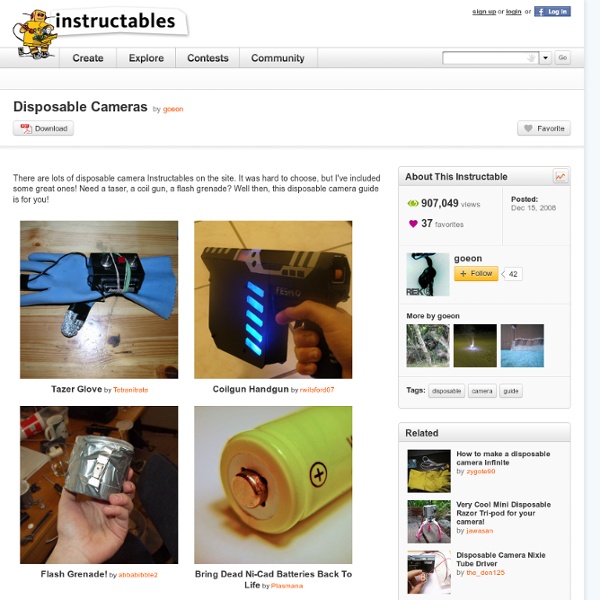 There are lots of disposable camera Instructables on the site. It was hard to choose, but I've included some great ones! Need a taser, a coil gun, a flash grenade? Well then, this disposable camera guide is for you! From simple everyday parts you can make this glove which has two modes. Mode 1 is a constant output of slightly over 300 v. while Mode 2 takes a few seconds to charge, but gives off a much more painfu... Learn how to make a simple but extremely effective Coil gun using only a "few" parts that are fairly easy to obtain by only going to a few places and possibly online. I've come up with a project that i've been contemplating for a long time. Are you tired of having your Ni-Cad batteries that refused to charge and simply die? Well... Caution I'm not liable if your shock yourself and injury or kill your self, working with high voltages can be dangerous!! Before I get too far in this instructable, I would like to say that this was not my original idea.

Tunnel Vision I know you are invited to at least one wedding this summer. Bring your camera. This is a neat way to present a special wedding picture. It's an old paper trick call a tunnel card. Simple animation to explain complex principles - Electronics 1, aircraft radial engine 2, oval Regulation 3, sewing machines The Web Design and Development Blog - StumbleUpon DesignWoop welcomes this guest post by Tomas Laurinavicius. Since the iPhone and iPad entered the market you can hear lots of news about apps for these devices. Tons of apps available today and you can find everything you want. But today I would like to share 10 handy web-based apps for designers. To use these apps you don’t need to buy an iPhone or iPad, you can use them without any additional software or device, you just need a web browser.

Tutorials If you haven’t yet taken a peek at the new Dark Fairytale series, you’re in for a treat! Urban Threadsters in particular seem to love their myth, lore, and legend, and also seem to share a love of books. And who doesn’t love books? Though, I will be honest, every time I go into a used bookstore I’m secretly hoping to come across a copy of the Necronomicon with an old, tattered leather cover with intricate engravings and spooky designs. I usually leave with a beat-up copy of a mystery novel.

UAE places restrictions on online dissent 13 November 2012Last updated at 12:36 ET Much of the law focuses on issues such as online fraud, privacy, prostitution and pornography The United Arab Emirates has tightened its law on internet use, making it a criminal offence to mock its rulers or organise unauthorised demonstrations. A presidential decree says anyone who creates or runs a website or uses the internet to deride or damage the state or its institutions faces imprisonment. The institutions include the rulers and senior officials across the federation of seven semi-autonomous Gulf emirates. Activists have criticised the move as an attempt to limit freedom of speech. Magenta Ain't A Colour A beam of white light is made up of all the colours in the spectrum. The range extends from red through to violet, with orange, yellow, green and blue in between. But there is one colour that is notable by its absence. You should have seen a green afterimage, but why is this significant? The afterimage always shows the colour that is complementary to the colour of the image.

Ric Rac Rose I love these easy-to-make Ric Rac Roses! Isn’t it beautiful? You can make these and use them in hair, on jewelry, on clothing, as embellishments on anything! And with The Ribbon Retreat’s large selection of Ric Rac, your possibilities are endless! They are also sold at an awesome price for $.65 a yard! Social media brings change in Gulf despite efforts at control 6 December 2012Last updated at 14:06 GMT By Bill Law Middle East analyst, BBC News Efforts to legislate online debate are having mixed results in the Gulf A recent decision by the United Arab Emirates to tighten restrictions on internet use has highlighted attempts by the authorities in Gulf states to staunch the flood of comment and criticism appearing on social media websites. The amendments to the UAE's existing law on internet crime were announced last month in a decree by President Sheikh Khalifa bin Zayed al-Nuhayyan, the ruler of Abu Dhabi. It says citizens who create or run a website or use the internet to deride or damage the state or its institutions face up to three years in prison.

TetraBox Light by Ed Chew Liquid to Light Designer Ed Chew takes a green step in the right direction with the TetraBox lamp, a light object made from discarded drink packets that would have otherwise ended up in landfills already packed to the brim. The design is achieved by unfolding the packets and refolding them into hexagonal and pentagonal sections that are then pieced together to form a geodesic sphere or any other desired shape.