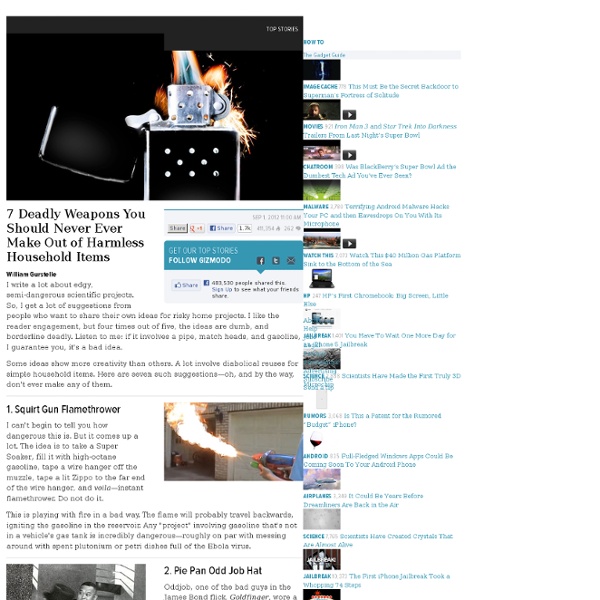 Having done 1, 3, and 4 in my teenage years I would definitely concur. Especially the thermite, that stuff will burn through the hood of a car, then the engine, axle, pavement, and dirt below it. Heinous stuff. However when you need to cut a large steel pipe and you don't have an acetylene torch it will do the job. Also, don't forget filling a tennis ball with match heads. That one is not only extremely flammable but completely uncontrollable and unpredictable.

How to Make Office Weapons Out of Office Supplies Wow, if you thought working at your white-collared job, sitting in your well equipped air-conditioned office, thinking that this is probably one of the safest place to be… you may just want to think twice about that. The office is a jungle. Beside having to watch your back against office colleagues who may be wolf in sheep’s clothes, you may just have to watch out for those seemingly utilitarian office supplies, because in conjuncture with other seemingly innocent office supplies, they may just result to be one of the deadliest office weapon yet. Below is an example of our favorite office supplies- binder clips, turned into office weapons. Take a few binder clips of varying sizes, turn them upside down, and clip the smaller binder clips inside the larger clips.

Kidnap Travel: French Company Offers Adrenaline Junkies Something Different Skydiving, BASE jumping, shark diving and other forms of near-death experience just not getting your adrenaline pumping anymore? French firm Ultime Réalité is now offering “kidnap packages”. For around 900 Euros, the firm will kidnap you at random, bound and gag you, and incarcarate you for up to 11 hours, depending on the “package” you choose. Candle Powered Space Heater If you burn candles, a couple of these could reduce heating costs… or heat your safe house while giving you some much needed light. The multi-core steel and ceramic radiator absorbs and concentrates the thermal energy of the candle and converts it into dry radiant space heat. Internal temperatures are over 500 deg and typical surface temperatures are 160-180 deg. This is a simple ingenious device that harvests the normally lost thermal energy of a candle flame.

The PriNXT: A Working Printer Made From Lego The next time you have a quick black and white image to print you might try sending it over to print out on your Lego bricks. A new project, called the PriNXT, is a simple but effective printer built out of everyone’s favorite toy. The PriNXT by Leon Overweel is made from Lego’s Mindstorm system that lets you add motors and some programming magic to your Lego projects. Even though he's just 14 years old, Leon managed to build the PriNXT along with a number of other Lego projects--including a Skype-controlled Lego Car. The printer essentially works like a traditional dot-matrix printer.

Private Islands Ever wondered how to own your own private island? With many of major cruise lines now owning their own white sandy beaches in the Caribbean here is a look into how we can own our own paradise too. Iglucruise is a award winning UK based cruise travel agency providing cruises from Southampton and great cruise deals to the Caribbean and Mediterranean Cruises. © Copyright Iglucruise 2010+ Small (600px width) <p><a href=" src=" border="0" alt="Private Islands /></a></p><p>Infographic by <a href=" 25 Simple Gadgets and Accessories - FizX Entertainment You know what they say, “less is more”, and these simple (yet awesome) gadgets are the perfect examples. While the “Slide to Unlock” doormat and superhero bookends don’t feature the latest in technology, they most certainly are eye candy as well as conversation pieces. Continue reading to see twenty five more.

Brain Scanner Records Dreams on Video Just a few weeks ago, we posted about how brain patterns can reveal almost exactly what you're thinking. Now, researchers at UC Berkeley have figured out how to extract what you're picturing inside your head, and they can play it back on video. The way this works is very similar to the mind-reading technique that we covered earlier this month. Best Alarm Clocks - 10 Funny Alarm Clocks and Reviews - Womans Day For most people, getting out of bed in the morning is a bit of a struggle. Luckily, the 10 clocks below are here to help. Some wake you up with an annoyingly loud noise, while others won't shut off until you complete a task--but they all promise to get even the sleepiest sleepyhead up and moving.

This is awesome News, Videos, Reviews and Gossip - io9 The Good: AMAZING effects and character design! The battle droids actually *looked* like devices built for live combat situations—heavily-armoured, heavily-ARMED, and just...heavy! The Bad: Revolvy 2in1 - Mixer and Blender Concept by Wonkook Lee & Yanko Design Blend and Mix in a Swoop The Revolvy 2in1 has a very curious shape for a blender and mixer. When not in use, the appliance just folds up to one discreet hanging gadget, freeing up precious kitchen-counter space.