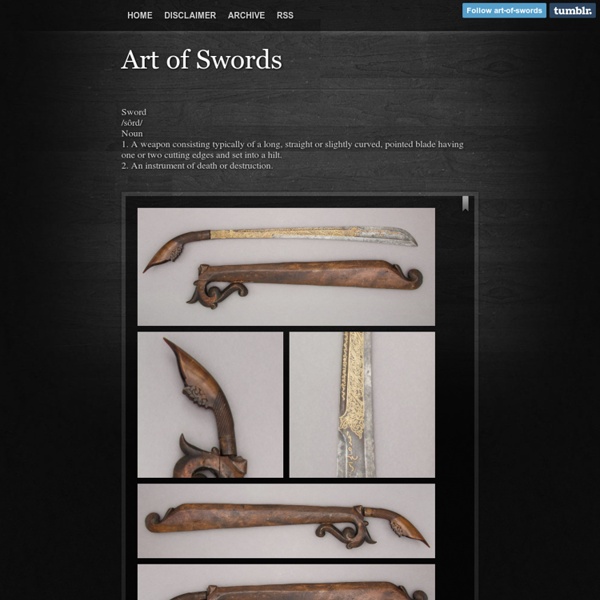 Permalink Presentation Knife Dated: 1575Maker: unknownMedium: iron, copper and woodPlace of creation: Western EuropeMeasurements: height 0.32m; width 0.06m; weight 0.286kg From the 14th to the end of the 16th century the fashion of gifting princely ceremonial and presentation items is spreading. Multiple sources, including the Chronicles of Olivier de la Marche, tell us about the feasts organized, for example, by the dukes of Burgundy, where a servants operated around the clock to satisfy the guests. The knife racks, wide bladed and not pointy, were used by the “sharp-riders” in charge of serving meat at the table. This particular knife is dated second half of the 16th century. Source: Copyright © 2015 Musée de l'Armée (Dist.

Georgia Knife Laws Georgia knife laws were rewritten in 2012 and, because of that, older articles on the internet are out of date. The new law is much simpler but that does not mean it is not confusing. This article will give you an understanding of the law in plain English. What is Legal to Own in Georgia Balisong knives, often called butterfly knives, are legal.Bowie knives and other large knives are legal.Throwing stars and throwing knives are legal.Disguised knives such as cane knives, belt knives, and lipstick knives are legal.Push knives, stilettos, switchblades, dirks, and daggers are legal.Spring powered ballistic knives are legal.Knives that are undetectable with a metal detector are legal. In Georgia, there are no limits on the possession of knives.

A Step Closer to the Mysterious Origin of the Viking Sword Ulfberht By Tara MacIsaac, Epoch Times Ulfberht was like a Medieval luxury brand for swords—but unlike your Gucci purse, the swords were of such high quality they were almost … mystical. Dozens of these swords—made with metal so strong and pure it’s baffling how any sword maker of that time could have accomplished it—have been found in Europe, along with some knock-offs. All Ninja Gear: Largest Selection of Ninja Weapons Authentic, Sharp, Real Ninja Throwing Stars From traditional to unique and everything in between, All Ninja Gear offers you a star to match your every ninja need! Featured products Flying Dragon Throwing Star Razor sharp edges and constructed from high quality AUS-6 steel.

Regenyei Armory Dear Customers, Considering the current supply and other technical problems (e.g.: tempering) we are dealing with right now, we will be able toaccomplish any further order/inquiry only from 1st of December 2015! Regarding to this situation please don't e-mail me untill that, as i will not be able to answer. History of fencing: Geometrical images of sword-fighting by Gerard Thibault. The Vault is Slate's history blog. Like us on Facebook, follow us on Twitter @slatevault, and find us on Tumblr. Find out more about what this space is all about here.

Medieval swords, European Martial Arts, Viking sword, sabres, rapiers, swordplay, historical fencing - wulflund.com We are glad that through Wulflund (Replica Sword Shop) we can offer you replicas of weapons that are constructed for sword fight or they can serve as an accessory for historical costumes (sharp daggers or sharpened swords). It the category of Weapons you can also find hand-forged knives and viking saxes that you can use during outdoor events or trips to the nature. In addition to our large offer of commonly favourite repicas of cold weapons (swords, rapiers, daggers, sabres, axes, poleweapons, basket hilt swords) we have special section with firearms (muskets and cannons). Those of you who are interested in traditional archery will be probably joyous of English longbows and arrows that are historical authentic. Be careful during using all replicas of weapons and we wish you a lot of pleasure with our products.

An Introduction to the Sword An Introduction to the Sword: Part I Page 1 of 2 — Go to: 12Next The sword is an edged weapon with a long blade designed for delivering cutting blows or thrusts, or both. It first appeared in the prehistoric period; once copper had been mastered, the dagger was fitted with an increasingly longer blade, until it became in effect a short sword. This new weapon was clearly superior for combat at close quarters and, accordingly, led to the decline of the dagger, which took on a secondary, complementary role and remained in use for hand-to-hand combat. The copper swords had been based on the forms of earlier stone daggers; later, bronze was cast to resemble the copper swords.