On Land by Bike

Premium Dutch Bicycles available in North America. Great American Rail-Trail: A Coast-to-Coast Bike Path Is Coming to the United States. The Great American Rail-Trail will connect 12 states from coast to coast when it’s finished. share this article A road trip may be the classic way to traverse the United States, but cyclists will eventually be able to make the cross-country bike trip a reality on a newly created trail system. 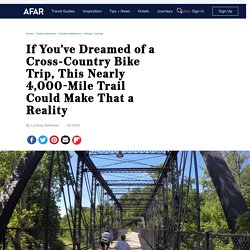 Once it is completed, the Great American Rail-Trail will connect more than 3,700 miles of repurposed train routes and multi-use trails—all separate from vehicle traffic—across 12 states from Washington, D.C., to Washington State. Here’s everything we know about it so far. Where will the route go? In May, the Rails-to-Trails Conservancy (RTC) revealed the route that will connect 125 existing trails with another 90 “trail gaps,” or sections that will need to be developed to turn the new Great American Rail-Trail into one contiguous path. To see a more detailed view of the route, explore the interactive map here. Twelve gateway trails will form the backbone of the coast-to-coast route. 7 Commuter Bikes You Can Still Buy Online. One of the effects of Covid-19 that seems like it will stick around even after things begin to improve is that people will try to avoid public transportation whenever possible. 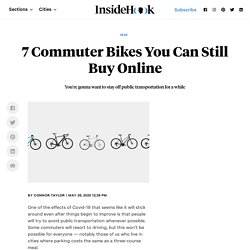 Some commuters will resort to driving, but this won’t be possible for everyone — notably those of us who live in cities where parking costs the same as a three-course meal. For many commuters, riding a bike will be the answer. But since this whole thing started, and especially since the weather has started warming up, many online retailers’ stocks have been depleted. Below, seven worthy options that are still available. World’s biggest bike garage is obviously in the Netherlands, because the car is king in the US.

Today, I was nearly killed no less than three times while biking from my apartment in Brooklyn to my office in Lower Manhattan. 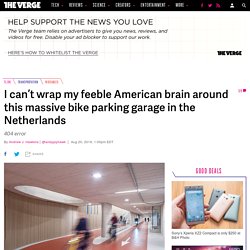 But don’t worry! This is pretty normal for America’s largest city, where a staggering 19 cyclists have been killed in just 2019 alone. So you can imagine my bafflement when I finally sat down at my desk, sweaty and stressed out from my close brushes with death, and the first thing I see when opening up Twitter was this video of a newly finished bike parking garage in the Dutch city of Utrecht. Serene images of row after row of double-decker bike racks, with space for 12,500 (!) Bicycles, were technically absorbed by my retina, where they were converted into electrochemical impulses and transferred along the optic nerve to my brain. How could this exist? I’ve heard that there are more bikes than people in the Netherlands. Now this bicycling nirvana isn’t new; I’ve seen a variety of photos and videos from inside this facility creep into my timeline over the years. 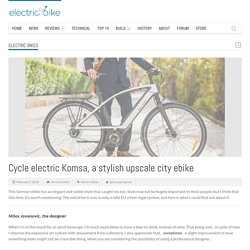 Style may not be hugely important to most people, but I think that this time, it’s worth mentioning. The mid drive it uses is only a mild EU street-legal system, and here is what I could find out about it. Milos Jovanovic, the designer When I’m in the mood for an adult beverage, I’m much more likely to have a beer to drink, instead of wine. That being said…in spite of how I observe the expensive art culture with amusement from a distance, I also appreciate that…sometimes…a slight improvement in how something looks might not be a horrible thing, when you are considering the possibility of using a professional designer… Milos Jovanovic, and…on the right is a lamp that he designed.

Milos is one of many designers working at the “Behance” design studio in Germany. Bicycle Speed Record Broken - Denise Mueller-Korenek Bikes at 183.93 MPH. This Wild Concept Might Become the World’s Most Efficient Bicycle Drivetrain. Alpaca Bike is all about folding flat. "Airlines charge money if your bike is oversized," explained Vermeulen, who is a professor of Mechanical Engineering at Colorado State University. 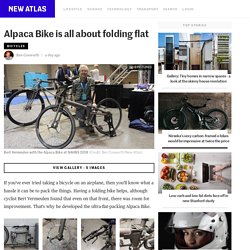 "So I said, what I want is a bike that for all intents and purposes is just a normal road bike – uses normal [700c-sized] road bike wheels – and yet it's got to pack in this small suitcase. " One particular challenge to meeting that goal was the wheels. When two conventional wheels are packed side-by-side, their hubs line up with one another, making the suitcase too wide once allowing for the frame to be in there with them (according to the case's combined length, width and height).

Burke 20 is a titanium folding bike that fits into your suitcase within seconds. The burke series of titanium folding bikes are based on worldwide-patented designs by dr. mike f. yap, engineering professor, cycling enthusiast, and founder at the personal mobility solutions company ‘seattle cycles’. he is also the creative mind behind the award winning design of the airnimal folding bikes. this project presents ‘burke 20′, which is the first full titanium folding bike made in the USA, by lynskey performance. the Burke 20 can be folded and packed into a suitcase in seconds, without complicated assembly or use of tools david lynskey, the frame builder of burke 20, is a founder of the well-known litespeed bicycles company and one of the pioneers of titanium frame manufacturing. 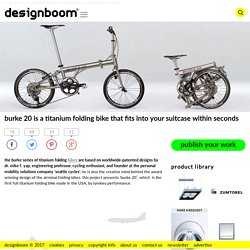 ‘the burke 20 is a high performance folding bike engineered to be light, fast, and tough. David and mark lynskey, pioneers of titanium bicycle manufacture in the USA lynskey has been working with titanium for three generations all welding and machining work is done in chattanooga, tennessee. The piaggio ciao racer by OMT garage is a supercharged moped. OMT garage wins the deus bike build-off with the piaggio ‘ciao’ racer’s sleek ‘silhouette’. this little green bike’s low and slender body adds stability at high-speeds, while a natural cork saddle, and a tiny handcrafted tank keep weight to a minimum. all images © OMT garage / deus milano OMT garage’s brotherly owners felt they had to honor the moped as it was the first form of motorcycle they owned at 14 years old. the bike itself is a 1982 piaggio ‘ciao PX’ or, simply ‘ciao’ to those more familiar with it. with it’s handmade bespoke tank, reinforced and modified chassis, and racing fairings, the garage transforms this little racer into the ‘ciao’s’ super-quick cousin. 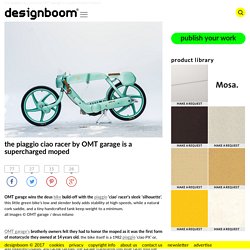 Compact, claw-like carbon bike keeps things minimal, on road and off. A different style of compact bike from the many folding bikes we see here at New Atlas, the Minimal Bike keeps things simple, clean and light. 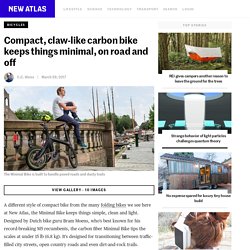 Designed by Dutch bike guru Bram Moens, who's best known for his record-breaking M5 recumbents, the carbon fiber Minimal Bike tips the scales at under 15 lb (6.8 kg). It's designed for transitioning between traffic-filled city streets, open country roads and even dirt-and-rock trails. The frame of the Minimal Bike has a distinctive three-pronged presence and looks more like a claw than a bike frame. It also has a more integrated design than the usual bike, with welded tubes and quick-release components replaced with a frame, seat post, stem and handlebars that flow together as if carved from a solid block of carbon. That whole package isn't actually a single piece, but Moens has gone to the trouble of structuring the parts that way, creating flowing transitions and recessing attachment hardware for a smoother look. 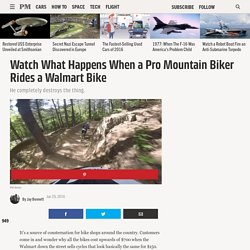 Customers come in and wonder why all the bikes cost upwards of $700 when the Walmart down the street sells cycles that look basically the same for $150. VanMoof's new bike boasts extra smarts. Although e-bikes are becoming increasingly popular, we're also hearing more and more about smart bikes – these are bikes that don't have a motor, but that do have electronic features designed to make life easier for their riders. 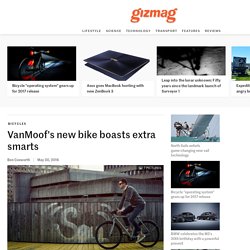 Dutch manufacturer VanMoof has just jumped on the bandwagon with its aptly-named SmartBike, which should prove particularly challenging to thieves. Like its recently-announced motorized sibling the Electrified S, the SmartBike features a speed-displaying LED touchscreen built into the top tube. It also comes with a chain lock, the two ends of which plug into an electronic locking mechanism that's likewise contained within the frame's tubing. Should the SmartBike be stolen anyway, an onboard tracking mechanism allows its whereabouts to be monitored using the app. Somerset bike's oval-shaped frame slides components for convenient folding. Feb 02, 2016 somerset bike's oval-shaped frame slides components for convenient folding somerset bike’s rounded frame glides components for convenient folding all images courtesy kaiser chang the ‘somerset’ bike by kaiser chang has an oval-shaped tube frame that acts as a slide rail, adapting the front fork to slide down to transform to a hand cart for quick transporting needs. this design’s circular steel structure and semi-arc frame gives ‘somerset’ a fresh form to city riding. the problem most riders are facing are transportation needs between the home and the mass transit system followed by the tail end of a commute to their job. kaiser chang’s design targets a market of foldable bicycles that can co-exist with transit and bus stations. since the folding process of the bike is convenient, the whole system can be easily changed into an electric folding bike, for added flexibility.

INVINCIBLE: End Bike Theft. Once and For All. by Slava Menn —Kickstarter. Fortified's new bike is intended to be Invincible to thieves. You've no doubt seen lots of them around town – rusting, abandoned bikes with all the components stripped away. Their owners haven't even bothered reclaiming their frames, as they were just cheap old "city beater" bikes in the first place. 3D-printed compostable bike frame is made from plants. With the exceptions of wood and bamboo, bicycle frames usually aren't made from sustainable resources. And although some programs do exist, we generally don't think of old bike frames getting recycled.

Add it all up, and you have a bike that's ready for anything that the trail can throw at it HANDLINGShorter chainstays at 420/437mm, and same low bottom bracket height at 335/336mm. HANDLINGGeometry built from the ground up for 650b or 29” wheels, with a slacker head tube at 67/67.5° and 150/135mm travel (650b/29”). UTILITYOn the down tube, the SWAT Door unhinges so you can store what you need inside the Trail Chassis. UTILITYFACT carbon Trail Chassis is built with storage in mind, while still delivering the perfect ride quality. Autos - The 10 most beautiful bicycles of 2015. Best Commuter Bikes- Gear Patrol. Top 10 cycling innovations of 2014. Bicycle historians, take note – it's time once again to look back at 10 of the bike-related products that most caught our attention over the past year! As with our lists from 2012 and 2013, these aren't necessarily things that we think are destined to be big sellers.

In fact, it's entirely possible that this might be the last you hear of many of them. We like 'em, though, because they're examples of what happens when people dare to try something different ... and that sort of spirit is the reason why we're not still all riding penny farthings. Rogue C6. Commuter 7.0. MC2 wants to be 8 bikes in 1. Well, another day, and another oddball transforming bicycle from Eurobike 2014. Product. Bygen's Hank Direct Bike swaps a chain for direct-drive levers. The Hank Direct Bike offers an alternative to traditional folding bikes ... and to chains or belt drives.

Yerka Project. Universal Bike – one frame to fit them all. One of the hassles involved in buying a bicycle is determining what frame size you should get. The size that works with one make and model isn't always the best choice for another, plus you might sometimes find that your particular measurements put you "between" sizes. Additionally, even if you get the frame dimensions right, you may discover that components such as the handlebar stem are too long or short. 5 Best Cruiser Bikes for Men. First ever connected carbon fibre bicycle by Ali Zahid. On-board sensors measure your calories burned, distance traveled, speed, best times, and much more. This Bike Not Only Stops You From Making Pollution, It Eats It.