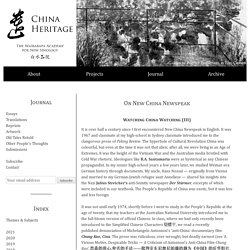 It was 1967 and classmate at my high-school in Sydney classmate introduced me to the clangorous prose of Peking Review. The hyperbole of Cultural Revolution China was colourful, but even at the time it was not that alien; after all, we were living in an Age of Extremes, it was the height of the Vietnam War and the Australian media bristled with Cold War rhetoric. Ideologues like B.A. Santamaria were as hysterical as any Chinese propagandist. It was not until early 1974, shortly before I went to study in the People’s Republic at the age of twenty, that my teachers at the Australian National University introduced me to the full-blown version of official Chinese. Despite official Chinese protests, Chung Kuo, Cina was, however, screened on Australian public television. I never forgot those early lessons. — Geremie R. Watching China Watching Contents New China Newspeak 新華文體 Geremie R. Something in the Air – China Channel. Geremie R. 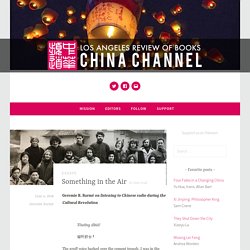 Barmé on listening to Chinese radio during the Cultural Revolution Tōutīng dítái! 偷听敌台！ When ballet became revolutionary: Xue Jinghua and ‘The Red Detachment of Women’ The Delicate Dance of Loyalty. The “loyalty dance,” or zhongziwu (忠字舞), was a collective dance that became prevalent during the Cultural Revolution, at a time when Mao Zedong and his image reigned supreme over all aspects of life in China. 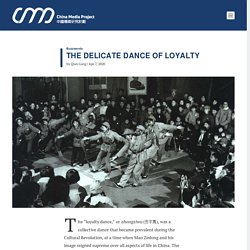 The dancers, grasping their copies of the “little red book,” Quotations From Chairman Mao, would dance, leap and shout to the impassioned ring of the music – all to express their boundless loyalty to the Chairman. One slogan older Chinese may remember from that time, related to the loyalty dance, is the “Three Loyalties” (三忠于): loyalty to Chairman Mao; loyalty to Mao Zedong Thought; loyalty to Chairman Mao’s revolutionary line. 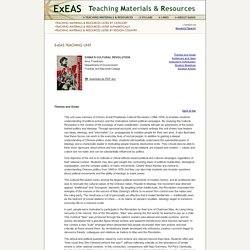 By studying the Cultural Revolution in the context of the sociology of mass mobilization, students will gain an awareness of the power behind politics and ideology. Through personal accounts and scholarly writings this unit shows how leaders use ideas, ideology, and “information” (i.e. propaganda) to mobilize people for their own aims. It also illustrates how these forces can work in the everyday lives of normal people. In addition to gaining a deeper understanding of Chinese politics under Mao, students will hopefully understand the substantial power of ideology and a charismatic leader in motivating people towards destructive ends. One objective of the unit is to cultivate a critical attitude toward political and cultural campaigns regardless of their national context. 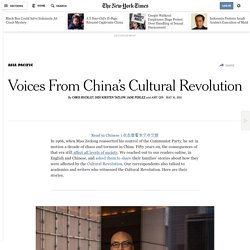 Wu, a human rights activist and retired professor, was teaching at a university in Beijing when the movement began. Her parents were prominent intellectuals. I knew I would become a target because of my parents. My daddy served in the Kuomintang government and later was labeled a rightist. 1966 My Time in the Red Guards - Media Hopper Create - The University of Edinburgh Media Platform. China's Cultural Revolution. Picturing Power: Posters of the Cultural Revolution. October 6-22, 1999 | Hopkins Hall Gallery and CorridorThe Ohio State University | College of the Arts East Asian Studies Center Indiana University[Contains: the project, events schedule, online gallery, University of Westminster Archive, SoFa Gallery, related links, what's new, contact] PICTURING POWER (School of Fine Arts Gallery, Indiana University, USA) [UPDATE: THE LINK FOR THIS PAGE IS NO LONGER VALID] CENTRE FOR THE STUDY OF DEMOCRACY (U of Westminster, London) *Please note: Not all of the images contained within our Online Exhibition sections are copyrighted property of The Huntington Archive. 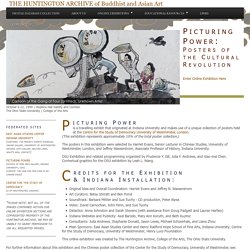 We may be unable to grant permission to use all requested images. 国庆阅兵 China National Day Parade 1970. How the Cultural Revolution changed China forever. Mao's declaration condemned the Chinese Communist Party (CCP), the army and the government for having been infiltrated by "representatives of the bourgeoisie" and "counter-revolutionary revisionists. 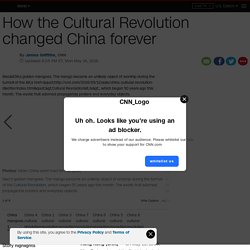 " Hundreds of thousands of people were killed as the country fell into what Dikotter describes as civil war, with different Red Guard and People's Liberation Army (PLA) factions fighting each other, and millions more were displaced and traumatized as society broke down around them. Everyday Life in Maoist China. Morning Sun. CHP-083-The Cultural Revolution Part 1. The Memory Project. Collection Pilot Duke University Libraries has received a $40,000 grant from the Council on East Asian Libraries of the Association for Asian Studies to support the processing of the Memory Project archives. 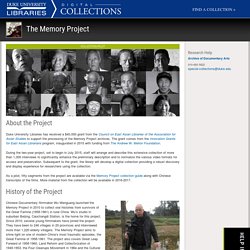 The grant comes from the Innovation Grants for East Asian Librarians program, inaugurated in 2015 with funding from The Andrew W. Mellon Foundation. During the two-year project, set to begin in July 2015, staff will arrange and describe this extensive collection of more than 1,000 interviews to significantly enhance the preliminary description and to normalize the various video formats for access and preservation. Subsequent to the grant, the library will develop a digital collection providing a robust discovery and display experience for researchers using the collection.