On the Trail of Xi Jinping: a new Podcast by Jane Perlez. U.S. 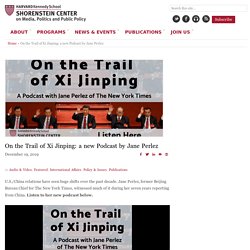 /China relations have seen huge shifts over the past decade. Jane Perlez, former Beijing Bureau Chief for The New York Times, witnessed much of it during her seven years reporting from China. Listen to her new podcast below. You can also download it via Apple Podcasts, or your preferred podcast app. On the Trail of Xi Jinping follows the rise of China’s current leader, and how the West got him so wrong. On the Trail of Xi Jinping was produced and edited by Jeb SharpAssistant producer: Helen Zhang Researcher: Luz DingSound design: Tina Tobey Mack.

Special thanks to the Shorenstein Center on Media, Politics and Public Policy at Harvard Kennedy School, including Nancy Gibbs, Tom Patterson and Liz Schwartz. Thanks also to Harvard’s Ash Center, the Fairbank Center and the Belfer Center for Science and International Affairs for all your support. Click here to read a full transcript of this podcast. How Xi Jinping Took Control of China. Xi’s predecessor, Hu Jintao, read his annual New Year’s greeting from a lectern in an antiseptic reception hall. 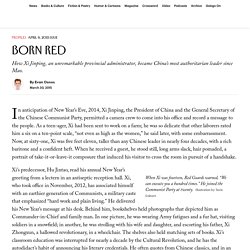 Xi, who took office in November, 2012, has associated himself with an earthier generation of Communists, a military caste that emphasized “hard work and plain living.” He delivered his New Year’s message at his desk. Behind him, bookshelves held photographs that depicted him as Commander-in-Chief and family man. Why Are There No Biographies of Xi Jinping? Read: How Xi Jinping blew it There are other issues. 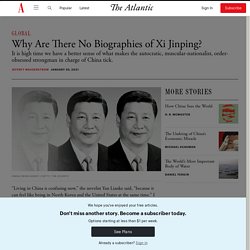 Xi’s “defining trait before coming to power was his caution,” the American University assistant professor of politics Joseph Torigian told me. He also noted that the study of elite politics, at least in a biographical sense, has gone out of fashion in academic political science. Last but not least, there is a fear factor—a worry that writing a critical book on Xi could lead to future difficulties in accessing China, to say nothing of other forms of online and real-world targeting. China Sentences Ren Zhiqiang, Xi Critic, to 18 Years in Prison. Ren Zhiqiang, the property tycoon nicknamed “Big Cannon,” was notorious for his blunt criticisms of the Communist Party, and yet his wealth and political connections long seemed to shield him from severe punishment. 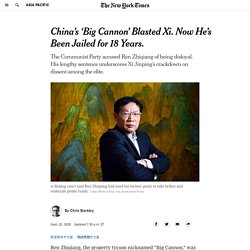 Until now. A court in Beijing sentenced Mr. Ren to 18 years in prison on Tuesday. The court said he was guilty of graft, taking bribes, misusing public funds and abusing his power during and after his time as an executive at a property development company. Mr. “Very clearly this was punishment for his words, that’s going to be obvious to everyone,” Guo Yuhua, a sociologist in Beijing, said by telephone. Mr. “Cracking down on Ren Zhiqiang, using economic crimes to punish him, is a warning to others — killing one to warn a hundred,” said Cai Xia, an acquaintance of Mr.

“It’s a warning to the whole party and especially to red offspring,” Ms. At 69, Mr. So far, the Beijing Second Intermediate People’s Court has issued few details of the evidence that it said proved Mr. Mr. Mr. China's New Revolution. In China’s Coronavirus Crisis, Xi Sees a Chance to Strengthen His Rule. Before an adulatory crowd of university professors and students, China’s leader, Xi Jinping, offered a strikingly bold message about the global coronavirus pandemic. 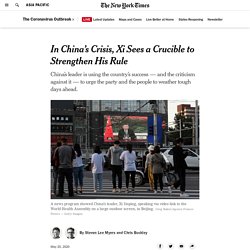 Summoning images of sacrifice from Communist Party lore, he told them that the calamity was ripe with possibility for China. “Great historical progress always happens after major disasters,” Mr. Xi said during a recent visit to Xi’an Jiaotong University. “Our nation was steeled and grew up through hardship and suffering.” Mr. Now, Mr. He is pushing to restore the pre-pandemic agenda, including his signature pledge to eradicate extreme poverty by this year, while cautioning against complacency that could let a second wave of infections spread. He must do all this while the country faces a diplomatic and economic climate as daunting as any since the Tiananmen Square crackdown in 1989.

Xi's Cult of Personality. Competition, the Coronavirus, and the Weakness of Xi Jinping. Over the past few years, the United States’ approach to China has taken a hard-line turn, with the balance between cooperation and competition in the U.S. 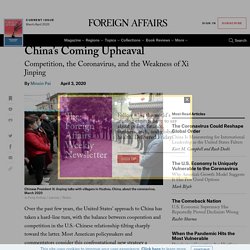 -Chinese relationship tilting sharply toward the latter. Most American policymakers and commentators consider this confrontational new strategy a response to China’s growing assertiveness, embodied especially in the controversial figure of Chinese President Xi Jinping. The Meaning of Xi Jinping Thought. At the end of October, the Chinese Communist Party held its 19th National Congress. 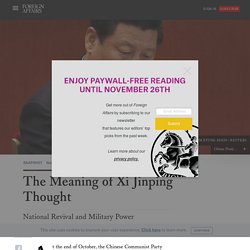 The CCP has held these gatherings every five years since 1977, when Deng Xiaoping, the father of reform-era China, took power at the 11th party congress. Views in Chinese Xi Jinping and the CPC 25092018. Peak Xi Jinping? At the start of the Cultural Revolution in May 1966, Lin Biao, the man who had created the Little Red Book of Mao quotations and who was the head of China’s People’s Liberation Army, declared: “Every statement by Chairman Mao is the Truth; one sentence of his is worth more than 10,000 sentences of ours.” 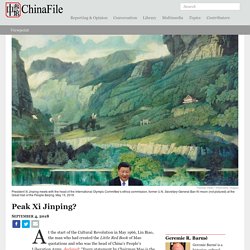 He added: “Chairman Mao’s words are the guide for our actions. Whoever opposes him will be obliterated by the whole Party and denounced by the whole nation.” In a rambling speech at the same meeting, Zhou Enlai hailed Mao as the unparalleled leader of world revolution and Mao Zedong Thought as “the apex of Marxism-Leninism.” Mao claimed that he had reluctantly agreed to the personality cult created by Lin Biao, but until his death in September 1976, his name was sacrosanct, his image sacred, and his words holy writ. For a time, when greeting each other or starting phone conversations, people were required to recite a Mao quote as a benediction.

“The Relevant Organs” Twitter Account. China's summer of discontent. CLAREMONT, CALIFORNIA – Politics has a nasty habit of surprising us — especially in a country like China, where there is little transparency and a lot of intrigue. 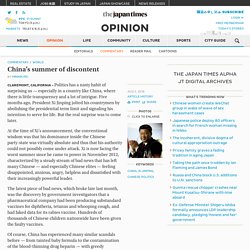 Five months ago, President Xi Jinping jolted his countrymen by abolishing the presidential term limit and signaling his intention to serve for life. But the real surprise was to come later. What the West Doesn’t Get About Xi Jinping.