CHINA ~ vs ~ CANADA & THE WORLD as I have said for years! 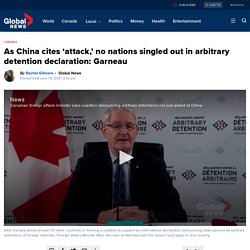 In an article published in the Global Times, an English-language paper that effectively functions as a mouthpiece for the Chinese government, Chinese experts were cited calling the declaration an “ill-considered attack designed to provoke China.” Spy chief says China is bent on stealing Canadian secrets, silencing critics. OTTAWA — The head of the Canadian Security Intelligence Service warns that China is undermining Canada through its efforts to steal valuable technology and silence critics of Beijing's policies. © Provided by The Canadian Press In a speech Tuesday sponsored by the Centre for International Governance Innovation, CSIS director David Vigneault said all sectors of Canadian society must work together to fend off these threats. 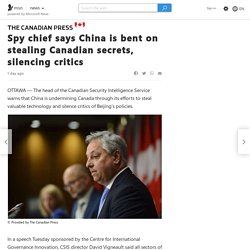 Vigneault stressed that Canadians have benefited for decades from their relationship with Chinese researchers, scholars, artists, business people and others. "To be clear, the threat does not come from the Chinese people, but rather from the government of China that is pursuing a strategy for geopolitical advantage on all fronts — economic, technological, political and military," he said. China law empowers coast guard to use force amid disputes. BEIJING — China has authorized its coast guard to fire on foreign vessels and destroy structures on features it claims, potentially raising the possibility of clashes with regional maritime rivals. © Provided by The Canadian Press The Coast Guard Law passed on Friday empowers the force to “take all necessary measures, including the use of weapons, when national sovereignty, sovereign rights, and jurisdiction are being illegally infringed upon by foreign organizations or individuals at sea.” 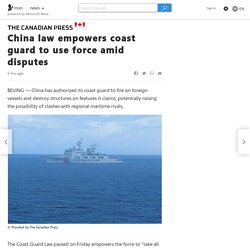 Canada has 'significant' concerns about China: Defence Minister. OTTAWA — Defence Minister Harjit Sajjan is taking aim at what he describes as China’s unpredictability, refusal to play by the rules and expanding footprint around the world, saying those are among the “significant” concerns Canada and its allies have with Beijing. © Provided by The Canadian Press The comments come amid growing alarm over China’s increasingly assertive foreign policy, which has led Canadian military commanders and others to increasingly focus on what is being described as the next great power competition. 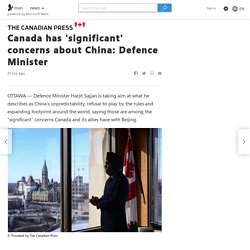 The last great power competition saw Canada and its NATO allies face off against the Soviet Union during the Cold War. Sajjan declined in an interview with The Canadian Press to describe China as an adversary even as he emphasized the importance of talk and diplomacy in dealing with the Chinese government. “The unpredictability that China has been showing the world — not just to Canada — is giving all of us significant concern,” he said. China used 'microwave' pulse weapon to force Indian soldiers off Himalayan hilltops: report. According to the Times, a professor at a Beijing university said that on Aug. 29, some months after the initial fighting began, China used microwave weaponry to win a strategic area. 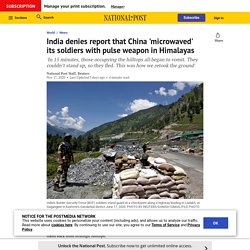 The professor, Jin Canrong, who is based at Renmin University in Beijing, said two contested hilltops were deliberately turned “into a microwave oven.” The international relations expert claimed the operation wasn’t made public at the time, for two reasons. The acid test: Western diplomats ponder the problem of dealing with a more aggressive China. It was an ominous beginning to an ominous conversation about how western democracies should face the growing authoritarian reflexes of China on the world stage. 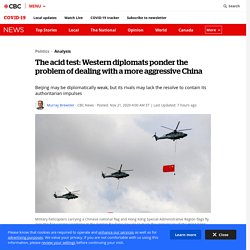 One of the marquee panels at the Halifax International Security Forum, held virtually this year, began on Friday with a grainy, grey video of an elephant being chased and eventually overpowered by a pride of lions. It was a stark visual metaphor for Beijing's relative isolation as a world power — the fact that China is a powerful nation with few allies, while western democracies are overwhelming when they act in concert. There was, however, a palpable sense of dismay among some of the panellists when the conversation turned to whether the international community is a pride of lions or a collection of kittens.

If we don't believe what we stand for is better, if we don't believe in the rule of law, democracy, freedom, why should anyone else listen to us? - Former U.K. defence secretary Liam Fox. Canada granted consular access to Canadian facing death penalty in China. Canada’s ambassador to China, Dominic Barton, has been granted consular access to a Canadian detained in China for the first time since late January. 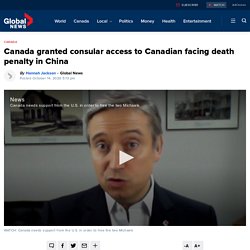 In an update released Wednesday afternoon, Global Affairs Canada said Barton was granted virtual access to Robert Schellenberg. The statement said the agency continues to offer consular services to Schellenberg and his family. However, Global Affairs Canada said under provisions of the Privacy Act, no further information would be disclosed. “Canada continues to call for clemency for Robert Schellenberg, as we do for all Canadians facing the death penalty,” the statement reads. “Canada opposes the use of the death penalty in all cases, everywhere, and will undertake clemency intervention in all cases of Canadians facing execution.” 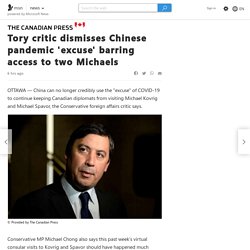 "COVID-19 is an excuse that doesn't hold water," Chong said in an interview Sunday. "The economy in China has largely reopened," he added. "A direct in-person visit should have already taken place a long time ago with appropriate social distancing. " COMMENTARY: When China gets up to no good, Canada must do more than wag a finger. A whack of documents supplied to some international media over the weekend has provided evidence of China’s attempts to identify westerners — including nearly 4,000 Canadians — who could be attacked through coercive social media or other types of cyber warfare. 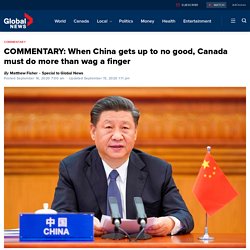 This shocking revelation, which first appeared in Canada in the Globe and Mail, is a dark complement to research that an Australian think tank published recently about what China is up to in the remote South Pacific. The Australian Strategic Policy Institute (ASPI) provides details of a significant play that China is making to co-opt Kiribati, which is made up of three archipelagos scattered across a swath of sea that is half as wide as Australia. Trudeau dodges questions on meetings with alleged illegal casino operator. Prime Minister Justin Trudeau on Wednesday dodged questions stemming from a report he has twice met with a Chinese businessman recently charged with running an illegal high-end Toronto gambling ring. 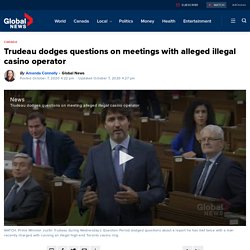 York Regional Police last week busted what they allege was a high-end, illegal gambling operation run out of a Markham, Ont., mansion involving armed guards and human trafficking. READ MORE: Dozens charged, millions in property and cash seized in alleged illegal casino bust: York police Among those charged is a 52-year-old man named Wei Wei. Diane Francis: China's waging a global tech war, but our political leaders seem unaware. The Quad and the European Union are concerned that Huawei’s infrastructure will be used to spy on, and exert control over, Western governments, businesses and societies — especially given that it is being implemented alongside China’s massive Belt and Road Initiative, which is designed to control essential physical infrastructure, and governance, in strategically important countries.

Canada’s failure to take action against Huawei, or work with its allies to counter the Chinese threat, is inexcusable considering that Nortel, the Canadian company that was a pioneer of cellular technologies, was Huawei’s first target. As a Bloomberg investigative piece — headlined, Did a Chinese Hack Kill Canada’s Greatest Tech Company? — documented in July, there is now a large body of evidence that Huawei stole intellectual property from the once-mighty Canadian telecom giant, and drove it out of business. Untitled. Untitled. From the South China Sea to the Himalayan Sino-Indian border, and even in one of its own cities, China has doubled down on its claims of territory, and taken a harder line in response to perceived challenges. And as those disputes escalated this year with renewed and rising tensions, Xi has bulked up the military and increased its budget, with the instruction to "resolutely safeguard national sovereignty, security and development interests.

" Here's what you need to know about China's key flashpoints in the Asia-Pacific region. Dotted with small islands, reefs and shoals, the South China Sea is a crucial global shipping route and home to a messy territorial dispute. Who claims what: China claims it owns almost all of the 1.3 million square mile South China Sea, but at least six other governments also have overlapping territorial claims in the contested waterway: the Philippines, Vietnam, Malaysia, Indonesia, Brunei and Taiwan. Untitled. By Staff The Canadian Press Posted March 12, 2020 10:45 am A national security and intelligence watchdog says China and Russia are meddling in Canada’s affairs. In a report today, the National Security and Intelligence Committee of Parliamentarians singles out the two countries for trying to exploit the openness of Canadian society and penetrating key institutions for their own ends.

Canada and the West are at war with Russia whether they want it or not: military experts. Russian aggression is the greatest challenge facing Canada and Western democracies right now as the Kremlin tries to dismantle the rules-based international order that’s existed since the end of the Second World War, military experts are warning. And as a result, some say Canada and its allies should consider themselves already at war with Russia. “This is not an interwar period. The war is on,” said Frederick Kagan, resident scholar at the American Enterprise Institute and an expert on critical threats. “The principal challenge is our own failure to recognize we are involved in a great-scale conflict with Russia.” Kagan and others spoke on a Wednesday panel discussion organized by the CDA Institute for its annual Ottawa Conference on Security and Defence. Untitled. The crew of a U.S. Coast Guard cutter was surprised this summer to find the Chinese and Russian navies conducting a joint exercise in open water in the Arctic Ocean.

Details about what was apparently a serendipitous discovery of the Chinese and Russian vessels by the U.S. Coast Guard were sparse. Until this chance encounter near the top of the world, Western countries with an interest in the Far North, such as Canada, Denmark (Greenland), Norway, the United Kingdom, France and the United States, were unaware of what was going on, a former commandant of the coast guard told a recent virtual conference hosted by the Defense News. READ MORE: (March 4, 2020) Canada and the West are at war with Russia whether they want it or not, military experts say The intelligence lapse was telling.

Story continues below advertisement Despite underwater monitoring systems, as the U.S. Untitled. Untitled. Untitled. Untitled. Untitled. China up to something? Beijing’s new Pakistan compound may indicate navy plans – expert. New satellite images show several new complexes have been built in the last few years. The complexes are surrounded by unusually high-security apparatus, Mr Sutton noted in an article for Forbes. The fortified complex has anti-vehicle spikes, security fences and a high wall. @lunaefay @BernardKerik @DEn8tive77 CCP never stops its scheme to take down America since day 1. Their scheme just escalaes as time goes by. Infographic below shows their Unresteicted Warfare Against US which includes information war online &amp; offline,

United Front groups in Canada helped Beijing stockpile coronavirus safety supplies. China supports ‘inclusive review’ of coronavirus response while pointing finger at U.S. China hits back at Alberta Premier Jason Kenney after he called for a 'reckoning' Increased foreign threat to COVID-19 research prompts extraordinary warning from Canada's spy agencies. Trudeau says world has questions ‘particularly’ for China on COVID-19 origin. Kenney slams China's handling of COVID-19, urges North American 'onshoring' COMMENTARY: With Trump rebuffed, Canada should join other western leaders standing up to China. Daphne Bramham: Canada needs to stand up to China and protect its own citizens from intimidation at home. A Chinese lawyer criticized the regime’s handling of the pandemic. Then he disappeared. B.C. politician breaks silence: China detained me, is interfering ‘in our democracy’ Trudeau says Canada won’t back down against ‘increasingly assertive’ China. Former Hong Kong politician tells Trudeau to have courage in dealing with China.