Stockton, California, gave people a basic income. It boosted employment. The city of Stockton, California, embarked on a bold experiment two years ago: It decided to distribute $500 a month to 125 people for 24 months — with no strings attached and no work requirements. 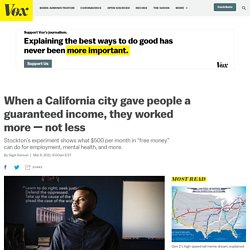 The people were randomly chosen from neighborhoods at or below the city’s median household income, and they were free to spend the money any way they liked. Meanwhile, researchers studied what impact the cash had on their lives. Stockton’s Basic-Income Experiment Pays Off. “The big change was how it helped me see myself,” Tomas Vargas, another recipient, told me. 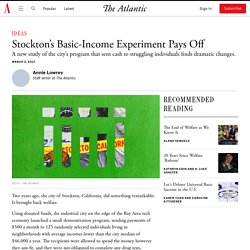 “It was dead positive: I am an entrepreneur, I think of business ideas, I make business choices, I want to be financially stable.” When the program started, he worked in logistics. Now, in addition to nurturing his side projects, he is a case manager for individuals on parole. Economics of biodiversity review: what are the recommendations?

Economics' failure over destruction of nature presents ‘extreme risks’ The world is being put at “extreme risk” by the failure of economics to take account of the rapid depletion of the natural world and needs to find new measures of success to avoid a catastrophic breakdown, a landmark review has concluded. 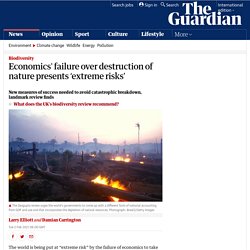 Prosperity was coming at a “devastating cost” to the ecosystems that provide humanity with food, water and clean air, said Prof Sir Partha Dasgupta, the Cambridge University economist who conducted the review. Radical global changes to production, consumption, finance and education were urgently needed, he said. The 600-page review was commissioned by the UK Treasury, the first time a national finance ministry has authorised a full assessment of the economic importance of nature. A similar Treasury-sponsored review in 2006 by Nicholas Stern is credited with transforming economic understanding of the climate crisis.

The Global Risks Report 2021. Who’s Afraid of MMT? by James K. Galbraith. It is not surprising that current and retired central bankers feel threatened by Modern Monetary Theory. 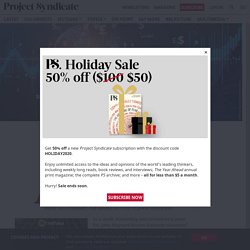 With deep roots in the Keynesian tradition and a consistent commitment to achieving full employment, MMT shows that good economics and sound policy doesn't have to be shrouded in obscurantist cant. AUSTIN – As anyone who has ever been responsible for legislative oversight of central bankers knows, they do not like to have their authority challenged. How Community Land Trusts can advance racial equity in our cities. There are now between 225 and 280 community land trusts in the US, which together have around 15,000 home ownership units and 20,000 rental units. 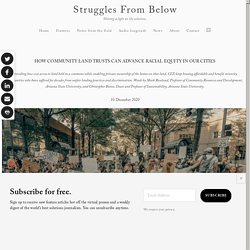 To encourage more of this type of development, New York City passed a bill in 2017 exempting community land trusts from certain taxes. Houston in 2019 announced a plan to use a community land trust to develop 1,000 affordable units. In the UK, there is a growing CLT movement that fits into a long history of community ownership and management of housing and assets—indeed, the original Garden Cities had a community trust that owned and managed land assets on behalf of the community.

In the early 2000s, the CLT movement in the US served as an inspiration for a number of English academics and housing and community development professionals. A National CLT Demonstration programme supported a number of pilot projects, and in 2010 the UK National CLT Network was established to support the growing CLT movement and advocate on behalf of CLTs. Recovery Is Not Enough by H.T. Goranson & Beth Cardier.

While it is understandable that business and political leaders are desperate for a return to normal, thinking in such terms is a mistake. 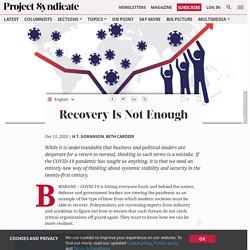 If the COVID-19 pandemic has taught us anything, it is that we need an entirely new way of thinking about systemic stability and security in the twenty-first century. BRISBANE – COVID-19 is hitting everyone hard, and behind the scenes, defense and government leaders are viewing the pandemic as an example of the type of blow from which modern societies must be able to recover. Policymakers are convening experts from industry and academia to figure out how to ensure that such threats do not catch critical organizations off guard again. Tail risks - A surge in inflation looks unlikely.

IN 1975 Adam Fergusson, a journalist on the Times, published a book called “When Money Dies”. 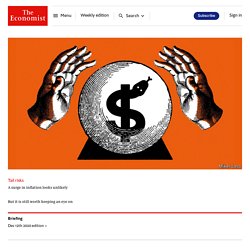 A history of hyperinflation in Germany in the early 1920s, it was written with an eye to what was going on in the then-present day. Inflation in Britain was not at the prices-soaring-day-by-day levels seen in the Weimar Republic. But in 1975 it reached an unprecedented 24%—grim enough for Fergusson’s warning that the experience of inflation was “totally absorbing, demanding complete attention while it lasts” to hit home. How Inequality Reduces Growth William Janeway. How Inequality Reduces Growth by William H. Janeway. US President-elect Joe Biden may have promised a “return to normalcy,” but the truth is that there is no going back. 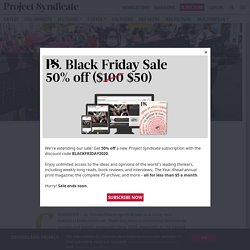 The world is changing in fundamental ways, and the actions the world takes in the next few years will be critical to lay the groundwork for a sustainable, secure, and prosperous future. For more than 25 years, Project Syndicate has been guided by a simple credo: All people deserve access to a broad range of views by the world’s foremost leaders and thinkers on the issues, events, and forces shaping their lives. At a time of unprecedented uncertainty, that mission is more important than ever – and we remain committed to fulfilling it. But there is no doubt that we, like so many other media organizations nowadays, are under growing strain. Canada’s forgotten universal basic income experiment - BBC Worklife. But when the experiment ended in 1979, the improvements which had been seen in health and education soon returned to how things had been in 1974. 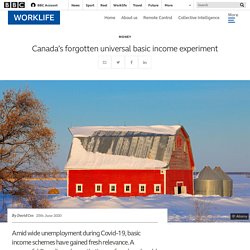 Taylor remembers how many of the small businesses that had sprung up over the preceding four years began to vanish. Her husband was forced to close their shop, and the couple soon left Dauphin for good. “After the programme ended, we moved to Ontario in 1980 because there was nothing to stay for anymore,” she says. Breaking the tragedy of the horizon - climate change and financial stability - speech by Mark Carney.

The Governor says the financial sector must help the transition to ‘net zero’ (a neutral carbon footprint). Businesses need to keep improving their disclosure of climate risks. To support that aim, he says the Task Force on Climate-related Financial Disclosures (TCFD) should: share best practice to increase the quantity and quality of climate related disclosures give a definitive view on what is a high quality disclosure spread knowledge on how to measure and use information on strategic resilience more widely consider how asset owners should disclose how well their portfolios are placed for the transition to net zero – barbaragrieve

How economics became a religion. Although England has an established church, few of us today pay it much mind. 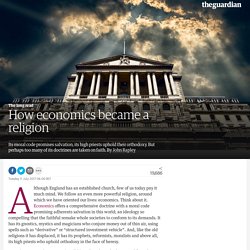 Everyone – from the government, to housing charities, to housebuilders – has bought into the conventional wisdom that the dysfunction that racks our housing market is a matter of demand and supply. We’re not building enough houses, so house prices have been sent rocketing, taking home-ownership out of reach for growing numbers of young people. But in reality, our housing problems are not a simple feature of supply and demand. Rather, our housing market has a bitcoin problem. What has bitcoin mania got in common with house prices, especially in the capital?

Old Economics Based on False ‘Laws of Physics’ Things are not going well in the world’s richest economies. Most OECD countries are facing their highest levels of income inequality in 30 years, while generating ecological footprints of a size that would require four, five or six planet Earths if every country were to follow suit.

These economies have, in essence, become divisive and degenerative by default. Mainstream economic theory long promised that the solution starts with growth – but why does that theory seem so ill-equipped to deal with the social and ecological fallout of its own prescriptions? The answer can be traced back to a severe case of physics envy. Complexity Economics Shows Us Why Laissez-Faire Economics Always Fails. By Eric Liu and Nick Hanauer During 2007 and 2008, giant financial institutions were obliterated, the net worth of most Americans collapsed, and most of the world’s economies were brought to their knees.

At the same time, this has been an era of radical economic inequality, at levels not seen since 1929. Over the last three decades, an unprecedented consolidation and concentration of earning power and wealth has made the top 1 percent of Americans immensely richer while middleclass Americans have been increasingly impoverished. Get Evonomics in your inbox. Radical New Economic System Will Emerge From Capitalism's Collapse. At the very moment of its ultimate triumph, capitalism will experience the most exquisite of deaths. This is the belief of political adviser and author Jeremy Rifkin, who argues the current economic system has become so successful at lowering the costs of production that it has created the very conditions for the destruction of the traditional vertically integrated corporation.

Speech given by Mark Carney, Governor of the Bank of England 2 March 2018 – barbaragrieve