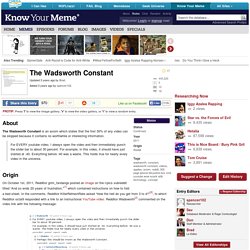 For EVERY youtube video, I always open the video and then immediately punch the slider bar to about 30 percent. For example, in this video, it should have just started at :40. Everything before :40 was a waste. This holds true for nearly every video in the universe. Origin On October 1st, 2011, Redditor grim_fandango posted an image on the r/pics subreddit titled “And so ends 20 years of frustration,” which contained instructions on how to fold a bed sheet. Redditor Redebo replied to Wadsworth saying, “perhaps this should be known as the Wadsworth Constant.” Spread. The Fall of Pinterest. Mr. Bones' Wild Ride. About Mr. 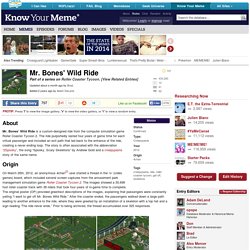 Bones’ Wild Ride is a custom-designed ride from the computer simulation game Roller Coaster Tycoon 2. The ride purportedly lasted four years of game time for each virtual passenger and included an exit path that led back to the entrance of the ride, creating a never ending loop. The story is often associated with the abbreviation “2Spooky”, the song “Spooky, Scary Skeletons” by Andrew Gold and a creepypasta story of the same name. Origin On March 26th, 2012, an anonymous 4chan user started a thread in the /v/ (video games) board, which included several screen captures from the amusement park management simulation game Roller Coaster Tycoon 2.

Creepypasta After the 4chan thread was posted, a creepypasta surfaced about a user visiting the Busch Gardens theme park while on vacation, where he discovers a strange ride as he wanders the park. So anyone who’s been on the /v/ board at 4chan. probably knows about Mr. Now here’s where things get really good. Spread T-Shirt.

On the Internet, nobody knows you're a dog. Peter Steiner's cartoon, as published in The New Yorker History[edit] In response to the comic's popularity, he stated, "I can't quite fathom that it's that widely known and recognized".[1] Context[edit] The cartoon marks a notable moment in the history of the Internet. 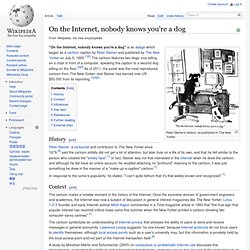 Once the exclusive domain of government engineers and academics, the Internet was now a subject of discussion in general interest magazines like The New Yorker. The cartoon symbolizes an understanding of Internet privacy that stresses the ability of users to send and receive messages in general anonymity. Influences[edit] The Apple Internet suite Cyberdog was named after this cartoon.[14] See also[edit] References[edit] ^ Jump up to: a b c d e f Fleishman, Glenn (December 14, 2000). Further reading[edit] Jones, Christopher R. (2004).

Tesla. Horseecomics. Warlizard Gaming Forum. About Warlizard is a very prolific reddit user with the username Warlizard, whose comments are always replied with someone asking variations of “Are you the guy from the warlizard gaming forum?” 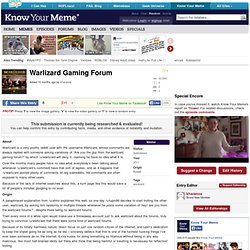 By which /u/warlizard will deny it, claiming he have no idea what it is. Over the months many people have no idea what everybody’s been talking about whenever /u/warlizard’s comment have that sort of replies, and as it happens that /u/warlizard posted plenty of comments on big subreddits, his comments are often exposed to many other users. Because of the lack of internet searches about this, a kym page like this would save a lot of people’s minutes googling to no avail. Origin A paraphrased explanation from /u/atmo explained this well, so one day /u/lupin86 decides to start trolling the other user, warlizard, by asking him randomly in multiple threads whenever he posts some variation of ‘hey!

External References. Main Page - LOLCat Bible Translation Project. Smile.jpg. Smile,jpg, also known as Smile.dog, is a creepypasta story about a haunted image that drives those who view it insane. 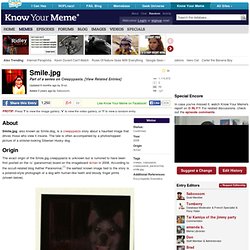 The tale is often accompanied by a photoshopped picture of a sinister-looking Siberian Husky dog. The exact origin of the Smile.jpg creepypasta is unknown but is rumored to have been first posted on the /x/ (paranormal) board on the imageboard 4chan in 2008. According to the occult-related blog Aether Paranormal, the earliest known image tied to the story is a polaroid-style photograph of a dog with human-like teeth and bloody finger prints (shown below). The things Mary said made little sense but fit with the pattern I was expecting: though I could not see her, I could tell from her voice that she was crying, and more often than not her objections to speaking with me centered around an incoherent diatribe on her dreams -- her nightmares. Encounters with smile.jpg are the stuff of internet legend.

Mary E., I assumed, was not on effective medication. And I could. Yes.