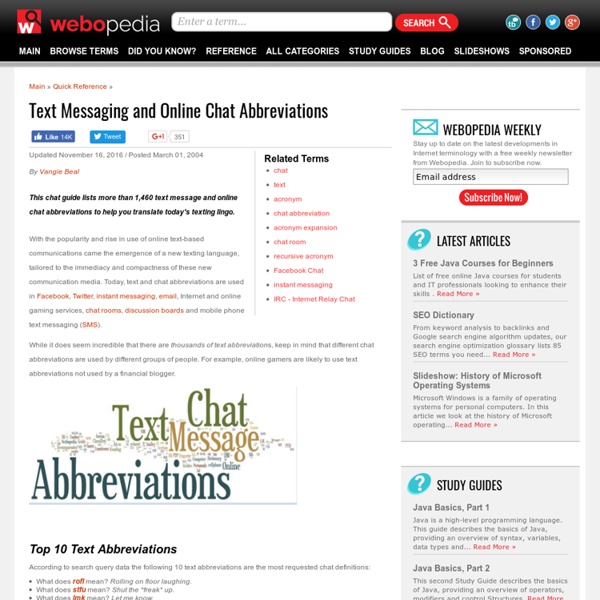 Updated November 16, 2016 / Posted March 01, 2004 By Vangie Beal This chat guide lists more than 1,460 text message and online chat abbreviations to help you translate today's texting lingo. With the popularity and rise in use of online text-based communications came the emergence of a new texting language, tailored to the immediacy and compactness of these new communication media. Today, text and chat abbreviations are used in Facebook, Twitter, instant messaging, email, Internet and online gaming services, chat rooms, discussion boards and mobile phone text messaging (SMS). While it does seem incredible that there are thousands of text abbreviations, keep in mind that different chat abbreviations are used by different groups of people. Top 10 Text Abbreviations According to search query data the following 10 text abbreviations are the most requested chat definitions: What does rofl mean? List of 1,461 Online Chat and Text Message Abbreviations The History of Text Messaging

What secrets are hiding in these runes? The top of the Rök runestone. The inscription begins on this side. (Photo: Science Photo Library) “In memory of Vemod stand these runes. But Varin wrote them, the father, in memory of his dead son” Thus starts the text carved into the Rök runestone, which has puzzled researchers since it was discovered built into a 12th century church wall in Sweden’s Östergötland County in the 1600s.

Text Chat Emotions Main » Quick Reference » Posted May 21, 2009 Use a Smiley Face to Show Emotion in Text Messages and Online Chat A smiley face (also called a smiley or emoticon) is used in text-based communications to convey an emotion, much in the same way we use body language. Text smiley faces are used in the same way that a person's voice or facial expression changes when having a face-to-face conversation with someone. The Many Types of Identity Theft There are several types of identity theft. Knowing what to do if you are a victim of identity theft starts by knowing what type of identity theft you are dealing with. Financial Identity Theft When we hear the words "identity theft" we usually think of credit reports and bank accounts.

Capital - The secret to stopping your ‘ummms’ You've researched your topic, prepared your speech and dressed the part. But when it comes time to wow your audience, you can tell they are underwhelmed. Could the problem be filler words? Texting Abbreviations Next: Feel the fear and do it anyway! (or: do you own a piece of the English language yet?) >>Previous: << What is a Reverse Mortage? What you need to know Major Mike’ receives burial worthy of the decorated war dog he was A highly unusual memorial and burial, in the small rural farming town of Powell, Wyoming, was held Wednesday to celebrate and lay to rest a soldier. This soldier loved chasing tennis balls and chewing on them, his reward for a job well done in the war zone. In fact, whenever he discovered anything round and relatively soft, he was giddy. He served two harrowing tours of duty in Iraq with distinction and was promoted to major when he retired from an Army special operations group. The military had named him K-9 Mike 5 #07-257, but he came to be known as “Major Mike,” or Michael, as his war and peacetime partner, retired Army ranger Matthew Bessler, liked to call him.

Researchers "Translate" Bat Talk. Turns Out, They Argue—A Lot Plenty of animals communicate with one another, at least in a general way—wolves howl to each other, birds sing and dance to attract mates and big cats mark their territory with urine. But researchers at Tel Aviv University recently discovered that when at least one species communicates, it gets very specific. Egyptian fruit bats, it turns out, aren’t just making high pitched squeals when they gather together in their roosts. They’re communicating specific problems, reports Bob Yirka at Phys.org. According to Ramin Skibba at Nature, neuroecologist Yossi Yovel and his colleagues recorded a group of 22 Egyptian fruit bats, Rousettus aegyptiacus, for 75 days. Using a modified machine learning algorithm originally designed for recognizing human voices, they fed 15,000 calls into the software.

10-essential-european-gestures-to-learn-before-your-next-trip?email=puhnner@hotmail I’ll never forget one of the first nights I went out in Barcelona in a group of Americans and locals. One of them, a guy called Nacho, was telling us about the best places around for drinks and dancing, often describing the vibe with his hands—without using actual words. At that point in my life, I was fluent in Spanish but not in Spanish hand gestures, so translating Nacho’s opinions was all but impossible. About Everbrite For over 85 years, Everbrite has been providing innovative visual identification and LED lighting solutions to leading companies throughout the world. An award winning certified Women's Business Enterprise (WBE), Everbrite is one of the largest, full service visual identification companies in the United States. Headquartered in Greenfield, Wisconsin, Everbrite has seven (7) sales and manufacturing facilities strategically located throughout the United States and abroad. Everbrite's state-of-the-art Technology Center, adjacent to our Corporate Headquarters, is dedicated to the development of new products and processes. As the Total Image Source for visual identification and LED lighting, Everbrite differentiates itself from the competition through:

Twisted textile cords may contain clues to Inca messages Animal-hair cords dating to the late 1700s contain a writing system that might generate insights into how the Inca communicated, a new study suggests. Researchers have long wondered whether some twisted and knotted cords from the Inca Empire, which ran from 1400 to 1532, represent a kind of writing about events and people. Many scholars suspect that these textile artifacts, known as khipus, mainly recorded decimal numbers in an accounting system. Yet Spanish colonial documents say that some Inca khipus contained messages that runners carried to various destinations. Now a new twist in this knotty mystery comes from two late 18th century khipus stored in a wooden box at San Juan de Collata, a Peruvian village located high in the Andes Mountains.