"Although sub-Saharan Africa consumes less electricity than Brazil, by 2040 its demand will reach a level equal to 2010 consumption in Latin America and India combined"

Africa added 556 MW of on-grid solar in Q1 2019. According to new statistics released by African Energy Live Data, solar represents more than half of total new power generation capacity for the first three months of this year. 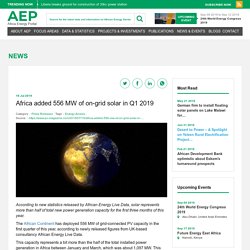 The African Continent has deployed 556 MW of grid-connected PV capacity in the first quarter of this year, according to newly released figures from UK-based consultancy African Energy Live Data. This capacity represents a bit more than the half of the total installed power generation in Africa between January and March, which was about 1,097 MW. This was, however, the lowest level of total new installed energy capacity achieved for the continent on a quarterly basis since 2011.

Despite a difficult start to the year, new additions for 2019 are expected to be in line with recent years, as a significant number of large state-owned power plants are scheduled to begin operating, according to the consultancy. Photo credit: qimono, pixabay. Africa Renewables Index [2016 Data] by Country. Africa: Renewable Energy Sources Could Be Cheaper Than Fossil Fuels Within 10 Years - UN-Backed Report.

A new United Nations-backed report has revealed overwhelming consensus that renewable power will dominate in the future, with many experts saying that even large international corporations are increasingly choosing renewable energy products either from utilities or through direct investment in their own generating capacity. 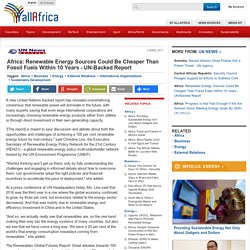 "[The report] is meant to spur discussion and debate about both the opportunities and challenges of achieving a 100 per cent renewable energy future by mid-century," said Christine Lins, the Executive Secretary of Renewable Energy Policy Network for the 21st Century (REN21) - a global renewable energy policy multi-stakeholder network hosted by the UN Environment Programme (UNEP). "Wishful thinking won't get us there; only by fully understanding the challenges and engaging in informed debate about how to overcome them, can governments adopt the right policies and financial incentives to accelerate the pace of deployment," she added.

Berkeley Researchers Map Out Renewable Energy Future For Africa. Clean Power Published on March 28th, 2017 | by Joshua S Hill March 28th, 2017 by Joshua S Hill Researchers from the University of California Berkeley have mapped out what they believe to be a viable strategy for Africa to steadily increase its development of renewable energy sources like wind and solar, while simultaneously reducing the continent’s reliance on fossil fuels and lowering power plant construction costs. 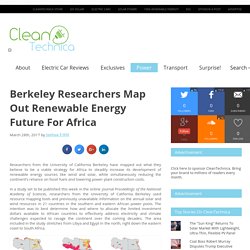 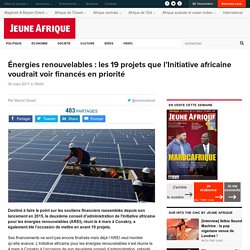 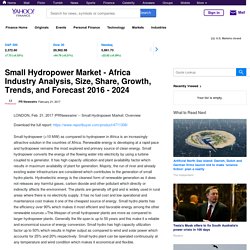 Renewable energy is developing at a rapid pace and hydropower remains the most explored and primary source of clean energy. Small hydropower converts the energy of the flowing water into electricity by using a turbine coupled to a generator. It has high capacity utilization and plant availability factor which results in maximum availability of plant for generation. Can wind and solar fuel Africa's future? Mainstream Renewable Power Jeffreys Bay Wind Farm in South Africa generates enough energy to power 100,000 homes there. 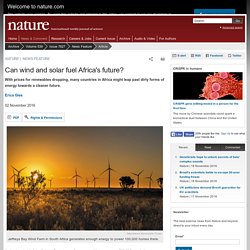 At the threshold of the Sahara Desert near Ouarzazate, Morocco, some 500,000 parabolic mirrors run in neat rows across a valley, moving slowly in unison as the Sun sweeps overhead. How green is Africa′s energy supply? Under the Paris Agreement, the world has committed to keeping global warming below 2 degrees Celsius – and ideally below 1.5 degrees. 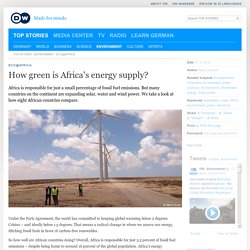 That means a radical change in where we source our energy, ditching fossil fuels in favor of carbon-free renewables. So how well are African countries doing? Overall, Africa is responsible for just 3.5 percent of fossil fuel emissions – despite being home to around 16 percent of the global population. Africa’s energy infrastructure is far less developed than in the carbon-heavy economies of America, Europe and China, for example. Solar could be a bright future for Africa as costs fall. Solar is a strong contender to bridging the energy gap throughout Africa, as installation costs fell by as much as 61 per cent over the past four years, the International Renewable Energy Agency (Irena) said today. 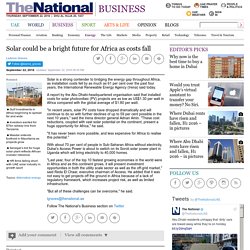 A report by the Abu Dhabi-headquartered organisation said that installed costs for solar photovoltaic (PV) projects are as low as US$1.30 per watt in Africa compared with the global average of $1.80 per watt. "In recent years, solar PV costs have dropped dramatically and will continue to do so with further declines of up to 59 per cent possible in the next 10 years," said the Irena director general Adnan Amin. "These cost reductions, coupled with vast solar potential on the continent, present a huge opportunity for Africa," he said. "It has never been more possible, and less expensive for Africa to realise this potential. " 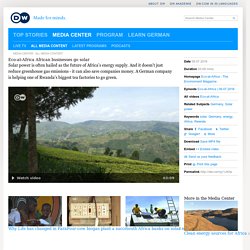 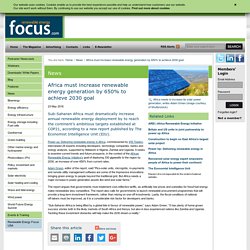 It seeks to examine current trends and future prospects, in the context of the African Renewable Energy Initiative’s goal of deploying 330 gigawatts to the region by 2030, an increase of over 650% from current rates. Adam Green, editor of the report, said:“Pico-solar units, microgrids, m-payments and remote utility management software are some of the impressive innovations bringing green energy to people beyond the traditional grid. IRENA Africa 2030 REmap 2015 low res. Fieldstone Africa launches investment index for renewable energy in Africa. Jun 13, 2016 12:44 CEST by Mariyana Yaneva The Fieldstone Africa Renewables Index (FARI), June 2016, All rights reserved. June 13 (SeeNews) - Financial advisor Fieldstone Africa last week launched an investment index for renewable energy in Africa. The ‘Fieldstone Africa Renewables Index (or FARI) is designed to assist investors, developers and financial institutions in comparing the relative merit of renewable efforts in different countries.

Africa in U.S.$12 Billion Energy Deal As Conservationists Raise Red Flag Over Dams. Photo: The Observer Works are ongoing at the 183MW Isimba dam that the World Bank is worried about over its environmental impact. By Jeff Mbanga Lusaka — Africa was presented with its largest energy deal ever - a $12 billion package from the Africa Development Bank - as some leaders fought off pressure from environmentalists concerned about the threat of an impending construction boom of power dams, reiterating their position that the continent was simply tired of being in the dark. Under the new deal, which was announced during the ADB's annual meeting in Lusaka last week, which ran under the theme Energy and Climate Change, the bank will spend $12 billion over five years. In addition, the bank will leverage at least $40 billion from other private sector players, such as sovereign wealth funds, private equity funds and pension funds, to invest in the energy sector as it tries to meet one of the key components in its High Five development agenda.

Alternative Energy Africa. Africa’s largest hotelier, currently with 116 hotels in 18 countries across the continent, launched a new sustainable development program. Accor announced at its ibis Dakar inauguration ceremony that it would expand objectives in sub-Saharan Africa by launching PLANET 21, a program covering health, nature, carbon, innovation, local development, employment, and dialogue that its hotels are required to meet by 2015. PLANET 21 includes an innovative program that uses an array of educational messages to inform and encourage customers to contribute actively to the hotels’ actions through a few simple gestures.

Dans ce pays confronté aux problèmes de cout et de disponibilité de l'énergie électrique, les installations solaires constitueront une alternative à point nommé face aux groupes électrogènes coûteux. African Union Introduces $20 Billion Renewable Energy Plan. The African Union, an alliance of 54 countries, announced a plan to mobilize $20 billion to develop at least 10 gigawatts of renewable energy on the continent by the end of the decade. The African Renewable Energy Initiative was announced Tuesday at the United Nations climate summit in Paris. It will be hosted by the Abidjan, Ivory Coast-based African Development Bank, which will also act as a trustee, according to Alex Rugamba, director of energy, environment and climate change at the AfDB. The program is expected be partially funded from the $100 billion pledged by rich countries to fight climate change in the developing world.

The promise was made in Copenhagen in 2009 as wealthier countries with distant memories of their industrial revolutions prodded emerging economies to choose green rather than cheap. ACEC brochure 2014 FR. Building an African Clean Energy Corridor.  Africa Clean Energy Corridor: Analysis of Infrastructure for Renewable Power in Eastern and Southern Africa. Africa Urged to 'Go Big' On Solar. Tumbling costs and technological advances mean solar energy could play a major role in an international project to expand electricity access in Sub-Saharan Africa, according to its organiser. "We think there's a tremendous opportunity to go much bigger on solar," Andy Herscowitz, coordinator of Power Africa, told attendees at the initiative's second annual summit, held in the United States on 28-29 January. According to the World Bank, about 600 million Africans have no access to electricity.

Power Africa, launched in 2013 by US President Barack Obama, is a partnership of more than 120 governments, companies, NGOs and academic institutions that seeks to give 60 million homes and businesses access to electricity and add 30,000 megawatts (MW) of power supply by 2030. Another 11,000 to 14,000 MW will come from new projects involving solar, geothermal, wind, hydroelectric and natural gas, as well as a few thousand more megawatts from making existing power supplies more efficient, it says.

Bringing better biodigesters and clean energy to Africa. Sub-Saharan Africa continues to suffer from a major energy deficit, with hundreds of millions of people lacking access to electricity and clean cooking fuels. There is a great need for innovative mechanisms that can help families access clean and affordable energy. The Carbon Initiative for Development (Ci-Dev) is one such mechanism. A $125 million fund with a pipeline of 14 pilot projects in Africa, Ci-Dev will help improve living standards and sustainable energy through results-based finance.