Zambia to be home to Africa's cheapest solar: pv-magazine. 14. 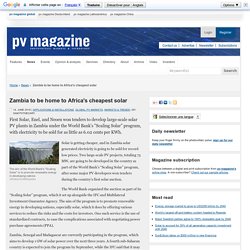 June 2016 | Applications & Installations, Global PV markets, Markets & Trends | By: Sam Pothecary First Solar, Enel, and Neoen won tenders to develop large-scale solar PV plants in Zambia under the World Bank’s "Scaling Solar" program, with electricity to be sold for as little as 6.02 cents per KWh. The aim of the World Bank's "Scaling Solar" is to promote renewable energy in developing nations Ultratomio/Wikipedia Solar is getting cheaper, and in Zambia solar generated electricity is going to be sold for record low prices. The World Bank organized the auction as part of its “Scaling Solar” program, which it set up alongside the IFC and Multilateral Investment Guarantee Agency.

Zambia, Senegal and Madagascar are currently participating in the program, which aims to develop 1 GW of solar power over the next three years. The first tender round in Zambia was organized in just 10 months, and attracted 48 solar power developers, of which seven submitted final proposals. U.S. Easy to grow seeds make excellent fuel source. Zambia National Broadcasting Corporation. Zambia To Construct $190m Bio-Fuel Refinery - President. Zambian President, Edgar Lungu, has on Friday launched the construction of the 190 million-dollar plant. 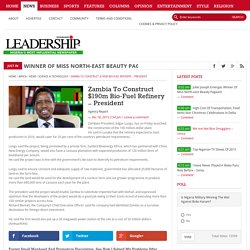 He said in Lusaka that the refinery expected to start production in 2016, would cater for 20 per cent of the country’s petroleum requirements. Lungu said the project, being promoted by a private firm, Sunbird Bioenergy Africa, which has partnered with China New Energy Company, would also have a cassava plantation with expected production of 120 million litres of bioethanol per annum. He said the project was in line with the government’s decision to diversify its petroleum requirements. Lungu said to ensure constant and adequate supply of raw materials, government has allocated 20,000 hectares of land on the farm bloc. He said the land would be used for the development of a nucleus farm and out grower programme to produce more than 600,000 tons of cassava each year for the plant. He said the firm would also put up a 36 megawatt power station at the site at a cost of 50 million dollars.

Zambia's economy in peril as man-made reservoir dries up. LUSAKA: The last time Munandi Siatambika remembers Lake Kariba being this empty was 20 years ago. 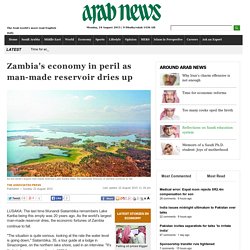 As the world's largest man-made reservoir dries, the economic fortunes of Zambia continue to fall. "The situation is quite serious, looking at the rate the water level is going down," Siatambika, 35, a tour guide at a lodge in Sinazongwe, on the northern lake shore, said in an interview. "It's likely to be even worse than in 1995. "The southern African nation, the second-biggest copper producer on the continent, typically generates almost half of its electricity output from a hydropower plant at Kariba. 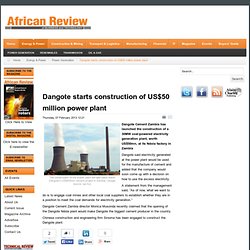 (Image source: sxc.hu)Dangote Cement Zambia has launched the construction of a 30MW coal-powered electricity generation plant, worth US$50mn, at its Ndola factory in Zambia Dangote said electricity generated at the power plant would be used for the manufacture of cement and added that the company would soon come up with a decision on how to use the excess electricity. A statement from the management said, “As of now, what we want to do is to engage coal mines and other local coal suppliers to establish whether they are in a position to meet the coal demands for electricity generation.” 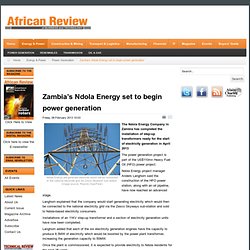 (Image source: Ricardo Diaz/Flickr)The Ndola Energy Company in Zambia has completed the installation of step-up transformers ready for the start of electricity generation in April 2013 The power generation project is part of the US$110mn Heavy Fuel Oil (HFO) power project. Ndola Energy project manager Anders Langhorn said the construction of the HFO power station, along with an oil pipeline, have now reached an advanced stage. Langhorn explained that the company would start generating electricity which would then be connected to the national electricity grid via the Zesco Skyways sub-station and sold to Ndola-based electricity consumers. Installations of an 11KV step-up transformer and a section of electricity generation units have now been completed.

Once the plant is commissioned, it is expected to provide electricity to Ndola residents for the next 25 years. ProfilePDF.ashx (application/pdf Object) Zambia: U.S.$3.8 Million Renewable Energy Plant On the Cards.