The Reppie project is being built at Koshe dump site in Ethiopia. The plant which is the result of a partnership between the Government of Ethiopia and a consortium of international companies, is the first ever waste-to-energy plant in Africa. The consortium include:Cambridge Industries Limited (Singapore), China National Electric Engineering and Ramboll-a Danish engineering firm. United Nations Environment Programme announced on its website that the Reppie project is set to transform the Koshe Dump site and revolutionize the entire city’s approach to dealing with waste.

Ethiopia is set to become the wind capital of Africa. As countries rally around for cleaner, alternative sources of energy to meet their needs as well as their commitments as promised at COP 22 which took place in Paris, France in 2015, there has been an increasing shift to solar power. 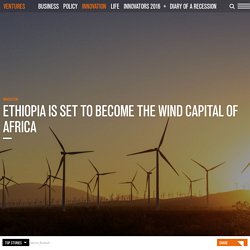 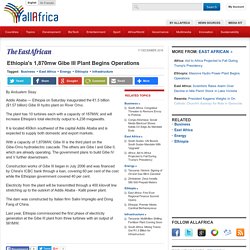 The plant has 10 turbines each with a capacity of 187MW, and will increase Ethiopia's total electricity output to 4,238 megawatts. It is located 450km southwest of the capital Addis Ababa and is expected to supply both domestic and export markets. With a capacity of 1,870MW, Gibe III is the third plant on the Gibe-Omo hydroelectric cascade. The others are Gibe I and Gibe II, which are already operating. Construction works of Gibe III began in July 2006 and was financed by China's ICBC bank through a loan, covering 60 per cent of the cost while the Ethiopian government covered 40 per cent. Ethiopia: Nation Has Potential to Generate Over 10,000 Mw Geothermal Power - Study. By Fanuel Lakew Geothermal power is friendly to the environment and does not displace people during the construction phase though it takes long time and costs huge amount of capital. 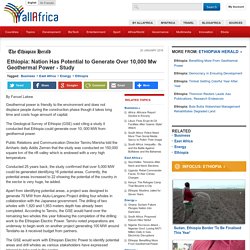 The Geological Survey of Ethiopia (GSE) said citing a study it conducted that Ethiopia could generate over 10, 000 MW from geothermal power. Ethiopia: Benefiting More From Geothermal Power. Editorial About 90 per cent of Ethiopia's energy sector is dominated by traditional biomass fuel such as firewood, agricultural waste and animal dung. 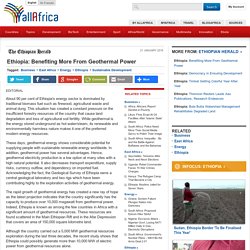 This situation has created a constant pressure on the insufficient forestry resources of the country that cause land degradation and loss of agricultural soil fertility. While geothermal is the energy stored underground as hot water/steam, its renewable and environmentally harmless nature makes it one of the preferred modern energy resources. These days, geothermal energy shows considerable potential for supplying people with sustainable renewable energy worldwide. Ethiopia: Nation Has Potential to Generate Over 10,000 Mw Geothermal Power - Study. 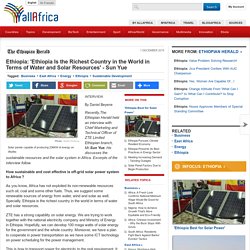 He discusses the sustainable resources and the solar system in Africa. Excerpts of the interview follow. How sustainable and cost effective is off-grid solar power system to Africa ? As you know, Africa has not exploited its non-renewable resources such oil, coal and some other fuels. ZTE has a strong capability on solar energy. Ethiopia’s massive Gilgel Gibe III Dam starts power generation. The grand Gilgel Gibe III dam Photo: viaggietiopia Ethiopia’s Gilgel Gibe III Dam, which is the country’s largest hydropower plant has started power generation following a successful trial production which began in August. 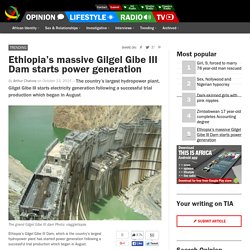 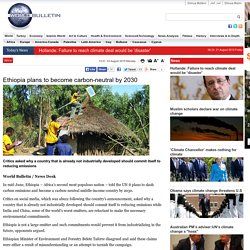 Critics on social media, which was abuzz following the country’s announcement, asked why a country that is already not industrially developed should commit itself to reducing emissions while India and China, some of the world’s worst emitters, are reluctant to make the necessary environmental commitments. Ethiopia is not a large emitter and such commitments would prevent it from industrializing in the future, opponents argued. Ethiopian Minister of Environment and Forestry Belete Taferre disagreed and said these claims were either a result of misunderstanding or an attempt to tarnish the campaign. “The country’s carbon neutral strategy does not in any way conflict with its industrial desires,” he said. 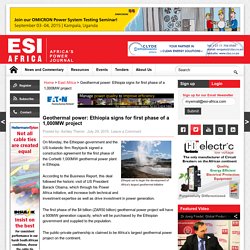 According to the Business Report, this deal followed the historic visit of US President Barack Obama, which through his Power Africa initiative, will increase both technical and investment expertise as well as drive investment in power generation. Ethiopia: Electric Power Signs Groundbreaking Agreement to Buy Geothermal Energy. By Brook Abdu The agreement with Corbetti is the first of its kind letting a private company in the sector Ethiopian Electric Power (EEP) is buying up to 500MW of electric power generated from the Corbetti geothermal source near Hawassa from Corbetti Geothermal Plc. 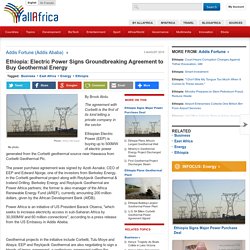 The power purchase agreement was signed by Azeb Asnake, CEO of EEP and Edward Njorge, one of the investors from Berkeley Energy, in the Corbetti geothermal project along with Reykjavik Geothermal & Iceland Drilling. Berkeley Energy and Reykjavik Geothermal are Power Africa partners; the former is also manager of the Africa Renewable Energy Fund (AREF), currently amounting 200 million dollars, given by the African Development Bank (AfDB). Power Africa is an initiative of US President Barack Obama, "which seeks to increase electricity access in sub-Saharan Africa by 30,000MW and 60 million connections", according to a press release from the US Embassy in Addis Abeba. Ethiopia launches its first geothermal well.

Ethiopia has launched its first geothermal well which was drilled and has successfully discharged steam. The project which was part of the Aluto Langano Geothermal Project supported by the Japanese government was started in 2010. Ethiopia’s Water, Irrigation and Energy Minister Alemayehu Tegenu and Japanese Ambassador Kazuhiro Suzuki were present to launch the geothermal well.

According to the Japanese Embassy Press release, the project was launched in 2010 with financial assistance from the Government of Japan and the World Bank, and has been implemented jointly by the Ethiopian Electric Power (EEP), the Geological Survey of Ethiopia (GSE) and Japan International Cooperation System (JICS) and West Japan Engineering Consultants (West JEC). This mega project which was referred to in the Joint Communique of the Japan-Ethiopia bilateral summit meeting, when Prime Minister Shinzo Abe visited Addis Ababa in January 2014. Ethiopia's mountain of waste becomes a new energy source. It is a towering mountain of waste, a 50-year-old dumpsite, in the outskirts of Addis Ababa, locally known as Koshe, an Amharic word meaning “dirty”. However, this heap of waste will be a thing of the past with the construction of the first ever waste to energy plant, a120 million USD deal project signed by the Ethiopian Electric Power Corporation (EEPCo) with Cambridge Industries, a United Kingdom based firm, in January 4, 2013.

This will see Ethiopia develop the first Sub-Saharan Africa Waste-To-Energy facility. The project – known as the Koshe Waste-to-Energy facility - will be able to generate 50 megawatts of clean energy through a controlled combustion process consuming 350,000 tonnes of waste annually. Apart from producing green energy, an additional power source to the national grid, it will also be a solution in reducing the municipal solid waste, beautifying the city and providing meaningful source of income for young people. Greener and cleaner. With sub-Sahara Africa's largest wind farm, Ethiopia makes big push to be green super power.

Ethiopia plans four new wind farm projects    - new Business Ethiopia (nBE) As Ethiopia gears to make wind power one of the significant part of the country’s renewable energy sources, four new wind farm power projects totaling 542 megawats of energy are to be constructed in the coming years, an official said. The report was released in a booklet during the inauguration of the third wind power to be commissioned over the last three years the 153 MW Adama II Wind farm, 95 kms south east of Addis Ababa. The other two are the 51 MW Adama I wind farm and the 120 MW Ashegoda Wind farm located 780 kms north of Addis Ababa. The Projects who are under study are the 300 MW Aysha wind farm, the 42 MW Mesebo-Harena wind farm, the 100 MW Assela Wind Farm and the 100 MW Debre Berhan wind farm. Alemayehu Tegenu Water, Energy and Irrigation Ministry Minister said the inauguration of the Adama II Wind Farm, is part of the government’s drive for the concluding Growth, Transformation Plan (GTP) to increase production capacity from 2,000 MW to 10,000 MW by 2015.

Ethiopia to step up role as regional clean power exporter. A general view of Ethiopia's Grand Renaissance Dam, as it undergoes construction, is seen during a media tour along the river Nile in Benishangul Gumuz Region, Guba Woreda, in Ethiopia March 31, 2015. REUTER/Tiksa Negeri ADDIS ABABA, May 13 (Thomson Reuters Foundation) - Ethiopia plans to begin exporting renewable energy to a broader range of neighbouring nations by 2018 as part of a cross-border effort to meet regional energy demand and limit increases in climate-changing emissions. The Eastern African Power Pool (EAPP) initiative aims to create or expand clean energy transmission lines among about a dozen countries in the region.

Ethiopia, which has plans to dramatically scale up its production and export of hydroelectricity, would take on a bigger role as a regional power exporter under the plan. Ethiopia set to double its hydropower in July. Addis Ababa eyes converting sewage into fuel. A tripartite public-private partnership established among 4R Energy Company, LEM Ethiopia, a non-governmental environment-focused organization, and the Addis Ababa Water and Sewerage Authority (AAWSA) is set to covert the city’s sewage into upgraded biogas. The project signed by the three parties as public private partnership last August, is expected to reduce carbon emission from Addis Ababa‟s sewage wastewater treatment plants. Ethiopia: In Search for Power, Ethiopia Turns to Growing Sugar.

Ethiopian Electric Power Corporation (EEPCo) said here Friday that the wind farm has a power generating capacity of 120MW and will produce about 400 million KWh a year. The Ashegoda project, completed on schedule within 36 months, included the construction of access and maintenance roads for future operations and a new sub-station which interfaces with the EEPCo grid system. Jatropha cultivation underway in 6 Regional States. Cultivation of Jatropah plant, a potential source of biodiesel, is underway in six Regional States, according to the Ministry of Water and Energy (MoWE).Public Relations and Communication Directorate Director with MoWE, Bizuneh Tolcha, told WIC today the cultivation is underway on over 2.5 million hectares of land in Tigray, Amhara, SNNP, Somali and Benishangul Gumuz regions. Some six investors are also developing the plant on 85,208 hectares of land, the director indicated. Ethiopia to get its first PV assembly plant. 18. ProfilePDF.ashx (application/pdf Object)

REVE - Regulación Eólica con Vehículos Eléctricos - AFDB to Invest in Renewable Energy in Ethiopia. The African Development Bank is set to invest 22.6 million US dollars to enhance the renewable energy programs in low income countries including those that are active in Ethiopia. The investment plan was endorsed by the SREP’s sub-committee at a meeting held in Nairobi in March.