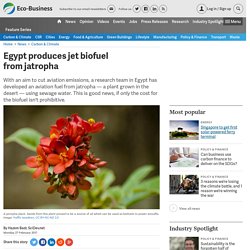 The centre was officially commissioned by the Egyptian Ministry of Civil Aviation to find a local biofuel to power aircrafts. This was to support the implementation of the International Air Transport Association plan, aiming to halve carbon dioxide emissions caused by aviation companies by 2050. Commercial aviation contributes about 2 per cent of global carbon emissions annually. Gizine El Diwani, professor at the centre’s chemical engineering and semi-industrial experiments department, says it all started with the production of a biofuel for cars. The researchers made biodiesel from the seeds of the jatropha tree — the seeds’ oil content is between 20 to 25 per cent. At this stage, the fuel is suitable for car engines. This piece was produced by SciDev.Net’s Middle East & North Africa desk. Egyptians Ingeniously Create Biofuel Using Sewage Water and Desert Trees. Egyptian researchers have invented a biofuel to use for cars, and possibly airplanes, out of a tree that can grow in Egypt’s deserts using sewage water. 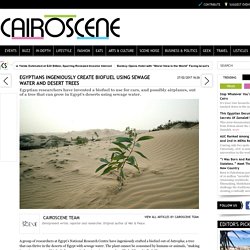 A group of researchers at Egypt’s National Research Centre have ingeniously crafted a biofuel out of Jatropha; a tree that can thrive in the deserts of Egypt with sewage water. The plant cannot be consumed by humans or animals, “making it a unique source of biofuels,” aeronautical engineering researcher, Khaled Fouad tells SciDev. As it stands, the biofuel is fully capable of being used for car engines after the Jatropha’s oil properties are manipulated to mimic those of regular engine oils.

However, in order to be suitable for an airplane engine at high altitudes, it needs to withstand temperatures of at least -45 degrees Celsius without freezing over – a development the research team is working on. 87 groups set for green energy ops in Egypt. A total of 87 investment tie-ups are eligible to work in the renewable energy sector in Egypt, a report said, quoting Mohamed Salah El-Sokbi, head of the New and Renewable Energy Association (NREA). 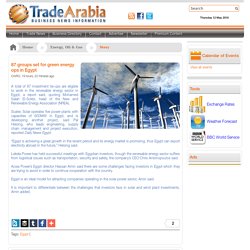 Scatec Solar operates five power plants with capacities of 600MW in Egypt, and is developing another project, said Pal Helsing, who leads engineering, supply chain management and project execution, reported Daily News Egypt. “Egypt is achieving a great growth in the recent period and its energy market is promising, thus Egypt can export electricity abroad in the future,” Helsing said. Lekela Power has held successful meetings with Egyptian investors, though the renewable energy sector suffers from logistical issues such as transportation, security and safety, the company’s CEO Chris Antonopoulos said.

KarmSolar is first Egyptian company to sell solar power off-grid. In a region where the renewable energy market is still small, despite a natural and seemingly perpetual gas shortage, one startup is making big strides. 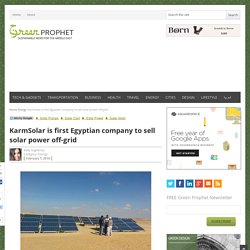 KarmSolar is an Egyptian company dedicated to bolstering solar energy use. It is now the first company in Egypt with official permission to sell solar power off-grid. The Egyptian Electricity Regulatory Agency granted the license in December 2015. After receiving the nod of approval, KarmSolar finalized a 1-megawatt solar energy installation at a dairy farm in Egypt’s west. The company was founded in 2011.

KarmSolar’s company compound is itself in the Western Desert and fully powered from the sun. A great video on the Climate Heroes website shows us KarmSolar in action and features three ambassadors from the company. Solar power provides cost-competitive energy solutions, helps to mitigate climate change, and encourages job creation (KarmSolar started with four people and grew to a team of about thirty.) Egypt set to encourage waste-to-energy systems. Egypt is set to introduce regulations to encourage the production of energy from waste. 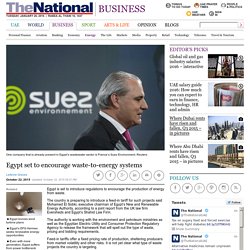 The country is preparing to introduce a feed-in tariff for such projects said Mohamed El Sobki, executive chairman of Egypt’s New and Renewable Energy Authority, according to a joint report from the UK law firm Eversheds and Egypt’s Shahid Law Firm. The authority is working with the environment and petroleum ministries as well as the Egyptian Electric Utility and Consumer Protection Regulatory Agency to release the framework that will spell out the type of waste, pricing and bidding requirements.

Feed-in tariffs offer a fixed pricing rate of production, sheltering producers from market volatility and other risks. It is not yet clear what type of waste projects the country is targeting. Egypt revives wind turbine plans. Egypt has set its sights on becoming a regional manufacturing hub for wind energy despite delays in the country’s renewable energy targets. 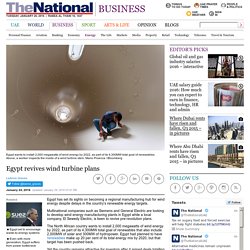 Multinational companies such as Siemens and General Electric are looking to develop wind energy manufacturing plants in Egypt while a local company, El Sewedy Electric, is keen to revive pre-revolution plans. How solar energy is sparking new business in Egypt. An employee is seen on the production line of a solar energy factory on the outskirts of Cairo, Nov. 17, 2011. 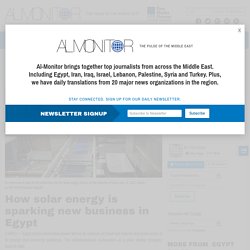 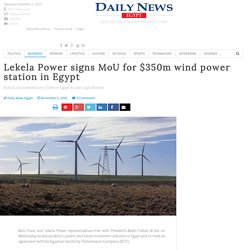 Lekela Power signed a Memorandum of Understanding (MoU) for a $350m wind-power station in Egypt following a meeting with President Al-Sisi, according to a press statement by Actis on Thursday. Lekela Power is 60% owned by Actis, a leading emerging markets investor. The other 40% is owned by Mainstream Renewable Power, a global wind and solar company. Chief Executive Officer of Lekela Power, Chris Antonopoulos, said the new agreement is the third project by Lekela in Egypt. 44 companies obtain tender conditions for 200 MW solar power plant. By Mohamed Farag Forty-four companies have obtained the tender conditions for the establishment of a 200 MW solar power plant in a build-own-operate (BOO) project proposed by the government. 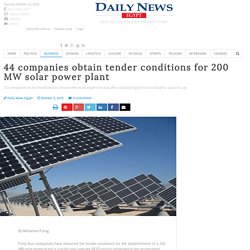 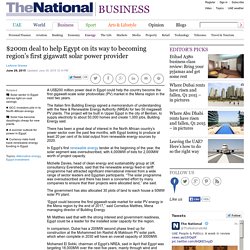 The Italian firm Building Energy signed a memorandum of understanding with the New & Renewable Energy Authority (NREA) for two 50 megawatt PV plants. The project will be built in Upper Egypt in the city of Benban, to supply electricity to about 50,000 homes and create 1,000 jobs, Building Energy said. Egyptian State Company to Present Major Solar Power Project - Chairman. Cairo — A megaproject to generate 100 megawatts of energy using solar power in Upper Egypt's Aswan city will be put forth by a state company, its chairman said on Thursday. The project will involve companies from Egypt and five other countries, Canada, France, China, Germany and the United Arab Emirates, Abdel Aziz Seif el-Din, the chairman of the Arab Organization for Industrialization company said, according to a statement. He added that the company has presented another solar power plant project that would make use of the walls of the company's facility on the Cairo-Suez road. It will have a capacity of 300 megawatts.

Seif el-Din said the foundation of this project will begin after the ongoing Cairo-Suez road expansion is completed. He encouraged all state institutions to use the walls of their buildings to generate electricity. Solar developers flocking to Egypt: pv-magazine. 30. March 2015 | Applications & Installations, Global PV markets, Industry & Suppliers, Markets & Trends, Top News | By: Edgar Meza An increasing number of international developers are investing billions in solar projects in the country, including three Saudi-led projects aiming to construct 5.5 GW of PV capacity across the country.

Concurrently, Terra Sola has increased its capital by more than 35 per cent to reach a paid-up capital of $18.5 million. This latest increase in capital has been sourced primarily from the European market and is a firm endorsement of Terra Sola's unique and profitable business model as well as underscores Bahrain's strength as a regional centre for business and finance. The MoU was signed by Terra Sola chairman David Heimhofer and EEHC chairman Ahmed Moustafa Emam in the presence of dignitaries from the Egyptian government and senior management from Terra Sola and Terra Nex. SkyPower in talks to build Egypt solar plant. SkyPower ...... sees growth prospects for solar projects in Egypt CAIRO, 4 days ago.

Untitled. Egypt to build 4,300 MW solar, wind plants in 3 years: Sisi. Reuters, Abu Dhabi Monday, 19 January 2015. Egypt turns to renewable energy as competitive power generation option. Abu Dhabi (Platts)--20Jan2015/852 am EST/1352 GMT Egypt is rolling out one of the Middle East and North African region's most ambitious renewable energy programs as it seeks to meet surging domestic energy demand while curbing reliance on fossil fuel imports, an official said Tuesday. In the long run, that could help keep electricity costs to consumers in check by helping the Arab world's most populous country avoid mounting bills for relatively costly LNG imports. It is not that the former net oil and gas exporter is shifting course from further development of its hydrocarbon resources, the executive chairman of Egypt's New and Renewable Energy Authority told delegates at the World Future Energy Summit in Abu Dhabi.

Access Infra to invest $400m in Egyptian solar, wind energy stations. Access prequalified for solar, wind projects in Egypt. Egypt: Government Announces Project to Produce Bio-Diesel From Cooking Oil. Cairo — The ministry of supplies and internal trade has concluded its technical research for a project to produce bio-diesel from cooking oil, the minister announced on Tuesday, adding that the project will be enacted "soon".

In a press statement released by the ministry, Supplies Minister Khaled Hanafi said that the project would provide job opportunities for the youth and produce around a million litres of diesel annually. Egypt makes a move on renewable energy - Hydrogen Fuel News  Can Solar Energy Save Egypt From It's Energy Crisis? How Renewable Energy Can Double Egypt's GDP? Egypt Investing Big In Solar Energy, Announces $1 Billion Investment. The new Egyptian government apparently sees solar energy as being a key part of the country’s future, based on recent comments made by its Local and Administrative Development Minister Adel Labib. Energy day in Fayoum (Egypt) Egypt plays catch-up through developing renewable energy. Egypt is joining the global rush toward sources of renewable energy in an effort to manage the country’s growing industrial and household energy needs.

(Alborsa Photo) Egypt’s 1,950 MW Helwan South power station. 12 July 2013 – The planned US$585.4 million Helwan South gas fired power station in Egypt has been approved by the World Bank. ‫بالأخضر / مشاريع الطاقة المتجددة في مصر‬‎ ‫بالأخضر / مشاريع الطاقة المتجددة في مصر 2‬‎ Cargas inks EGP 5m deal to fund conversion of 1,000 vehicles to natural gas. The deal between Cargas and the Social Fund for Development will fund the construction and conversion of 1,000 new vehicles throughout Egypt to supply natural gas(AFP Photo) By Mohamed Adel Tariq Al-Dagwa, president of the Board of Directors of Cargas, and Ghada Wali, secretary general for the Social Fund for Development (SFD), recently signed a EGP 5m agreement stipulating that the former would fund the construction and conversion of 1,000 new vehicles to run on natural gas.

This deal is the sixteenth signed between the SFD and the company. Al-Dagwa said that since its inception, the company has converted over 79,000 vehicles to natural gas, in addition to constructing 71 fueling stations for these vehicles in locations throughout Egypt. He added that the company was able to equip any size of vehicle with the appropriate cylinder, regardless of which type of global conversion set the vehicle operated on. Futek set to open new EGP 20m solar panel factory. Egypt: 6,700 Square Meters Allocated to Generate Power From Wind. Clean electricity from the Egyptian desert - KfW to finance largest wind farm ever built in Africa: Dii - Bringing the Desertec vision into reality. Alternative Energy Africa. Egypt: Electricity Min - New Facilities to Private Sector to Set Up Power Plants. Egypt Adding 750 MW of Wind Projects by 2014. Renewable Energy value proposition-2010.pdf (application/pdf Object)