Clean energy sources increase power-generating capacity in Nigeria. Nigeria: Govt Plans U.S.$50 Billion for Local Biofuels Production. By Michael Eboh The Federal Government, yesterday, said it was working on a policy that would set aside $50 billion to fund and stimulate investment in production of biofuels. 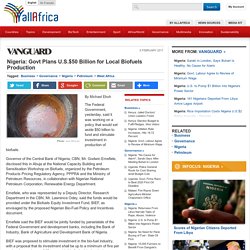 Villages in North East Nigeria rebuild by embracing solar energy. FG directs NNPC to explore alternative energy sources. By Chris Ochayi ABUJA: Worried by incessant attacks on oil installations, especially bursting of gas pipelines by the militants in the Niger Delta, the Federal Government has directed the management of Nigerian National Petroleum Corporation, NNPC, to explore alternative energy sources, with a view to addressing the problems of irregular power supply. 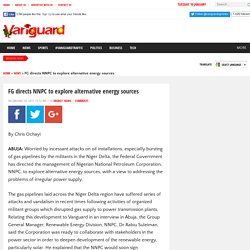 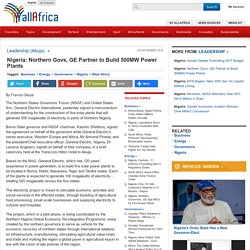 Borno State governor and NSGF chairman, Kashim Shettima, signed the agreement on behalf of the governors while General Electric's senior executive, Western Europe and Africa, Mr Armand Pineda, and the president/Chief executive officer, General Electric, Nigeria, Dr Lazarus Angbazo, signed on behalf of their company, in a brief ceremony held at the Transcorp Hilton Hotel in Abuja. Nigeria: Sokoto to Generate 100MW of Power From Solar. The Sokoto State government on Tuesday said it was determined to multiply its energy sources so as to improve power supply and in turn boost small and medium scale industries in the state. 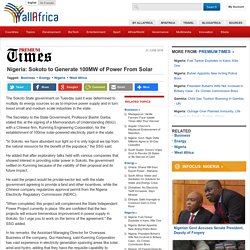 The Secretary to the State Government, Professor Bashir Garba, stated this at the signing of a Memorandum of Understanding (MoU) with a Chinese firm, Kunming Engineering Corporation, for the establishment of 100mw solar-powered electricity plant in the state. "In Sokoto, we have abundant sun light so it is only logical we tap from the natural resource for the benefit of the populace," the SSG said. He added that after exploratory talks held with various companies that showed interest in providing solar power in Sokoto, the government settled on Kunming because of the viability of their proposal and its future impact. Nigeria: Arrow and University of Ilorin to build 500 MW solar plant within six months - Ecofin Agency. Business - Nigeria, 24 Other Countries to Mobilise $1 Trillion Investment in Solar Energy. Business - Ogun Set To Generate Electricity From Sawdust.

Nigeria: Country's Gas-to-Power Suffers As Flaring Hits 702 Million SCFPD. By Sulaimon Salau The nation's gas-to-power supply may still be in the doldrums as the thermal power stations continued to face shortage of feedstock, while the resources are largely wasted away through flaring. 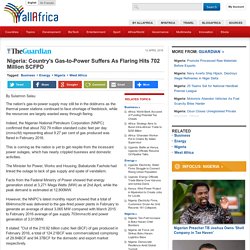 Indeed, the Nigerian National Petroleum Corporation (NNPC) confirmed that about 702.79 million standard cubic feet per day (mmscfd) representing about 9.27 per cent of gas produced was flared in February 2016. This is coming as the nation is yet to get respite from the incessant power outages, which has nearly crippled business and domestic activities. In Nigeria, Small-Scale Solar Plants Are Letting The Sunshine In. Innovative technology links three solar power projects that GE is undertaking in Nigeria for the Tolaram Group. 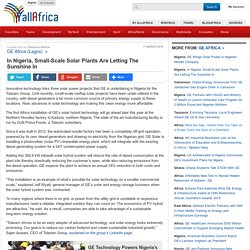 Until recently, small-scale rooftop solar projects have been under-utilised in the country, with diesel generators a far more common source of primary energy supply to these locations. Now, advances in solar technology are making this clean energy more affordable. The first Africa installation of GE’s solar hybrid technology will go ahead later this year at the Northern Noodles factory in Kaduna, northern Nigeria. The state of the art manufacturing facility is run by Dufil Prima Foods, a Tolaram subsidiary. IFC, Alten to build PV solar project in Nigeria. All systems go for Nigeria’s path-finding gas power plant, Azura.

A major independent power plant scheme, billed as the first of its kind, has reached financial close and will now enter construction in electricity-starved Nigeria. 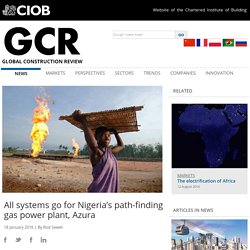 Twenty international banks and equity funders have committed $900m to the Azura-Edo Independent Power Project, a 450MW gas-fired open-cycle power plant to be built in the country’s Edo State. A joint venture of Siemens and Julius Berger Nigeria will start building the plant, which is expected to start generating in 2018. Considered a model for future plants in terms of its private financing, the plant will also burn Nigeria’s natural gas, of which many billions of cubic feet are now routinely flared off as waste.

After four years in development, the scheme reached financial close on 28 December. Nigeria’s moribund power infrastructure is in sore need of rejuvenation. FG to generate $7.5bn from grid solar energy. By Prince Okafor THE Minister of Environment Hajiya Amina Mohammed has projected that the country can generate $7, 5 billion (about N15 trillion) from of grid solar energy. 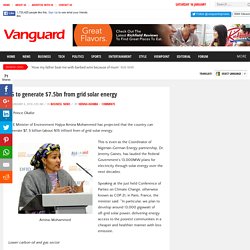 This is even as the Coordinator of Nigerian-German Energy partnership, Dr. Jeremy Gaines, has lauded the Federal Government’s 13,000MW plans for electricity through solar energy over the next decades. Nigeria Mandates 50% Renewable Energy Procurement In Electricity Sector - CPAfrica. In a giant leap for Nigeria’s power sector, the country’s government has enacted landmark regulation to mandate electricity distribution companies to acquire a minimum percentage of electricity from renewable energy sources. 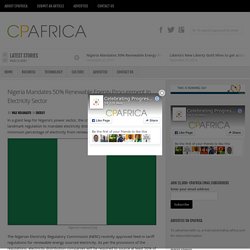 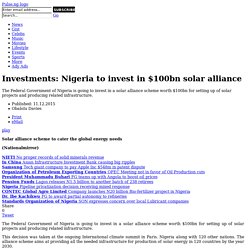 This decision was taken at the ongoing International climate summit in Paris. Nigeria along with 120 other nations. Shiroro to build 300MW solar power plant. Shiroro Hydroelectric Power Station plans to construct a 300 megawatts photovoltaic solar power plant on its existing plant’s premises. The company’s Chief Technical Officer, Roland Lwiindi, said the new facility is an initiative of the new concessionaire, North-South Power Company Limited, since taking over the plant on November 1, 2013. Mr. Lwiindi told the Post Privatisation Monitoring Team of the Bureau of Public Enterprises that visited the power station in Niger State that once approval was obtained from the necessary authorities, its first phase would come on stream in 2017.

When completed, Mr. Lwiindi explained that the new facility, which would be the first of its kind in Africa, would raise the electricity generation capacity to the 900 MW. Nigeria: Total Targets 10 Solar-Powered Filling Stations By December. By Sulaimon Salau TOTAL Nigeria Plc, has expressed its commitment to further improve service delivery to customers, even as it unveiled plans to lunch additional eight solar-powered filling stations to make a total of 10 efficient stations across the country. The oil marketing firm already has one solar-powered station in Ikeja Lagos and Abuja, but Its Managing Director, Mr. Osinbajo to inaugurate solar power grid. Vice President Yemi Osinbajo will inaugurate a 24 KW PV solar-based mini-grid project in Bisanti Village in Niger State. It is the brainchild ofGreen Village Electricity (GVE) Projects Ltd and Community Energy Africa.The inauguration is slated for next Tuesday.

A statement on the project reads: “ In July 2015, GVE Ltd in collaboration with the Bank of Industry (BOI)/ United Nations Development Program (UNDP) and the Institute of Electrical Electronics (IEEE) announced the implementation of a 24kW PV solar based mini-grid pilot project. Solar Is The Solution To Nigeria's Energy Crisis - Werner. Recent studies have showed that Nigeria is not actively participating in the new renewable energy boom enrapturing Africa.

According to 2015 Central Intelligence Agency (CIA) world fact book, Nigeria ranks 68 on the global electricity production chart with an annual production of 25, 700, 000, 000 as at 2010 compared to South Africa which was ranked 16 with a 2012 estimation of 257, 900, 000, 000 kWh. Nigeria, according to the rankings have no meaningful energy generating capacity from renewable sources. Kenya with a population not up to half of Nigeria has about 12.4 percent installed energy generating capacity. Gov. Ishaku Inaugurates 400kw Tunga Dam Hydro Power Plant. Kakara (taraba) — Gov. Darius Ishaku of Taraba on Friday inaugurated the 400 kilowatt Tunga Dam Small Hydro Power Plant that would provide electricity to more than 10, 000 people on the Mambila Plateau. The power plant would also supply electricity to Kakara Highland Tea Factory which currently services more than 56, 000 people including farmers.. The project was executed by the United Nations Industrial Development Organisation (UNIDO), United Nations Commission for Refugee (UNHCR) and the Taraba Government.

Power - Renewables, Additive to Light-Up 100 Million Nigerians. Opinion By Simon Echewofun Sunday Power supply is described as the soul of a business-driven country. Although it is an applause to experience a privatised electricity industry, it is much more impressing if there is sustainable structures of electricity supply that are well enhanced and groomed to meet the rising demand.

According to records obtained from the National Bureau of Statistics (NBS), the country, at present, has over 170 million people with a yearly population increased rate of 3.2percent, translating into about 5.3million annual increase in population. A recent World Bank Report estimated that only 48 percent of Nigerians have access to electricity. 2,500 cars running on natural gas in Benin —Petroleum Minister. Work set to commence on 3, 050mw Mambilla hydro dam — Sambo. The Vice-President, Arc. Namadi Sambo, has disclosed that work will soon commence on the 3,050 megawatts Mambilla Hydro Dam in Taraba State. Sambo Arc. Sambo who spoke in Kaduna State explained that all designs of the major hydro project have been completed and as soon as other logistics are in place, work will resume at the site. Canadian firm to invest US$5 billion on solar projects in Nigeria. Nigeria's first module plant operational. First Ethanol Plant In Africa Debuts In Ogun. World Bank to raise US$100 million for clean energy projects in Nigeria.