The World Could Run Entirely On Wind, Solar, And Hydro Power By 2050. In a few decades, the world could be powered by nothing but wind, water, and sunlight. 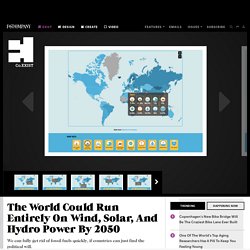 That's the conclusion of a new study released just before world leaders head to Paris to strike a climate deal. "These are basically plans showing it's technically and economically feasible to change the energy infrastructure of all of these different countries," says Mark Z. Jacobson, director of the Atmosphere/Energy Program at Stanford University, who worked with University of California colleagues to analyze energy roadmaps for 139 countries (you can see a few above). The researchers crunched numbers to see how much energy each country would need by 2050—including electricity, transportation, heating and cooling, industry, and agriculture—and then calculated how renewable energy could cover those needs, where it could go, and how much it would cost.

Renewable energy is already cheap and will get cheaper. The study lays out a timeline of how the shift could happen. Lithium_batteries_lca. Lifecycle Analysis Shows Benefits of Renewable Energy. For years, some critics of renewable energy have contended that it's really no better than fossil fuels when you consider the entire lifecycle that goes into making their components. 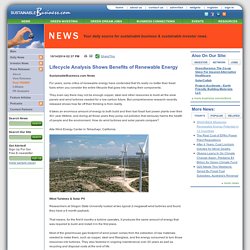 They even say there may not be enough copper, steel and other resources to build all the solar panels and wind turbines needed for a low-carbon future. But comprehensive research recently released shows how far off their thinking is from reality. It takes an enormous amount of energy to both build and then fuel fossil fuel power plants over their 40+ year lifetime, and during all those years they pump out pollution that seriously harms the health of people and the environment. How do wind turbines and solar panels compare? Alta Wind Energy Center in Tehachapi, California: Sorry, Bill Gates, but you are wrong about energy poverty. Bill Gates just blogged on energy poverty. 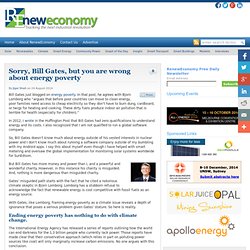 In that post, he agrees with Bjorn Lomborg who “argues that before poor countries can move to clean energy, poor families need access to cheap electricity so they don’t have to burn dung, cardboard, or twigs for heating and cooking. These dirty fuels produce indoor air pollution that is terrible for health (especially for children).” In 2012, I wrote in the Huffington Post that Bill Gates had zero qualifications to understand energy and its costs. I also recognized that I am not qualified to run a global software company. So, Bill Gates doesn’t know much about energy outside of his vested interests in nuclear power and I don’t know much about running a software company outside of my bumbling with my Android apps. But Bill Gates has more money and power than I, and a powerful and wonderful charity. Gates’ misguided path starts with the fact that he cited a notorious climate skeptic in Bjorn Lomborg. Top Solar Power Countries Per Capita & Per GDP (CleanTechnica Exclusive) 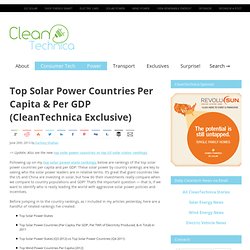 Following up on my top solar power state rankings, below are rankings of the top solar power countries per capita and per GDP. These solar power by country rankings are key to seeing who the solar power leaders are in relative terms. It’s great that giant countries like the US and China are investing in solar, but how do their investments really compare when we compare to country populations and GDP? Before jumping in to the country rankings, as I included in my articles yesterday, here are a handful of related rankings I’ve created: South African team may have solved solar puzzle even Google couldn't crack. It is a problem that has so far stumped even Google’s brainy engineers – how to generate cheap solar electricity using a small-scale array of mirrors to concentrate the sun’s energy. 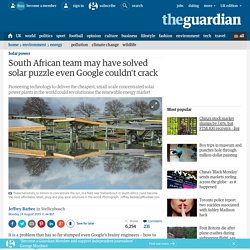 Now a team at a South African university – led by a former Intel strategic planner – believes they have cracked it. Once they have completed a prototype system in October they have big plans for rolling out the technology. The idea behind the design – so-called Concentrated Solar Power or CSP – is simple. A field of mirrors on the ground tracks the sun and concentrates its rays on to a central point which heats up. That heat is converted into electricity. There are a handful of large-scale examples of such solar plants around the world generating electricity, and there are predictions that the technology could generate a quarter of the world’s energy by 2050.

Paul Gauché is the South African founding director of the Solar Thermal Research Group at Stellenbosch University that is testing a new approach.