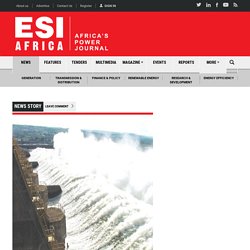 During a tour at the hydropower plant, Mukahadira told local media that the project is now 50% complete and is anticipated to begin generating power by December 2017. The Herald reported that the expansion of the 750MW power station is set to add another 300MW to the national grid. Work at Kariba South power station The project manager further gave a detailed report on the overall completion, which involves on site and off site electrical and civil engineering works that had now reached 48% completion, with a total of 1,200 local and foreign workers involved. Zimbabwe to introduce solar geysers. In southern Africa, the Zimbabwean government seeks to introduce new solar geysers in efforts to reduce electricity consumption. 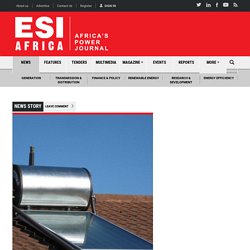 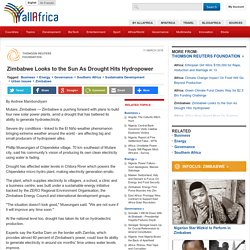 The plant, which supplies electricity to villagers, a school, a clinic and a business centre, was built under a sustainable energy initiative backed by the ZERO Regional Environment Organisation, the Zimbabwe Energy Council and international development groups. "The situation doesn't look good," Muwungani said. Zimbabwe's Biggest Lake Dries Up. Water levels at Lake Mutirikwi, Zimbabwe's biggest inland dam, have drastically declined owing to poor rainfall, making life difficult for people living within the vicinity of the lake. 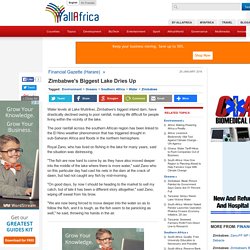 The poor rainfall across the southern African region has been linked to the El Nino weather phenomenon that has triggered drought in sub-Saharan Africa and floods in the northern hemisphere. Royal Zano, who has lived on fishing in the lake for many years, said the situation was distressing. Zimbabwe: Construction of Batoka Hydro to Commence in 2017. CONSTRUCTION of the proposed Batoka Hydro Power Plant, joint project between Zimbabwe and Zambia will commence in 2017 following completion of feasibility studies this year. 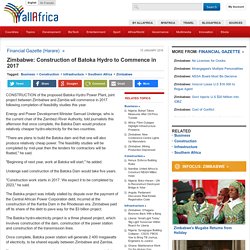 Energy and Power Development Minister Samuel Undenge, who is the current chair of the Zambezi River Authority, told journalists this afternoon that once complete, the Batoka Dam would produce relatively cheaper hydro-electricity for the two countries. "There are plans to build the Batoka dam and that one will also produce relatively cheap power. The feasibility studies will be completed by mid-year then the tenders for contractors will be floated," he said. "Beginning of next year, work at Batoka will start," he added. Zimbabwe Energy Regulatory Authority Licence Five $250M Solar Power Projects - Footprint to Africa. The Zimbabwean Government has commissioned Zimbabwe Energy Regulatory Authority (ZERA) to develop a feed-in tariff policy for solar power projects and other renewable sources. 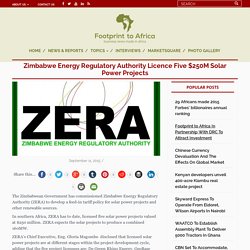 The project had been on the cards for years with its implementation hampered by the shortage of foreign currency among other obstacles. Development of Infrastructure and Utilities is one of the key pillars of Zim-Asset which identifies energy and power development as key enablers to productivity and socio-economic development. Over the years, the power sector has experienced challenges largely due to dilapidated and obsolete generation equipment and infrastructure as well as inadequate financing and capitalisation and other structural bottlenecks. Zim power project. By: Oscar Nkala. 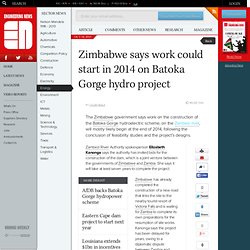 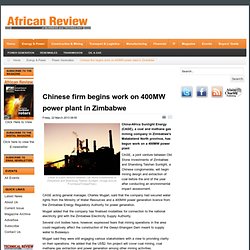 (Image source: FromSandToGlas/Flickr)China-Africa Sunlight Energy (CASE), a coal and methane gas mining company in Zimbabwe's Matabelend North province, has begun work on a 400MW power plant CASE, a joint venture between Old Stone Investments of Zimbabwe and Shandong Taishan Sunlight, a Chinese conglomerate, will begin mining design and extraction of coal before the end of the year after conducting an environmental impact assessment. Zimbabwe Power Company to build US$100 million solar plant. Green Fuel struggling to sell, deploys teams at service stations « Business « ZimEye. Published: March 16, 2012 Harare(ZimEye)-Macdom private limited producers of Green fuel at Chisumbanje ethanol have deployed its marketing teams at service stations in Harare who are persuading motorists to opt for their fuel as the company struggles to dispose of at least 10 million litres of ethanol in stocking . 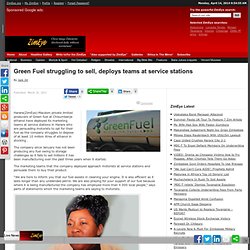 The company since January has not been producing any fuel owing to storage challenges as it fails to sell millions it has been manufacturing over the past three years when it started. The marketing teams that the company deployed approach motorists at service stations and persuade them to buy their product. “We are here to inform you that our fuel assists in cleaning your engine. It is also efficient as it lasts longer than any unblended petrol. Lilian Muungani When it got into the market in January Green fuel was costing US$1.36 per litre, but on Monday the price went up to US$1.40 per litre.

“We are equally surprised by this price hikes.