WITH THANKS TO CHARLOTTE FOR BOOSTING UP THIS SECTION

Remunicipalisation: Putting Water Back into Public Hands. This Changes Everything. Re-municipalization refers to efforts by citizens to reverse the privatization of local services. 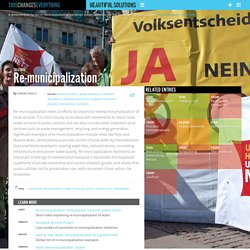 It is most closely associated with movements to return local water services to public control, but can also include other important local services such as waste management, recycling, and energy generation. Significant examples of re-municipalization include cities like Paris and Buenos Aires, where previous private control of local water by transnationals Suez and Veolia resulted in soaring water fees, reduced access, crumbling infrastructure and poorer water quality.

Re-municipalization represents an important challenge to neoliberalism because it repudiates the supposed superiority of private ownership and control of public goods, and shows that public utilities lost to privatization can, with concerted citizen action, be reclaimed. Remunicipalization. Remunicipalisation commonly refers to the return of previously privatised water supply and sanitation services to municipal authorities. 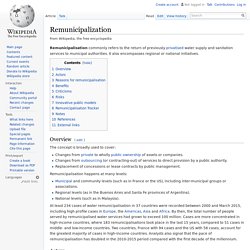 It also encompasses regional or national initiatives. Overview[edit] The concept is broadly used to cover: Changes from private to wholly public ownership of assets or companies.Changes from outsourcing (or contracting-out) of services to direct provision by a public authority.Replacement of concessions or lease contracts by public management. Remunicipalisation happens at many levels: Municipal and community levels (such as in France or the US), including inter-municipal groups or associations.Regional levels (as in the Buenos Aires and Santa Fe provinces of Argentina).National levels (such as in Malaysia). 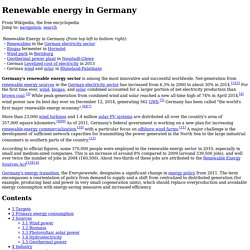 Net-generation from renewable energy sources in the German electricity sector has increased from 6.3% in 2000 to about 30% in 2014.[1][2] For the first time ever, wind, biogas, and solar combined accounted for a larger portion of net electricity production than brown coal.[3] While peak-generation from combined wind and solar reached a new all-time high of 74% in April 2014,[4] wind power saw its best day ever on December 12, 2014, generating 562 GWh.[5] Germany has been called "the world's first major renewable energy economy".[6][7] According to official figures, some 370,000 people were employed in the renewable energy sector in 2010, especially in small and medium-sized companies.

This is an increase of around 8% compared to 2009 (around 339,500 jobs), and well over twice the number of jobs in 2004 (160,500). Targets[edit] Electricity by source in 2014 Primary energy consumption[edit] Germany: Trend toward re-municipalisation of energy sector - EPSU. (November 2011) A little after a decade after the onset of liberalisation and privatisation, the German energy sector is experiencing a return to public and communal ownership. 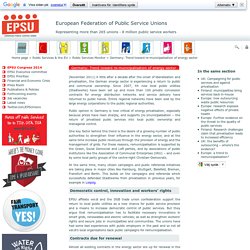 Since 2007, 44 new local public utilities (Stadtwerke) have been set up and more than 100 private concession contracts for energy distribution networks and service delivery have returned to public hands. Entire regional networks have been sold by the large energy corporations to the public regional authorities. Here to stay: Water remunicipalisation as a global trend - Multinationals Observatory. In the last 15 years there have been at least 180 cases of water remunicipalisation in 35 countries, both in the global North and South, including high profile cases in Europe, the Americas, Asia and Africa. 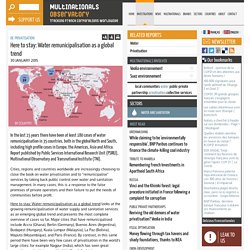 Report published by Public Services International Research Unit (PSIRU), Multinational Observatory and Transnational Institute (TNI). Cities, regions and countries worldwide are increasingly choosing to close the book on water privatisation and to “remunicipalise” services by taking back public control over water and sanitation management. In many cases, this is a response to the false promises of private operators and their failure to put the needs of communities before profit. Here to stay: Water remunicipalisation as a global trend. * The latest version is of 20 January 2015, in which the author corrected a couple of minor errors. 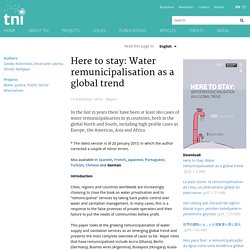 Also available in Spanish, French, Japanese, Portuguese, Turkish, Chinese and German. Introduction Cities, regions and countries worldwide are increasingly choosing to close the book on water privatisation and to “remunicipalise” services by taking back public control over water and sanitation management. In many cases, this is a response to the false promises of private operators and their failure to put the needs of communities before profit. This paper looks at the growing remunicipalisation of water supply and sanitation services as an emerging global trend and presents the most complete overview of cases so far. Despite more than three decades of relentless promotion of privatisation and public-private partnerships (PPPs) by international financial institutions and national governments, it now appears that water remunicipalisation is a policy option that is here to stay.