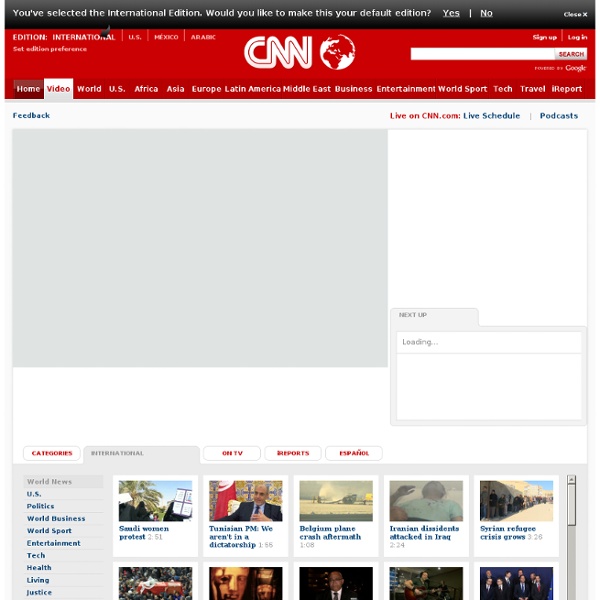 TBStv on USTREAM: TBSテレビの公式チャンネル . Watch without ads Ustream © Search Log in / Sign up With Facebook (faster) ISIS, ISIL or the Islamic State? ISIS is translation of the acronym in Arabic for the Islamic State of Iraq and al-ShamU.S. officials, the U.N., some media use ISIL: Islamic State in Iraq and the LevantJihadist group prefers "the Islamic State" or just "the State" (CNN) -- Is it ISIL, ISIS or Islamic State? Whatever you call the jihadist group known for killing dozens of people at a time, carrying out public executions, beheadings, crucifixions and other brutal acts, there is no denying they have captured the world's attention.

A Simple Guide to All That Teachers Need to Know about Digital Citizenship Digital citizenship is a key component of the technology and media literacy. We should not only teach our students how to be good citizens in the real physical world but how they can be good netizens of the online world as well.Today's learning requires alot of use of technology and most imprtant of all, our students are using technology on a daily basis- text messaging, blogging, Facebooking, Twittering, watching videos, gaming and networking. They live in two different but interconnected worlds. What they do online can have a severe repercussions on their real life if not properly instructed on digital safety issues and this is where digital citizenship fits in. Digital citizenship can be defined as " the norms of appropriate, responsible behaviour with regard to technology use."

List of Revit Keyboard Shortcuts Professional BIM Services My other online profiles Help Ethiopian Kids Label Cloud My Blog List List of Revit Keyboard Shortcuts Sister of 'Lady al Qaeda' sends message to militants Aafia Siddiqui is serving 86-year sentence in a Texas jail for attempted murderThe neuroscientist shot at Americans in Afghanistan in 2008, authorities saidMilitants have named her in potential hostage swap dealsBut her sister says she has no terror links and has been wrongly jailed Karachi, Pakistan (CNN) -- The sister of a Pakistani prisoner described as the "poster girl" for Islamic jihad has urged ISIS hostage-takers to let their captives go. Speaking exclusively to CNN from her home in Karachi, Pakistan, the sister of Dr. Aaifa Siddiqui said the jailed neuroscientist's family wanted "no violence in Aafia's name." "I'm Aafia's sister. We're Aafia's family.

Massive 8.9-magnitude quake hits Japan NEW: "I thought things were coming to an end"NEW: Survivors being plucked from roofs by helicopterNEW: Death toll at 433, at least 784 missing Editor's Note: Read live blogging of the Japan tsunami and earthquake. Are you there? Send your video, pictures to iReport. New York Times: A survivor's retelling of ISIS massacre Your video will begin momentarily. Ali Hussein Kadhim recounts ISIS massacre in New York TimesHe tells Times he survived by feigning deathISIS uses brutality as calling card, often purposely capturing atrocities on video (CNN) -- Ali Hussein Kadhim was not supposed to live to tell his story or that of the hundreds of other Iraqi soldiers and Shiites who were massacred in June by ISIS militants in Tikrit.

Login to your Account Create a free account now your Sparkol account To access your account, please enter your username (registered email address) and password Your username is your email address Enter your password Forgot Password? Model Text: An introduction Welcome to this Revit Zone article on Model Text. In this short tutorial we are going to explain what Model Text is, how and why you would typically use it. In Revit there is fundamentally "two" types of text object.

Muslim Brotherhood leader: Qatar asked us to leave By Ashley Fantz and Salma Abdelaziz, CNN September 14, 2014 -- Updated 2203 GMT (0603 HKT) Leading members of Muslim Brotherhood's political wing say Qatar asked them to moveQatar has not publicly addressed the matter A Muslim Brotherhood member says online that other members will honor the request (CNN) -- Several top members of the Muslim Brotherhood have been asked to leave Qatar, an Egyptian leader of the group said Sunday. The apparent sudden push from Qatar comes amid longstanding pressure against the Brotherhood in the region, which began with its ouster from authority in Egypt several years ago. "We appreciate the great role of the state of Qatar in supporting the Egyptian people in their revolution against the military junta, and well understand the circumstances faced by the region," said Dr.

YokosoNews on USTREAM: YokosoNews is an online social media about travel, lifestyle, study and entertainment in Japan. Watch without ads Ustream © Search