Construction underway for Kenyan biogas plant. A biogas plant will be constructed in Kenya. 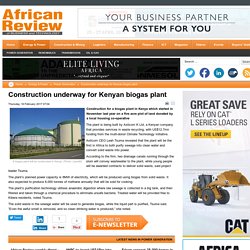 (Photo: LianeM) The plant is being built by Asticom K Ltd, a Kenyan company that provides services in waste recycling, with US$12.7mn funding from the multi-donor Climate Technology Initiative. Asticom CEO Leah Tsuma revealed that the plant will be the first in Africa to both purify sewage into clean water and convert solid waste into power. According to the firm, two drainage canals running through the slum will convey wastewater to the plant, while young people will be awarded contracts to deliver solid waste, said project leader Tsuma. The plant’s planned power capacity is 8MW of electricity, which will be produced using biogas from solid waste. The plant’s purification technology utilises anaerobic digestion where raw sewage is collected in a big tank, and then filtered and taken through a chemical procedure to eliminate unsafe bacteria. Kenyan firm first in Africa to convert plastic waste to synthetic fuel oil - Capital Business. 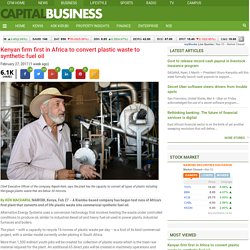 Alternative Energy Systems uses a conversion technology that involves heating the waste under controlled conditions to produce oil, similar to industrial diesel oil and heavy fuel oil used in power plants, industrial furnaces and boilers. The plant – with a capacity to recycle 16 tonnes of plastic waste per day – is a first of its kind commercial project, with a similar model currently under piloting in South Africa.

More than 1,500 indirect youth jobs will be created for collection of plastic waste which is the main raw material required for the plant. An additional 65 direct jobs will be created in machinery operations and performance of administrative duties. “We have begun test runs for the machinery in preparation for official commissioning in early March, 2017. Turkana wind power project set to change face of renewable energy sector in Kenya. Infographic: Impact of Lake Turkana wind farm on the national grid - Capital Business. Solarcentury to build east Africa’s largest battery storage system for solar: pv-magazine. 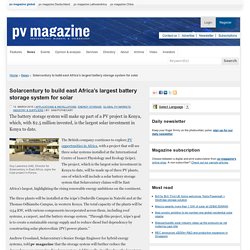 By Justus Wanzala Olkiramatian — This market centre in the arid Lake Magadi region, Kajiado of Southern Kenya is with no grid electricity. 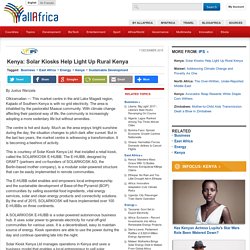 The area is inhabited by the pastoralist Maasai community. With climate change affecting their pastoral way of life, the community is increasingly adopting a more sedentary life but without amenities. The centre is hot and dusty. Much as the area enjoys bright sunshine during the day, the situation changes to pitch dark after sunset. This is courtesy of Solar Kiosk Kenya Ltd. that installed a retail kiosk, called the SOLARKIOSK E-HUBB. The E-HUBB outlet enables and empowers local entrepreneurship and the sustainable development of Base-of-the-Pyramid (BOP) communities by selling essential food ingredients, vital energy services, solar and clean energy products and connectivity solutions.

A SOLARKIOSK E-HUBB is a solar-powered autonomous business hub. Its impact amplifies the link between energy and development. Kenya: With a Solar Oven, Kenyan Women Bake Their Way to a Better Life. Purity Nyamawi and Azanzi Kifwete demonstrate how they bake cakes using a wooden solar box in Msumarini village, Kilifi County, Kenya. 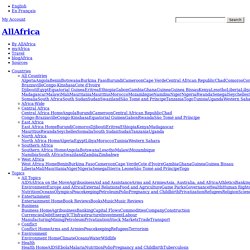 By Leopold Obi Msumarini, Kenya — In this rural village in Kilifi County, on Kenya's east coast, a group of women run a thriving bakery. On a good day, they make dozens of large cakes and over 100 cupcakes. And they don't even have a kitchen oven. Instead, the members of the Imani Women Group bake their cakes using only a wooden box and the sun. Constructed out of timber, leather and foil, the box can bake cakes in about two hours without electricity or charcoal. Kenya: Before Renewable Power Plant Is Completed, Geothermal Overtakes Hydro in Kenya - allAfrica.com. Kenya: Firm Sets Up Africa's Largest Biogas Plant. By Macharia Mwangi A Sh765 million biogas plant being set up in Naivasha will generate 2.2 megawatts of power when in operation. 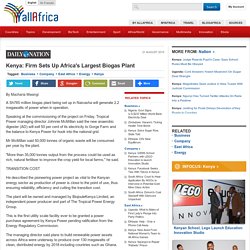 Speaking at the commissioning of the project on Friday, Tropical Power managing director Johnnie McMillan said the new anaerobic digester (AD) will sell 50 per cent of its electricity to Gorge Farm and the balance to Kenya Power for hook into the national grid. Mr McMillan said 50,000 tonnes of organic waste will be consumed per year by the plant. Kenya’s hydropower generation goes up as dams fill up. BY Dominic Omondi and Frankline Sunday Updated Thursday, June 4th 2015 at 00:00 GMT +3 NAIROBI: KenGen says it's looking to stabilize electricity bills with the increased generation from hydro power. 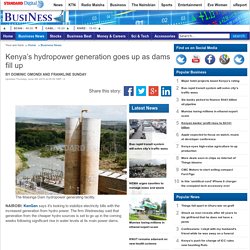 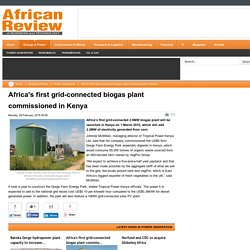 (RollsRoycePowerSystemsAG/Flickr) Johnnie McMillan, managing director of Tropical Power Kenya Ltd, said that his company commissioned the US$6.5mn Gorge Farm Energy Park anaerobic digester in Kenya, which would consume 50,000 tonnes of organic waste sourced from an 800-hectare farm owned by VegPro Group. “We expect to achieve a five-and-a-half year payback and that has been made possible by the aggregate tariff of what we sell to the grid, the locals around here and VegPro, which is East Africa’s biggest exporter of fresh vegetables to the UK,” said McMillan. Geothermal power overtakes hydro to become the leading source of energy in Kenya. Kenya taps into geothermal energy. Business - Final phase of 280MW Olkaria power plant nears completion. The amount of geothermal energy that is pumped into the national grid will change significantly in the coming month. 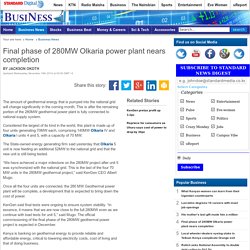 This is after the remaining portion of the 280MW geothermal power plant is fully connected to national supply system. Considered the largest of its kind in the world, this plant is made up of four units generating 70MW each, comprising 140MW Olkaria IV and Olkaria I units 4 and 5, with a capacity of 70 MW. The State-owned energy generating firm said yesterday that Olkaria 5 unit is now feeding an additional 52MW to the national grid and that the new unit is still being tested.

IPPs to build new steam plants. Three companies will spend a total of $300 million (Sh26.8 billion) to build geothermal power plants in Kenya that would provide an additional 105 megawatts of capacity by December 2015, a senior official said on Friday. 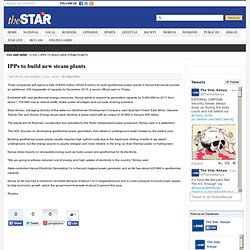 These investments that we are making will go a long way towards empowering our people and combat social ills that have inflicted this country over the years,” President Kenyatta said. “If there is a procurement problem, let us deal with the procurement problem, as a procurement problem. Alternative Energy Africa. Kenya progresses along nuclear energy path. The Kenya Nuclear Electricity Board (KNEB) is looking for a consultant to undertake a technical evaluation, which would include an analysis of the electric grid requirements to support proposed nuclear power plants. “The proposed grid system study will build on the studies already carried out but with a specific emphasis on the nuclear power plants and is expected to take 12 months,” KNEB says.

The board also expects the consultant to develop plans to improve the current grid, including having a reserve capacity on the grid to support the use of nuclear power plants. KNEB has also set requirements for the consultant to have a team composed of both local and foreign experts for the study. KNEB expects nuclear electricity to play a critical part in meeting power demand, which has been projected to hit 15,000 MW over the next 16 years, from the current 1,400 MW.

Previous estimates have put the cost of setting up a 1,000 MW nuclear plant at US$3.5 billion. Kenyan shift to Green Economy would generate USD 45bn by 2030. By BiztechAfrica - April 17, 2014, 8:03 a.m. Image: By BiztechAfrica By Semaj Itosno, Nairobi, Kenya Kenya’s transition to a green economy could produce major economic benefits equivalent to an estimated USD 45 billion by 2030, a new study shows.

Construction Begins on $7 Billion Power Africa Project. This spring, construction is set to begin on the first projects coordinated through Power Africa, a multibillion-dollar Obama administration initiative that seeks to double access to electricity in sub-Saharan Africa within five years, and in some cases accelerate reforms in the governments of the nations involved.

Chinese companies come together to build Kenyan solar power plant. Analysts speculate that the cost for building the solar power plant may go up to multi-billion dollars. ProfilePDF.ashx (application/pdf Object)