Africa's first waste to gas plant opens in Cape Town. South Africa: Renewables Will Also Cost SA Over R1 Trillion - Joemat-Pettersson. Renewable energy will also cost South Africa in excess of R1trn and it's up to Eskom to say if they can afford it, as it will be funded from the power utility's balance sheet, said Energy Minister Tina Joemat-Pettersson on Tuesday. 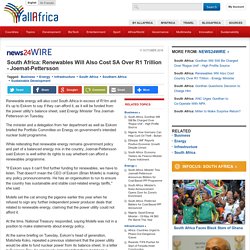 The minister and a delegation from her department as well as Eskom briefed the Portfolio Committee on Energy on government's intended nuclear build programme. While reiterating that renewable energy remains government policy and part of a balanced energy mix in the country, Joemat-Pettersson said Eskom is well within its rights to say whetherit can afford a renewables programme. "If Eskom says it can't find further funding for renewables, we have to listen.

That doesn't mean the CEO of Eskom (Brian Molefe) is making any policy pronouncements. He has an organisation to run to ensure the country has sustainable and stable cost-related energy tariffs," she said. Source: Fin24. S.Africa basks in continent’s first solar-powered airport. An aircraft parks on the runway of George Airport, South Africa. 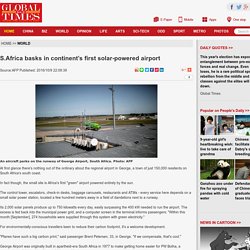 Photo: AFP. More and more South Africans are switching over to solar energy. SolarReserve in Africa. Ingula Unit 4 kicks into action after decade in construction. On Monday, South African state-owned power utility, Eskom, announced that Unit 4 at its Ingula pumped storage power station was handed over for commercial operation on Friday, 10 June 2016. 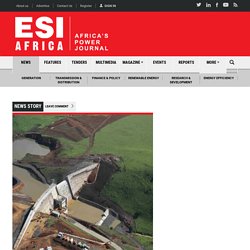 The grid has since secured an additional 333MW of generated power since the weekend. This is the first of four units to commercially support the national grid ahead of schedule, powering South Africa into the future, the utility said in a company statement. The company added that Unit 4 was synchronised to the national grid on 25 March 2016 and has been undergoing optimisation whilst supporting the grid. Abram Masango, Eskom’s Group Executive for Group Capital said: “This moment in time is the culmination of many years and countless hours of work, and that are immensely proud and conscious of the significance of this Ingula team’s achievement.

Ingula in development for a decade "Rotating at 428 revolutions per minute, each unit will produce 333MW, a total for the station of 1,332MW. SA is leading Africa’s clean revolution. South Africa is Africa’s clean energy frontrunner. 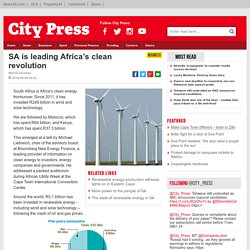 Since 2011, it has invested R249 billion in wind and solar technology. We are followed by Morocco, which has spent R64 billion, and Kenya, which has spent R37.3 billion. This emerged at a talk by Michael Liebreich, chair of the advisory board at Bloomberg New Energy Finance, a leading provider of information on clean energy to investors, energy companies and governments. He addressed a packed auditorium during African Utility Week at the Cape Town International Convention Centre. Around the world, R5.1 trillion has been invested in renewable energy – including wind and solar technology – following the crash of oil and gas prices. He started the talk by quoting business mogul Bill Gates, who said in November last year that “we need an energy miracle”. 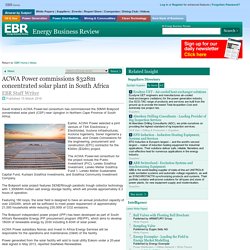 The Bokpoort solar project features SENERtrough parabolic trough collector technology with 1,300MWh molten salt energy storage facility, which will provide approximately 9.3 hours of operation. BMW will use manure to power South Africa plant. The German carmaker’s factory in South Africa will get up to 30 per cent power from waste. — Reuters picPRETORIA, Oct 17 — BMW AG’s car-assembly plant in South Africa is doing its bit to help the German carmaker edge toward a global target to supply all its production with renewable energy: It’s getting some of its power from cow manure. 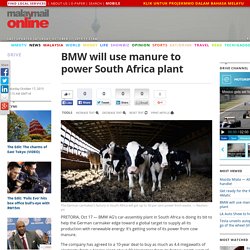 The company has agreed to a 10-year deal to buy as much as 4.4 megawatts of electricity from a biogas plant about 80 kilometres from its factory north-west of Pretoria, the South African capital. Surrounded by land where about 30,000 cattle graze, the operation runs off gas emitted by a fetid mixture of dung and organic waste ranging from sour yogurt to discarded dog food. South Africa: Natural Gas Power Plant to Boost South Africa's Energy Security. A liquid natural gas (LNG) power plant is being planned for Port Elizabeth that is expected to be South Africa's most efficient and safest energy capacity expansion. 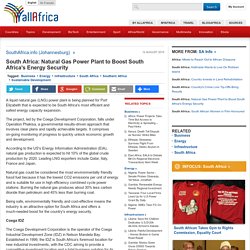 The project, led by the Coega Development Corporation, falls under Operation Phakisa, a governmental results-driven approach that involves clear plans and rapidly achievable targets. It comprises on-going monitoring of progress to quickly unlock economic growth and development. According to the US's Energy Information Administration (EIA), natural gas production is expected to hit 10% of the global crude production by 2020. Leading LNG exporters include Qatar, Italy, France and Japan. Alternative Energy Africa. Release Delegates on day one of the South African Wind Energy Association heard that wind energy is now set to make a contribution of more than ZAR 7 Billion to communities and socio-economic development over the next 20 years in South Africa. 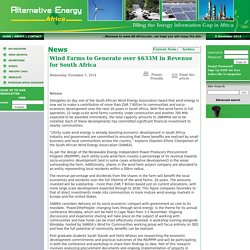 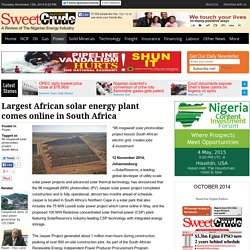 Map of solar in South Africa reveals key development trends. A map showing all of the photovoltaic projects awarded under the government REIPPPP program in South Africa has been revealed. 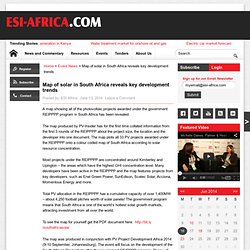 The map produced by PV-Insider has for the first time collated information from the first 3 rounds of the REIPPPP about the project size, the location and the developer into one document. The map plots all 33 PV projects awarded under the REIPPPP onto a colour coded map of South Africa according to solar resource concentration. Most projects under the REIPPPP are concentrated around Kimberley and Upington – the areas which have the highest GHI concentration level. Many developers have been active in the REIPPPP and the map features projects from key developers, such as Enel Green Power, SunEdison, Scatec Solar, Acciona, Momentous Energy and more.

Total PV allocation in the REIPPPP has a cumulative capacity of over 1,400MW – about 4,250 football pitches worth of solar panels! To see the map for yourself get the PDF document here: About PV Insider. Abengoa’s two SA CSP plants 80% complete, with a third on the way. Two 75 MW PV projects come on stream in SA. South Africa Is Primed for Major Solar Development.

Johannesburg, South Africa -- South Africa enjoys some of the best sunshine in the world all year round and its electricity is among the most expensive on the planet. The country’s lofty solar ambitions therefore come as little surprise: Forty-two percent of South Africa’s newly-installed energy capacity should be renewable by 2030. Its solar power generation is expected to reach 1,050 MW by 2015 in contrast with just 25 MW in 2012. The country is also expected to have installed over four million solar panels and have the capacity to set up 1.6 million more by the same date. Sorghum biofuel program set for kick-off in South Africa. Last Updated: Thursday, 24 April 2014 | 15:28 GMT Mabele Fuels is ready to proceed with the biofuel program, after the South African government shows potential to subsidise investment. Man with leaf gas nozzle. PHOTO: Getty images The South African Minister of Energy Ben Martins reported that the final biofuels position paper will be published in May 2014.

SA solar industry starting to mature. By: Natasha Odendaal South Africa’s solar photovoltaic (PV) energy industry has started to mature as costs come down and capacity rises. As the nation moves ahead with many of its solar ambitions, the National Treasury said on Tuesday that the Department of Energy’s Renewable Energy Independent Power Producer Procurement Programme (REIPPPP) had been oversubscribed significantly following the latest bid, with total project prices falling dramatically. Speaking at the Solarplaza conference, in Sandton, National Treasury law director Lena Mangondo said the third round of the REIPPPP attracted over 60 potential solar PV project developers, offering a collective capacity of 3 604 MW. Six renewable-energy developers were appointed as preferred bidders with a collective installed capacity of 435 MW and total project costs falling to R8.1-billion. The first round of bidding attracted 28 bidders, with 18 solar PV players selected to deliver 632 MW installed capacity.

Alternative Energy Africa. As South Africa continues to surge in renewable energy ventures, in part thanks to its Renewable Energy Independent Power Producers Program (REIPPP), there is still one area that it has yet to conquer: waste-to-energy (W2E). South Africa’s Department of Environmental Affairs stated that the country generates around 60-70 million cubic meters of waste annually – which indicates a huge potential for the W2E sector.

However, South Africa is fairly new to the game only implementing its first W2E project in 2007. One project that is making headway is the SLR South African Waste Project which uses two landfill sites to make energy, adding 6.5 MW into the local grid powering 40,000 homes. Companies like Sasol, MTN, and ABSA are transforming a wide range of waste into “syngas” which can be used in gas engines to generate cleaner transportation fuels like diesel and jet fuel. One company supplying the technology for such projects is GE with its Jenbacher model. South Africa turning greener. South Africa’s energy fortunes from 2010 to 2030, renewables included, are in the care of the Integrated Resources Programme 2010. The plan forecasts the country’s electricity demand for the next 20 years, and determines how this demand is to be met.

Soon Donauer Solartechnik, one of Europe's largest manufacturers of solar energy systems, in cooperation with a German project developer and a South African installation company, will commission a photovoltaic (PV) plant on the roof of the University of the Witwatersrand, the Environmental Expert portal reports. The plant will deliver an annual yield of around 2,800 kilowatt hours as part of a project to provide environmentally friendly electricity for two educational institutions on location.

The first Donauer solar plant, located in the Mafa Max Motloung Secondary School in Delmas, was connected to the grid late last year and its expected annual yield is approximately 3,000 kilowatt hours. 50 MW SA solar project part of Saudi group’s diversification drive. By: Terence Creamer Saudi Arabian power and water group ACWA Power International has confirmed that the 50 MW Bokpoort concentrated solar power (CSP) project, which is proposed for the Northern Cape, will be its first investment in Africa.

The development, which has an estimated project cost of R4.5-billion, was selected along with 18 other preferred bids during the second-window evaluation under government’s Renewable Energy Independent Power Producer Programme (REIPPP), which took place between March 5 and May 21.