Spain Signs Agreement To Exchange Renewable Electricity Between Internal European Market And Morocco – Eurasia Review. Spain’s Minister for Energy, Tourism and the Digital Agenda, Álvaro Nadal, signed an agreement in Marrakesh with representatives from Morocco, Portugal, France and Germany to facilitate the exchange of electricity from renewable sources between Morocco and the Internal European Market by means of a gradual integration of electricity markets by the two parties. 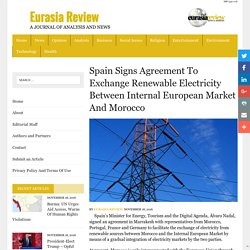 At present, Morocco is only interconnected with the European Union through Spain and there is also a need to complete the internal energy market so as to eliminate obstacles preventing a greater exchange of electricity. The declaration includes creating a roadmap that will analyze the legal, technical, economic and environmental issues, etc., as well as the bottlenecks that currently limit the exchange of electricity between the two parties. Conférence de lancement de l'initiative ethiCarbon Afrique, introduction par Stéphane Pouffary. Alternative Energy Africa. The EU plans to construct at least one modern hydropower plant in Liberia’s Gbarpolu County. 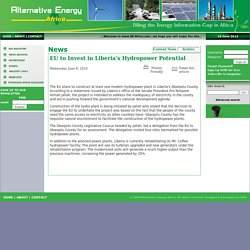 According to a statement issued by Liberia’s office of the Senate President Pro-Tempore Armah Jallah, the project is intended to address the inadequacy of electricity in the county and aid in pushing forward the government’s national development agenda. Construction of the hydro plant is being initiated by Jallah who stated that the decision to engage the EU to undertake the project was based on the fact that the people of the county need the same access to electricity as other counties have. Gbarpolu County has the requisite natural environment to facilitate the construction of the hydropower plants.

Italy’s Salini Impregilo to build US$2.8bn dam in Ethiopia. The proposed hydroelectric plant will have an annual power generation capacity of 6,460GWh. 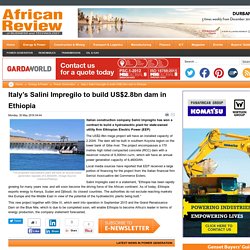 (Image Source: russmac/Pixabay) The US$2.8bn mega project will have an installed capacity of 2.2GW. The dam will be built in southern Koysha region on the lower bank of Gibe river. The project encompasses a 170 metres high rolled compacted concrete (RCC) dam with a reservoir volume of 6,000mn cu/m, which will have an annual power generation capacity of 6,460GWh. Local media sources have reported that EEP received a large portion of financing for the project from the Italian financial firm Servizi Assicuative del Commerce Estero. Turkey to build dams in Mauritania and Senegal. The Forestry and Water Affairs Ministry has vowed to "share its experiences and opportunities" in all areas to contribute to Africa's development on the basis of a win-win principle. 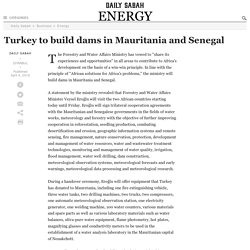 In line with the principle of "African solutions for Africa's problems," the ministry will build dams in Mauritania and Senegal. A statement by the ministry revealed that Forestry and Water Affairs Minister Veysel Eroğlu will visit the two African countries starting today until Friday. As part of its endeavors to develop bilateral relations with African countries since 2002, Turkey declared 2015 as "The Year of Africa. " Within the framework of a policy called "The African Initiative," Turkey and Africa has made significant progress in terms of cooperation in the fields of education, culture, economy, construction, transportation and infrastructure. French company to set up wind farm in Sperrgebiet. Paris- French company InnoVent is planning to set up a 150 to 500 megawatt (MW) wind farm in the Sperrgebiet National Park. 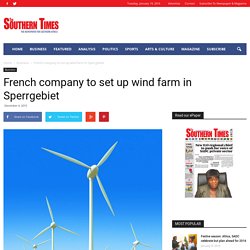 The Sperrgebiet is a diamond mining area in south-western Namibia, north of Lüderitz. InnoVent subsidiary InnoSun and the Ministry of Environment and Tourism (MET) to sign a Memorandum of Understanding (MOU) at a side event during the climate change conference in France. The 21st session of the Conference of the Parties (COP 21) of the United Nations Framework Convention on Climate Change (UNFCCC) commenced last week.

Speaking to Nampa about this development last week, the MET Environment Commissioner Theofilus Nghitila commended the move, saying it is a signal to the world that Namibia has the potential for renewable energy. Africa: France, Germany to Fund Renewables in Africa. Gulf Construction Online - SkyPower to build $440m solar plant in Djibouti. SkyPower ... in key Africa renewable energy push. 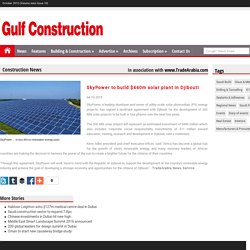 SkyPower, a leading developer and owner of utility-scale solar photovoltaic (PV) energy projects, has signed a landmark agreement with Djibouti for the development of 200 MW solar projects to be built in four phases over the next four years. The 200 MW solar project will represent an estimated investment of $440 million which also includes corporate social responsibility investments of $11 million toward education, training, research and development in Djibouti, said a statement. 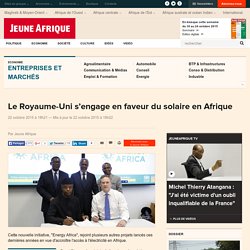 Italian Renewable Energy Company to Invest In MoroccoMorocco World News. UK government backs African 'solar energy revolution' - 30 Sep 2015. The UK government has vowed to play a leading role in delivering a "solar revolution" across Africa, arguing the technology has the potential to transform energy access across the continent. 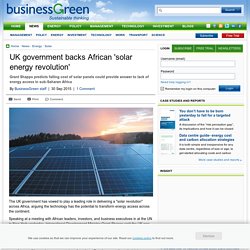 Speaking at a meeting with African leaders, investors, and business executives in at the UN in New York yesterday, International Development Minister Grant Shapps said the UK was keen to push the development of Africa's nascent solar market up the political agenda. Ex-French minister aims to launch $3 bln renewables fund for Africa. Namibia: Germany, Namibia to Partner On Renewable Energy - allAfrica.com. The German government is willing to support Namibia in producing renewable energy in order to tackle the looming energy crisis in the country.This was said by the German ambassador to Namibia, Christian Matthias Schlaga in Swakopmund this week when he revealed that this support could be in the form of finance, experts and training. 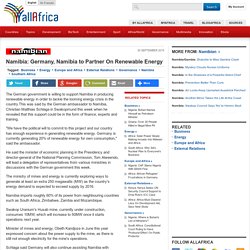 "We have the political will to commit to this project and our country has enough experience in generating renewable energy. Germany is currently generating 20% of renewable energy for own consumption," said the ambassador. He said the minister of economic planning in the Presidency and director-general of the National Planning Commission, Tom Alweendo, will lead a delegation of representatives from various ministries in discussions with the German government this week. Yingli and Namene Form JV for Africa-based Solar Projects - September 4, 2015. An Yingli Green Energy Holding Co. 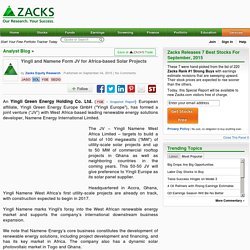 Ltd. (YGE - Snapshot Report) European affiliate, Yingli Green Energy Europe GmbH ("Yingli Europe"), has formed a joint venture (“JV”) with West Africa-based leading renewable energy solutions developer, Namene Energy International Limited. Cyprus Gas to be pumped in Egypt by the second half of 2015. CAIRO: Bilateral talks between Egypt and Cyprus have focused on the common project to develop the Cypriot Aphrodite field, on the side lines of a tripartite summit with Egypt, Greece and Cyprus.

Technical and economic studies for the project are to finish by the second half of 2015 to start pumping, said Sherif Ismail, Minister of Petroleum and Mineral Resources, Youm7 reported. Taylor Swift - Blank Space. Turkey to invest in Ethiopia's hydropower. MENA : Algeria, Libya and Egypt to replace Gazprom. Plans are underway for Algeria, Libya and Egypt to replace 50% of Russia’s Gazprom natural gas supply to Europe.

Italy’s largest utility, Enel SpA, hopes that the development efforts that are ongoing in oil and gas sectors of these North African countries, especially in Algeria, will ease the process. Europe is seeking to reduce its dependence on Russian gas after the country’s conflicts with Ukraine cut transit to Europe in 2006 and 2009. According to data collected from the OAO Gazprom data show, Russia supplied Europe and Turkey with almost 162 billion cubic meters; making it the continent’s biggest supplier.

Marco Arcelli, the executive vice president of Enel’s upstream gas division believes that that amount could be exported from the North African countries. He stated that Algeria can ship 60 billion cubic meters of gas to Europe per annum, while Libya and Egypt can provide 10 billion respectively. Swiss company to build 16 solar energy plants in southern Morocco. Rabat – The Swiss group Sola Terra specializing in Solar Energy is reportedly planning to set up 16 photovoltaic plants with a capacity of 25 megawatts in Southern Morocco.

The 16 plants will be built each under contracts already signed with the Moroccan government. Seven sites have already been identified to accommodate Sola Terra facilities mainly in Ourzazate, Ain Bni Mathar, Foum Al Oued, Boujdour, and Sebkat Tah. Sola Terra will soon launch the construction and aims through its forthcoming listing on the Berlin Stock Exchange for a contribution of 50 million euros. Cheap African solar energy could power UK homes in 2018. 20 October 2014Last updated at 02:33 ET By Matt McGrath Environment correspondent, BBC News An impression of what a large-scale concentrated solar power facility might look like in the Tunisian desert Investors are seeking funding from the UK government for an ambitious plan to import solar energy generated in North Africa. Under the scheme, up to 2.5 million UK homes could be powered by Tunisian sunshine by 2018.