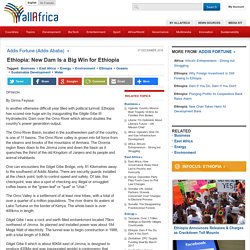 The Omo River Basin, located in the southwestern part of the country, is one of 11 basins. The Omo River valley is grown into full force from the steams and brooks of the mountains of Amhara. The Oromia region flows down to the Jimma zone and down the basin as it quenches the thirst of the old Kingdom of Janjero and its people and animal inhabitants. One can encounters the Gilgel Gibe Bridge, only 81 Kilometres away to the southwest of Addis Abeba. China completes rehabilitation of plant, hands over to Ethiopia. Chinese bank fund construction of dam in Angola. December 1st, 2016 Home Angola, China The Industrial and Commercial Bank of China (ICBC) has granted a loan of US$4.5 billion to Angola to finance the construction of the Caculo Cabaça hydroelectric dam, under a contract signed on Wednesday in Beijing, the Angolan press reported. 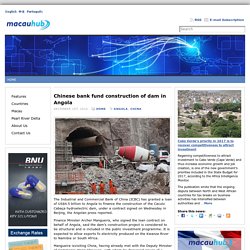 Finance Minister Archer Mangueira, who signed the loan contract on behalf of Angola, said the dam’s construction project is considered to be structural and is included in the public investment programme. It is expected to allow exports fo electricity produced on the Kwanza River to Namibia or South Africa. Mangueira isvisiting China, having already met with the Deputy Minister of Commerce Wang Shouwen, with whom he discussed issues of a bilateral nature and the need to speed up the approval process of projects included in Angola’s development plan that has a credit line from China.

Related News: China holds key to Africa's renewable energy. NAIROBI — An environment expert has said Chinese know-how in renewable energy development could help generate clean and sustainable power in Africa, which is home to almost half the global population lacking access to electricity. 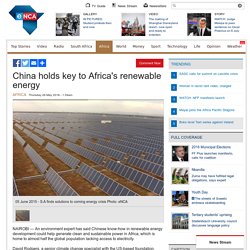 David Rodgers, a senior climate change specialist with the US-based foundation, Global Environment Facility, said China had made wind and solar power technologies, which used to be seen as luxuries, become affordable to the world. “China’s approach of doing things in a big way has made the country become the leader in the world by availing affordable energy to the populations,” Rodgers said on Wednesday at the United Nations Environment Assembly in the Kenyan capital, Nairobi. China is the world’s largest investor in renewables excluding large hydro, with its $102.9 billion in investment in 2015 representing more than one third of the global total, according to a report issued by the United Nations Environment Programme (UNEP) in late March. Africa News Agency. Maroc- Un parc éolien, à capitaux entièrement privés, va voir le jour à Khalladi. 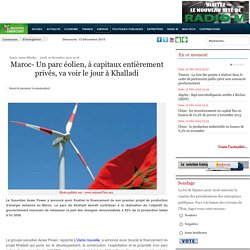 Zimbabwe: China to Fund Power Project. By Tendai Mugabe China will this year fund a power generation project in Hwange to the tune of $1,2 billion as part of operationalising the multi-billion dollar projects signed between Harare and Beijing last year, outgoing Chinese ambassador Mr Lin Lin has said. 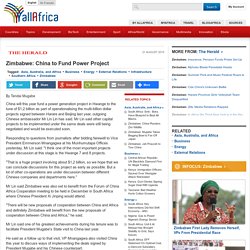 Mr Lin said other capital projects to be implemented under the same deals were still being negotiated and would be executed soon. Responding to questions from journalists after bidding farewell to Vice President Emmerson Mnangagwa at his Munhumutapa Offices yesterday, Mr Lin said: "I think one of the most important projects under discussion at this stage is the Hwange 7 and 8 projects.

"That is a huge project involving about $1,2 billion, so we hope that we can conclude discussions for this project as early as possible. But a lot of other co-operations are under discussion between different Chinese companies and departments here. " Kenya and China launch solar technology transfer and training institute. Technicians feel that learning about solar light technology and installation can take them a long way in the clean energy revolution in Kenya. 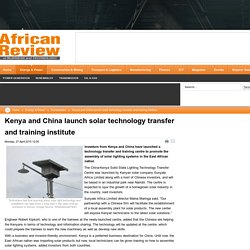 (Image source: KhlasulAmal/Flickr) The China-Kenya Solid State Lighting Technology Transfer Centre was launched by Kenyan solar company Sunyale Africa Limited along with a host of Chinese investors, and will be based in an industrial park near Nairobi. The centre is expected to spur the growth of a homegrown solar industry in the country, said investors. Zimbabwe: Sino-Zim Power Deals Take Off. By Felex Share and Lloyd Gumbo Mega power deals sealed by President Mugabe in China last year have taken off, with construction already underway at key projects expected to add 1 500 megawatts to the national grid. 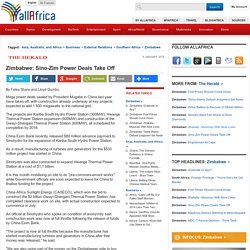 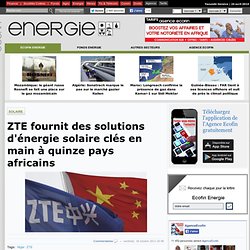