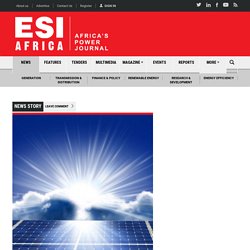 The solar park project, that will be carried out by a consortium of ASIC and Mulk-OGI, has received financial backing from the International Renewable Energy Agency (IRENA) and Abu Dhabi Fund for Development (ADFD). Sierra Leone's minister of energy H.E. Henry said: “…On behalf of the government…we would like to extend our gratitude to IRENA for coordinating the selection process, the ADFD for extending $9 million as part funding to the government of Sierra Leone and to ASIC and Mulk-OGI that will lead the project management and EPC of the project respectively.”

Solar park project – scope extended The solar park project, which will also include a 161kV transmission line, distribution networks, as well as a substation, is said to benefit urban and western rural districts around the country's capital city, Freetown. What happened to Sierra Leone’s $18 million Freetown Solar Park? Sierra Leone Telegraph: 11 March 2016 In July 2014, the government of Sierra Leone signed an agreement for a landmark renewable energy project, that could generate and supply much needed clean electricity to homes and businesses across the capital. 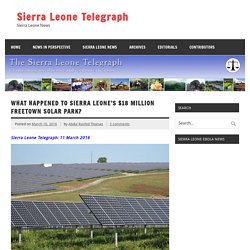 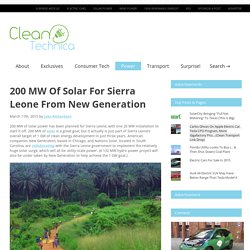 American companies New Generation, based in Chicago, and Nations Solar, located in South Carolina, are collaborating with the Sierra Leone government to implement the relatively huge solar surge, which will all be utility-scale power. (A 132 MW hydro power project will also be under taken by New Generation to help achieve the 1 GW goal.) So, a 200 MW solar power expansion at the national level might not sound like much, but about 80% of the country’s energy comes from wood fuel and charcoal. The United Nations classifies Sierra Leone as a Least Developed Country. You can imagine how difficult life would be without it, but it gets worse. Abu Dhabi To Provide Dhs33m Loan For Sierra Leone’s Solar Project - Gulf Business. Abu Dhabi Fund for Development will provide finance to construct a 6 MW solar power plant in the city of Freetown in Sierra Leone. 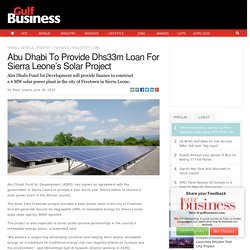 By Mary Sophia June 30, 2014 Abu Dhabi Fund for Development (ADFD) has signed an agreement with the government of Sierra Leone to provide a loan worth over Dhs33 million to finance a solar power plant in the African country. The Solar Park Freetown project includes a solar power plant in the city of Freetown and will generate around six megawatts (MW) of renewable energy for Sierra Leone, state news agency WAM reported. The project is also expected to boost public-private partnerships in the country’s renewable energy sector, a statement said.

“We believe in supporting developing countries and helping them deploy renewable energy as a substitute for traditional energy that has negative effects on humans and the environment,” said Mohammad Saif Al Suwaidi, director general of ADFD. First BioEnergy plant in Africa close to full operation in Sierra Leone  By: Adeyemi Paul - SEM on April 12, 2014. 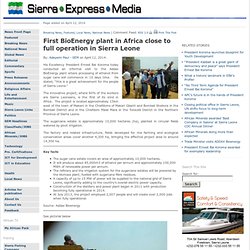 His Excellency President Ernest Bai Koroma today conducted an informal visit to the Addax BioEnergy plant where processing of ethanol from sugar cane will commence in 10 days time. He stated, “this is a great achievement for the people of Sierra Leone.” The innovative project, where 80% of the workers are Sierra Leoneans, is the first of its kind in Africa.

The project is located approximately 15km west of the town of Makeni in the Chiefdoms of Makari Gbanti and Bombali Shebora in the Bombali District and in the Chiefdom Malal Mara in the Tonkolili District in the Northern Province of Sierra Leone. The sugarcane estate is approximately 10,000 hectares (ha), planted in circular fields watered by pivot irrigation. The factory and related infrastructure, fields developed for rice farming and ecological conservation areas cover another 4,300 ha, bringing the effective project area to around 14,300 ha. Key facts Source: Addax Bioenergy See pictorial below. Endeavor Energy and Joule Africa Partner to Develop Bumbuna Phase II Power Project. Commits to Develop and Construct $700M, 202-Megawatt Hydroelectric Power Project in Sierra Leone Freetown, Sierra Leone – 18 November 2013 – Endeavor Energy, a privately owned independent power development and generation company, today announced that it has entered into a joint development agreement (JDA) with international power developer Joule Africa. 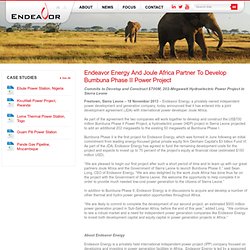 As part of the agreement the two companies will work together to develop and construct the US$700 million Bumbuna Phase II Power Project, a hydroelectric power (HEP) project in Sierra Leone projected to add an additional 202 megawatts to the existing 50 megawatts at Bumbuna Phase I. Bumbuna Phase II is the first project for Endeavor Energy, which was formed in June following an initial commitment from leading energy-focused global private equity firm Denham Capital’s $3 billion Fund VI. About Endeavor Energy About Joule Africa Media Contacts: