Power Corner: discover the solar mini-grid in Tanzania. SimGas Tanzania Infomercial (3 min) Tanzania plans to install 10,000 biogas plants by 2017. The biogas plants are environment-friendly and are expected to benefit a large number of rural communities in Tanzania. 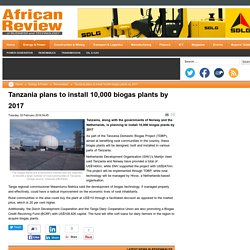 (Image source: GreenerLeith/Flickr) As part of the Tanzania Domestic Biogas Project (TDBP), aimed at benefiting rural communities in the country, these biogas plants will be designed, built and installed in various parts of Tanzania. Netherlands Development Organisation (SNV)’s Martijn Veen said Tanzania and Norway have provided a total of US$140mn, while SNV supported the project with US$247mn. The project will be implemented through TDBP, while rural technology will be managed by Hivos, a Netherlands-based organisation. Tanga regional commissioner Mwamtumu Mahiza said the development of biogas technology, if managed properly and effectively, could have a radical improvement on the economic lives of rural inhabitants.

Rural communities in the area could buy the plant at US$110 through a facilitated discount as opposed to the market price, which is 20 per cent higher. Tanzania: Pangani Biogas Project for Inauguration Today. By Zephania Ubwani Arusha — A biogas production project, supported by the Rural Energy Agency (Rea), will be launched at Boza Village in Pangani District, Tanga Region today . 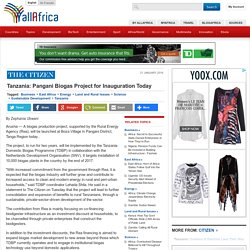 The project, to run for two years, will be implemented by the Tanzania Domestic Biogas Programme (TDBP) in collaboration with the Netherlands Development Organisation (SNV). It targets installation of 10,000 biogas plants in the country by the end of 2017. "With increased commitment from the government through Rea, it is expected that the biogas industry will further grow and contribute to increased access to clean and modern energy in rural and peri-urban households," said TDBP coordinator Lehada Shila.

He said in a statement to The Citizen on Tuesday that the project will lead to further consolidation and expansion of benefits to rural Tanzanians, through a sustainable, private-sector-driven development of the sector. Geothermal power generation deal signed. TANZANIA Geothermal Development Company Limited (TGDC) and Toshiba Corporation of Japan have concluded a memorandum of understanding (MOU) for comprehensive collaboration in the geothermal power generation business. 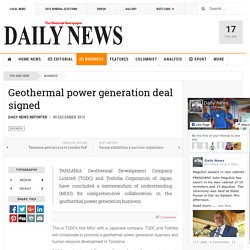 This is TGDC’s first MOU with a Japanese company. TGDC and Toshiba will collaborate to promote a geothermal power generation business and human resource development in Tanzania. TGDC, a subsidiary of Tanzania Electric Supply Company, is the sole organization with geothermal exploitation rights in Tanzania, and its business scope ranges from the development of geothermal resources to the construction of power plants. Drawing on the expertise built up through decades of experience, Toshiba will contribute to geothermal power generation in Tanzania, including the development and provision of major equipment, creation of guidelines for plant operation and management, and personnel training, according to a statement issued. Home. Boniface Njombe, General Manager of the Tanzania Geothermal Development Company (TGDC) Tanzania is set to start producing geothermal power by 2020 after identifying potential areas for the newly discovered underground source of energy. 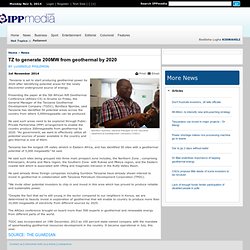 Presenting the paper at the 5th African Rift Geothermal Conference (ARGeo-C5) in Arusha on Friday, the General Manager of the Tanzania Geothermal Development Company (TGDC), Boniface Njombe, said Tanzania has identified 50 potential areas across the country from where 5,000megawatts can be produced. He said such areas need to be explored through Public-Private Partnership (PPP) arrangement to enable the country produce 200megawatts from geothermal by 2020. “As government, we want to effectively utilize all potential sources of power available in the country and geo-thermal is one of them.

Tanzania: New Geothermal Firm Established. By Alvar Mwakyusa BLESSED with the potential to generate over 4,000 megawatts of electricity from geothermal sources, the government has formed a company to steer the country into effectively and beneficially tapping it. 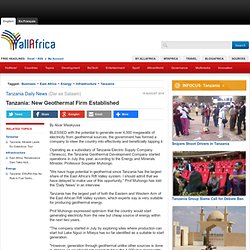 Operating as a subsidiary of Tanzania Electric Supply Company (Tanesco), the Tanzania Geothermal Development Company started operations in July this year, according to the Energy and Minerals Minister, Professor Sospeter Muhongo. "We have huge potential in geothermal since Tanzania has the largest share of the East Africa's Rift Valley system. I should admit that we have delayed to make use of this opportunity," Prof Muhongo has told the 'Daily News' in an interview. Tanzania has the largest part of both the Eastern and Western Arm of the East African Rift Valley system, which experts say is very suitable for producing geothermal energy. 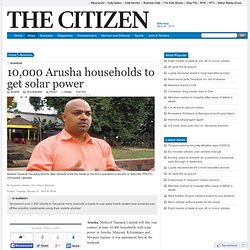 PHOTO | ZEPHANIA UBWANI In Summary “At present over 2,300 clients in Tanzania have received a ready-to-use solar home system and currently pay off the monthly instalments using their mobile phones”. Arusha. Mobisol Tanzania Limited will this year connect at least 10,000 households with solar power in Arusha, Manyara, Kilimanjaro and Mwanza regions, it was announced here at the weekend. The company started its solar home systems (SHS) programme last year and until last week over 2,300 clients were getting electricity through solar energy gadgets installed in their homes, the firm’s managing director Allan Demello said.

The progamme was initiated by the company in collaboration with Kakute Limited, an Arusha-based technology awareness and distribution company and aimed to provide efficient solar energy in homes. Each system costs between Sh500,000 and Sh2.4 million. Alternative Energy Africa. Tanzania plans first geothermal power plant, renewables.