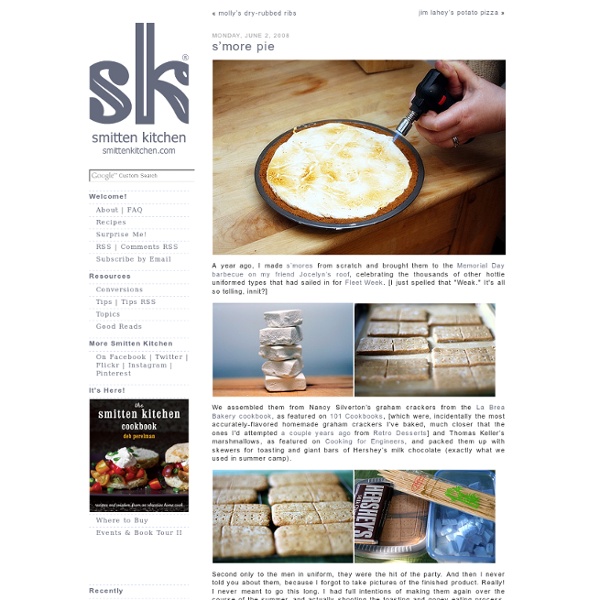 A year ago, I made s’mores from scratch and brought them to the Memorial Day barbecue on my friend Jocelyn’s roof, celebrating the thousands of other hottie uniformed types that had sailed in for Fleet Week. [I just spelled that "Weak." It's all so telling, innit?] We assembled them from Nancy Silverton’s graham crackers from the La Brea Bakery cookbook, as featured on 101 Cookbooks, [which were, incidentally the most accurately-flavored homemade graham crackers I've baked, much closer that the ones I'd attempted a couple years ago from Retro Desserts] and Thomas Keller’s marshmallows, as featured on Cooking for Engineers, and packed them up with skewers for toasting and giant bars of Hershey’s milk chocolate (exactly what we used in summer camp). Second only to the men in uniform, they were the hit of the party. Or, you would be if I were not making it up to you today with something I declare an even bigger hit: S’more Pie. I was dead wrong on each concern.

Candy and Caramel Apple Pie So sorry. I wanted to, I did. But I didn’t have a torch. So I thought about using the broiler method, and was going to do it Monday for dessert. Alas, during my baking for the cafe I used all of the heavy cream and had none to make said creme brulee. On a side note, Operation Baking GALS ship week is upon us and we have been SWAMPED! Okay, I won’t leave you without a food post. Candy Apple PieFrom MiMi Hodge, winner of Good Morning America’s “Pie of Emeril’s Eye” Contest, 2000 1. Pumpkin Pie Pop Tarts with maple glaze I didn’t know Pumpkin Pie Pop Tarts existed before I thought them up and went running to my kitchen. Turns out they do exist… and they existed all over my kitchen counter before they stopped existing because I ate them all. Ok. Not true. Kinda cool, right!? Just so we’re clear, what we’re dealing with here is two squares (ok.. yea.. rectangles) of buttery dough, stuffed with spiced pumpkin pie filling. Pumpkin pie used to be on the list of things that I hated… along with the first day of school, boys, eggplant and spiders. It would seem that pumpkin pie has grown on me. … I’ve also developed a fondness for boys. But the first day of school, eggplant and spiders call all just suck an egg. Is that an expression? I found this little gentleman on my front porch while I was baking up these pop tarts. Want. I busted out the ruler for this recipe, but I still ended up with slightly wonky tarts. Luckily butter and flour still taste good, even when they’re crooked. Man… she’s so cool. makes 9 tarts

Pumpkin Chai Tarts from The Stephanie Inn Last week i was one of the privileged few bloggers invited to Oregon to tour egg farms as a part of the Good Egg Project. It was such an amazing time – and completely involves a separate post all its own, so stay tuned for that! I loved meeting my fellow bloggers…we were all moms who love food and love blogging, and doing our best for our families. I feel so blessed to have been a part of the group. After our events were over and many of us had returned home, I rented a car and drove myself to the coast, as my flight was a red-eye and I had LOTS of time to kill. What child of the 80’s didn’t love The Goonies? Upon my arrival in Cannon Beach, I literally found myself gasping. Located on a fantastic stretch of beach, with an amazing view of Haystack Rock, the Stephanie is hands down one of the best Inns I have ever checked in to. I was very fortunate that the Executive Chef, Aaron Bedard and the Sous/Pastry Chef, Libby Cure, took the time to meet with me. Pumpkin Chai Tarts Serves 8

Black Bottom Banoffee Pie with a Pretzel Crust…from Fields of Cake Folks…you are in for one heck of a treat today. My friend Carrie (a true friend, I love her!) of Fields of Cake has made the most amazing Banoffee Pie for you. Ah-Maze-Ing. Of course, I am still away at Culinary Bootcamp, and despite the first day feeling out of sorts, Tuesday was incredible, I felt in my element, and I even forgot I was wearing my silly hat until having my picture taken in it. Well, I won’t keep you away from this pie any longer. Enjoy it, and a huge thanks to Carrie for her incredible recipe! I am a woman of excess. A few summers back I was introduced to Banoffee Pie. I like it to but I could see SO many possibilities just screaming out to me, taunting me with their sweet goodness, telling me I NEEDED to fiddle with the recipe, with the components, to make it MINE! I would run these ideas past my loving, brutally honest husband and each time it was the same…”Don’t jack with a good thing Care…” But THIS time, he wasn’t eating the pie!! OK, so did you find your drool rag?

Lattice-Top Nectarine-Blackberry Pie Mini Chocolate-Raspberry Tartlets Sour Cherry Linzer Tart blackberry and coconut macaroon tart For the last few weeks, I’ve been going nuts as it feels like every single person I know that has a food blog, has read a food blog, is a fan of food blogs or eats food itself has been gushing over Heidi Swanson of 101 Cookbooks new book, Super Natural Everyday. But not me! Because although I pre-ordered mine in early March, it didn’t arrive for what felt like an eternity. Neither of us are very good at waiting, you see. And it was absolutely worth the wait. My first pick from the book was indeed a dessert — with Passover next week, I suspected it could adapted to be flour-free — but it’s no everyday coconut macaroon. One year ago: Easy Jam TartTwo years ago: Simple Potato GratinThree years ago: Fork-Crushed Purple Potatoes and Whole Wheat Apple MuffinsFour years ago: Potato Rosemary Bread Blackberry and Coconut Macaroon Tart Adapted from Super Natural Everyday Make base: Preheat oven to 350°F with a rack in the middle of the oven.

cranberry pecan frangipane tart I am the first to admit that I do not create nearly enough of my *own* recipes. Oh, I tweak, I adapt. I skip some things and add others. But I don’t often enough decide that I want something enough to go out and find my own way to get there, which is a shame because when I do, it is never nearly the disaster I expect it to be. And when I do, it makes me so happy, so Deb (as I was the only person in this room) let this be a lesson to you: do this more often, okay? And this, this is anything but. Miso Carrot Sauce With Ginger, Hoisin and Honey Pork Riblets The problem (as if there could be one) with finding a tart shell that doesn’t lose volume when baked is that you need to rejigger your fillings so they actually, well, fill things. 1 cup coarsely chopped pecans 1 1/2 tablespoons all purpose flour 1/2 cup plus 3 tablespoons sugar 9 tablespoons (1 stick plus 1 tablespoon) unsalted butter, at room temperature 1 large egg 1 large egg white 1 tablespoon brandy (optional) 1 1/2 teaspoon orange zest

whole lemon tart Everyone has a favorite lemon tart, don’t they? I think of them as one those pastries that people obsess over to the point that crafting a great one is practically considered a higher calling. And I’d joke about this (okay, well, just a little) but if you’ve ever had a good, nay, great one, you totally get it. But I do have a favorite, and it is so ridiculously simple that when I made it last week I actually kicked myself for waiting so long since the last time I gave it a spin. This is such a great one to have in your files because it doesn’t demand a lot of your grocery list: just one whole lemon. One year ago: Matzo Ball Soup Whole Lemon Tart Loosely inspired by a version from the Paris pastry shop, Rollet-Pradier [Updated recipe as 1/26/11] I fixed it. I’ve also drastically streamlined the directions — the whole tart is now made in the food processor, as I always have at home. 1 partially baked 9-inch Great Unshrinkable Tart Shell, or your favorite sweet tart shell