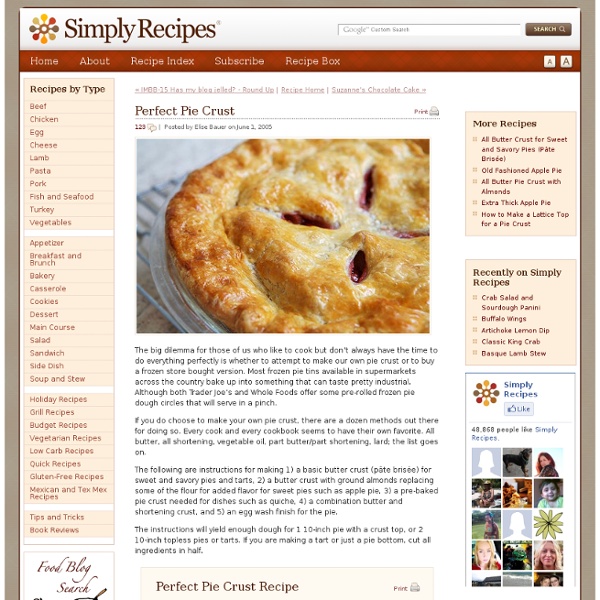 1 Combine flour, salt, and sugar in a food processor; pulse to mix. Add butter and pulse 6 to 8 times, until mixture resembles coarse meal, with pea size pieces of butter. Add ice water 1 Tbsp at a time, pulsing until mixture just begins to clump together. If you pinch some of the crumbly dough and it holds together, it's ready. If the dough doesn't hold together, add a little more water and pulse again. 2 Remove dough from machine and place in a mound on a clean surface. 3 Remove one crust disk from the refrigerator. 4 Add filling to the pie. 5 Roll out second disk of dough, as before. All Butter Crust with Almonds Ingredients 2 cups all-purpose flour, plus extra for rolling1/2 cup finely ground blanched almonds or almond flour 1 cup (2 sticks) unsalted butter, very-cold, cut into 1/2 inch cubes1 teaspoon salt1 heaping teaspoon brown sugar6 to 8 Tbsp ice water, very cold Follow directions as for the All Butter Crust Pâte Brisée, but with the above ingredients. To Pre-Bake a Pie Crust

5 Secrets to Perfect Pancakes | More Family Fun Photo by Stephanie FoleyBy Tanya Steel, Epicurious.com February always holds a lot of meaning for me: Valentine's Day, my boys' birthday, Thank a Mailman Day, oh, and Pancake Month. I love me some flapjacks. See also: Aphrodisiacs to Sweeten Your Valentine's Day Shrove Tuesday (February 21) historically revolves around the pancake, the theory being adherents should use up all of the richer ingredients in their home before Lent, such as eggs, butter, and sugar. While I could have pancakes morning, noon, and night (and have), it did take some perfecting to get them from rock-like to fluffy, ethereal clouds of batter-y goodness. 1. 3. Related: DIY Decor: Valentine's Day Crafts 4. Are you in the mood for one or two right about now? More from Epicurious.com: • Healthy Comfort Food Recipes for Any Day• Chef's Super Bowl Recipes• One-Dish Wonders: Our Favorite Casserole Recipes • Blue-Ribbon Chicken Recipes

My Favorite Meatloaf This is a recipe from my cookbook, and I’m sharing it here because I love it. I’m tired of meatloaf getting a bad rap. Tired of it, I tell you! Within the pages of my cookbook, I proposed that people’s perception of meatloaf became permanently skewed when a certain disheveled rock singer burst on the scene back in the seventies…but after much consideration, I’ve decided that it’s actually the word “loaf” that has contributed the most to meatloaf being such a maligned food. You didn’t know my cookbook delved into such anthropological and sociological issues, did you? Don’t worry. So open your minds for a moment. See? Oops. It’s like in the movie “Somewhere in Time” where Christopher Reeve (rest his soul) is blissfully living in they year 1912, then discovers the 1979 penny in his pocket and is suddenly and violently sucked back to present day. And now. I know this is a really weird photo, but I’m a really weird person so it fits. Grody, I realize, but bear with me. But you don’t have to.

Cheesecake Brownies Recipe : Food Network Kitchens Directions Position the rack in the lower third of the oven and preheat the oven to 350 degrees F. Line an 8 by 8-inch baking pan with foil so it hangs over the edges by about 1-inch. Spray with cooking spray. Cheesecake topping: In a medium bowl and using an electric mixer at medium speed, beat the cream cheese until smooth and creamy, about 1 minute. Beat in the sugar and the vanilla until very smooth, 1 to 2 minutes. Brownie layer: Put the chocolate, butter, and oil in a small microwave-safe bowl and heat at 75 percent power for 30 seconds. Combine the flour, cocoa powder, baking powder, salt, and cayenne in a medium bowl. Combine the brown sugar and granulated sugar in a large bowl. Reserve 1/2 cup brownie batter and set aside. Bake until the top is just set, 40 to 45 minutes. Copyright 2009 Television Food Network, G.P. Food Network Kitchens created this lightened-up recipe from a user submission. From Food Network Kitchens

3 Pie Inspired Pop-Tart Recipes One morning I woke up with a real hankering (yes, hankering) for a slice of pie. So I thought it would be fun to create pie inspired homemade pop-tarts. I made three different flavors; pumpkin pie, pecan pie and apple pie! These are super easy to make and you can cut them out to be traditional rectangle-shaped tarts, or you can use any large cookie cutter to make your pop-tarts into cute shapes (I made hearts!). All you need to whip up a batch of these for yourself is puff pastry and your choice of 'pie' fillings. For the apple pie pop-tarts I made the filling with 1 peeled and finely chopped apple (I used granny smith, but any variety is fine), 3 tablespoons brown sugar, 1 tablespoon sugar and 1/2 teaspoon cinnamon. For the pumpkin pie pop-tarts I made the filling with 1/2 cup pumpkin, 2 tablespoons brown sugar, 1/4 cup ricotta cheese, 1/4 teaspoon cinnamon, and a pinch of nutmeg.

Patricia's Holiday Fruitcake Recipe Best to slice this fruitcake with a knife with a serrated edge, such as a bread knife. Method 1 Preheat oven to 325°F. In a small bowl, mix together the baking soda and sour cream; set aside. 2 Combine the dates, raisins, cherries, and nuts with 1/4 cup of the flour and toss to coat the fruit and nuts. 3 Cream together the butter and sugar. 4 Pour batter into a prepared loaf pan (see note) and bake at 325°F for one and a half to two hours or until a toothpick or wooden skewer inserted into the center comes out clean. 5 Wrap tightly with aluminum foil and plastic wrap to store. Note: Line the loaf pan with greased parchment paper or brown baking paper, cut to fit the pan. Cinnamon Toast Rolls - Circle B Kitchen The USDA released its new food pyramid the other day (which is actually a plate now instead of a pyramid), and I am sorely disappointed to report that cinnamon rolls did not appear anywhere on that plate. I think by now most of us know what should be on our dinner plate in terms of healthy, well-rounded nutrient-laden meals, but it is my considered opinion that our breakfast plate should include cinnamon rolls now and then. And not just any cinnamon roll, mind you, but how ‘bout a homemade cinnamon roll hybrid that is a cross between a cinnamon roll and cinnamon toast, is super easy to make and gosh darn delicious. In honor of their ancestry, I call these little gems cinnamon toast rolls, and here’s all you need to make them… Yep. Trim the crusts off of the bread Roll the bread really flat Brush both sides of the bread with butter Sprinkle with cinnamon sugar Roll in any fashion you like (I’ve also folded them into little triangles) Cinnamon Toast Rolls Click here for a printable recipe

Molasses Spice Cookies Recipe Preparation time: 30 minutes. Method 1 Preheat oven to 375°F. Mix together flour, baking soda, salt, cinnamon, ginger, cloves, allspice together in a bowl and set aside. 2 Use an electric mixer and beat the butter for 2 minutes. 3 Add dry ingredients and beat at low speed until just combined, about 30 seconds. 4 Place remaining 1/3 cup of granulated sugar in a shallow bowl. 5 Bake until the outer edges of the cookies begin to set and centers are soft and puffy, about 11 to 13 minutes. Note: do not overcook. Optional Glaze When cookies have cooled, lay out over a sheet of wax paper.

Eggo-Style Buttery Waffles Try Kitchen View! Take your computer to the kitchen and view this recipe full-screen, with step-by-step directions. Enter Kitchen View 1 Whisk the flour, sugar, baking powder, and salt together in a large bowl. 2 In a separate bowl, stir the butter, buttermilk, milk, and egg yolks together. 3 With an electric hand mixer or whisk attachment of a stand mixer, whip the egg whites until soft peaks form. 4 Pour the wet ingredients into the dry ingredients and stir until just incorporated (there still may be some lumps), then gently fold the whipped egg whites into the batter. 5 Cook in a preheated waffle maker according to manufacturer’s instructions. 6 Serve with butter, powdered sugar, maple syrup, fruit, or eat plain.