Real vs Virtual Crime: Illinois Senator Wants to Ban Violent Video Games - Impact Magazine. Cora-Laine Moynihan TW: Discussion of video-game violence and sexual assault Violent video games have been under scrutiny ever since the release of Death Race in 1976. 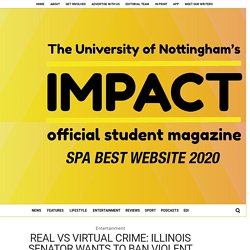 Their depictions of murder, maiming, dismemberment or sexual assault fuelled many campaigns for regulation. As graphics become ever more realistic, fears over the influence of violent games continue to rise, so much so that an Illinois Senator is trying to ban them completely. The Bill. Does dodgeball really encourage bullying? Fortnite: Gamer charged with assault during live stream. Image copyright Getty Images A Sydney gamer has been charged after he was heard allegedly assaulting a woman during a live stream of the hugely popular game Fortnite. 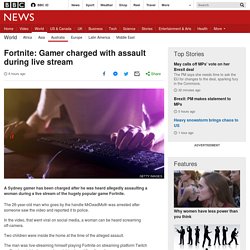 The 26-year-old man who goes by the handle MrDeadMoth was arrested after someone saw the video and reported it to police. Police shoot dead man after alleged Call of Duty 'swatting' hoax. Media playback is unsupported on your device A man has been arrested after an alleged "swatting" prank call led to police shooting dead a 28-year-old man. 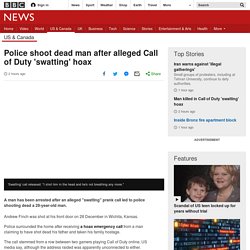 Andrew Finch was shot at his front door on 28 December in Wichita, Kansas. Police surrounded the home after receiving a hoax emergency call from a man claiming to have shot dead his father and taken his family hostage. The call stemmed from a row between two gamers playing Call of Duty online, US media say, although the address raided was apparently unconnected to either. Police have said they believe the report was an act of "swatting" where a person makes a false report to send police to another person or fake address. 'Innocent victim'

Esports 'too violent' to be included in Olympics. Image copyright Getty Images The President of the International Olympic Committee says esports are too violent to be part of the Olympics. 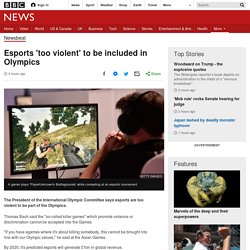 Thomas Bach said the "so-called killer games" which promote violence or discrimination cannot be accepted into the Games. "If you have egames where it's about killing somebody, this cannot be brought into line with our Olympic values," he said at the Asian Games. By 2020, it's predicted esports will generate £1bn in global revenue. Florida shooting: Video gamer kills two at tournament. Media playback is unsupported on your device A participant in a video game tournament in Jacksonville, Florida, has shot dead two people before killing himself, police say. 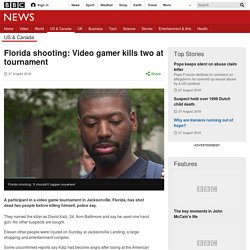 They named the killer as David Katz, 24, from Baltimore and say he used one hand gun. No other suspects are sought. Eleven other people were injured on Sunday at Jacksonville Landing, a large shopping and entertainment complex. Some unconfirmed reports say Katz had become angry after losing at the American football eSports event. Game Trains Schools for Mass Shooting Response. Online gamer killed for selling virtual weapon - World - www.smh.com.au. Chinese gamer sentenced to life. A Shanghai online gamer has been given a suspended death sentence for killing a fellow gamer. 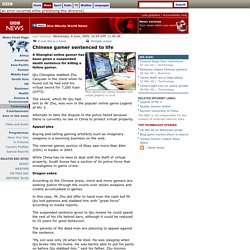 Qiu Chengwei stabbed Zhu Caoyuan in the chest when he found out he had sold his virtual sword for 7,200 Yuan (£473). The sword, which Mr Qiu had lent to Mr Zhu, was won in the popular online game Legend of Mir 3. Attempts to take the dispute to the police failed because there is currently no law in China to protect virtual property. Postal (video game) Postal is a 3D shooter with mainly isometric, but also some top-down levels featuring hand-painted backgrounds. 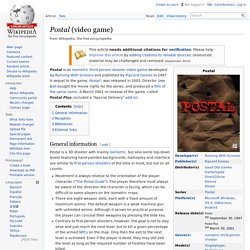 Gameplay and interface are similar to first-person shooters of the time in most, but not on all counts: Movement is always relative to the orientation of the player character ("The Postal Dude"). The player therefore must always be aware of the direction the character is facing, which can be difficult to some players on the isometric maps.There are eight weapon slots, each with a fixed amount of maximum ammo. Manhunt (video game) An 'execution' in Manhunt; Cash suffocating a hunter with a plastic bag. 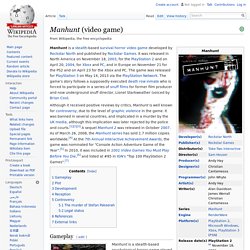 Manhunt is a stealth-based psychological horror game played from a third-person perspective. The game consists of twenty levels, called "scenes", as well as four unlockable bonus scenes.[8] Players survive the scenes by dispatching enemy gang members, occasionally with firearms, but primarily by stealthily executing them.[9] At the end of each scene, the player is graded based on their performance, and awarded one to five stars. 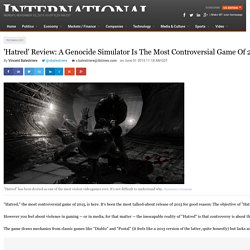 It's been the most talked-about release of 2015 for good reason: The objective of "Hatred," from Polish developer Destructive Creations, is simply to kill as many people as possible, whether they are armed or not, to “purge” the world. However you feel about violence in gaming -- or in media, for that matter -- the inescapable reality of "Hatred" is that controversy is about the only thing the game has going for it.

"Hatred" doesn’t bring anything new, interesting or special to the table -- it has only an outmoded sense of shock value. It hasn’t been worthy of the attention it’s been given, but it will continue to infuriate and offend those who will never play it. Death Race (1976 video game) In the game, one or two players control an on-screen car with a steering wheel and an acceleration pedal. 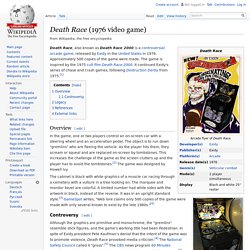 Games violence study is launched. The government is asking for evidence for a new study of the effect of violent computer games on children. Psychologist Tanya Byron will head the study, which will also examine how to protect children from online material. The review is due to be launched by Dr Byron - together with Schools Secretary Ed Balls and Culture Secretary James Purnell - at a school in east London. BBC Two - Horizon, 2014-2015, Are Video Games Really That Bad? Frustration, Video Game Violence, and Real-Life Aggression. Carry the frustration of injustice in this game about racist police violence / Offworld. Akira Thompson's striking work challenges one of the biggest misconceptions about police violence against black people in America, and offers privileged players the chance to experience the truth. As designed systems, games can create spaces for people to grasp how infrastructures work, to test theories—and often to internalize how the systems of our world may not work, may promote inequality.

Frustration games. Video games are not making us more violent, study shows. Major new research into the effects of violent movies and video games has found no long-term links with real-life violence. The methodology of previous laboratory studies, which have used spikes in short-term aggressive behaviour to suggest a causal relationship between screened and real-life violence have also been questioned in the report, published in the Journal of Communication. Christopher Ferguson, a psychologist at Stetson University in Florida, carried out two studies into media violence.

Do video games make people violent? More than 200 academics have signed an open letter criticising controversial new research suggesting a link between violent video games and aggression. The findings were released by the American Psychological Association. It set up a taskforce that reviewed hundreds of studies and papers published between 2005 and 2013. The American Psychological Association concluded while there was "no single risk factor" to blame for aggression, violent video games did contribute.

"The research demonstrates a consistent relation between violent video game use and increases in aggressive behaviour, aggressive cognitions and aggressive affect, and decreases in pro-social behaviour, empathy and sensitivity to aggression," said the report. Video game controversies. Video game controversies are societal and scientific arguments about whether the content of video games change the behavior and attitudes of a player, and whether this is reflected in video game culture overall. Since the early 1980s, advocates of video games have emphasized their use as an expressive medium, arguing for their protection under the laws governing freedom of speech and also as an educational tool.

Detractors argue that video games are harmful and therefore should be subject to legislative oversight and restrictions.