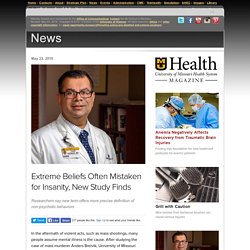 Anti-bullying program "KiVa" that focuses on teaching bystanders to intervene is one of the most effective in the world, reducing bullying by nearly twofold and improving mental health outcomes in the most severely bullied students : science. Why Escalation Happens. The Ukrainian crisis is officially below-the-fold now, as what began with large-scale actions—the appearance of Russian troops in Ukraine, the annexation of Crimea—becomes day-to-day, piece-by-piece escalation toward actual war as Ukrainian forces spar with pro-Russian separatists: downed helicopters, gunfights over checkpoints and bridges, kidnappings, and the apparent torpedoing of a Russian/Ukrainian de-escalation agreement. 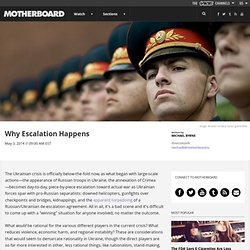 All in all, it's a bad scene and it's difficult to come up with a "winning" situation for anyone involved, no matter the outcome. What would be rational for the various different players in the current crisis? What reduces violence, economic harm, and regional instability? René Girard's theories still explain the violence all around us. Peace is the perennial hope of humanity. 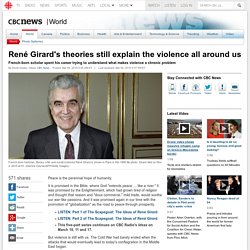 It is promised in the Bible, where God "extends peace … like a river. " It was promised by the Enlightenment, which had grown tired of religion and thought that reason and "doux commerce," mild trade, would soothe our war-like passions. Historians become scientists to reveal the real reason for a decline in violent crime. (Phys.org) —A scientific analysis of 20 million words recorded during 150 years of criminal trials at London's Old Bailey reveals how changes in culture rather than law helped to reduce violent crime, according to a co-authored University of Sussex study. 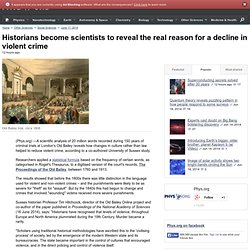 Researchers applied a statistical formula based on the frequency of certain words, as categorised in Roget's Thesaurus, to a digitised version of the court's records, The Proceedings of the Old Bailey, between 1760 and 1913. The results showed that before the 1800s there was little distinction in the language used for violent and non-violent crimes – and the punishments were likely to be as severe for "theft" as for "assault". But by the 1840s this had begun to change and crimes that involved "wounding" victims received more severe punishments. Study suggests police systematically undercount rape reports. Corey Rayburn Yung, an associate professor at the University of Kansas School of Law, has published a startling study in the Iowa Law Review. 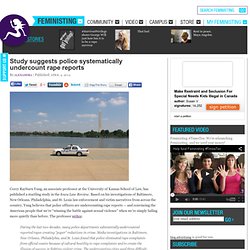 Based on his investigations of Baltimore, New Orleans, Philadelphia, and St. Louis law enforcement and victim narratives from across the country, Yung believes that police officers are undercounting rape reports — and convincing the American people that we’re “winning the battle against sexual violence” when we’re simply failing more quietly than before.

The professor writes: During the last two decades, many police departments substantially undercounted reported rapes creating “paper” reductions in crime. Coerced Sex Not Uncommon for Young Men, Teenage Boys, Study Finds. WASHINGTON — A large proportion of teenage boys and college men report having been coerced into sex or sexual behavior, according to research published by the American Psychological Association. 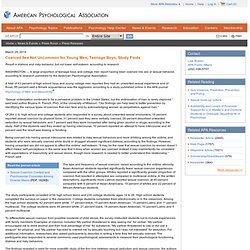 One percent of the population is responsible for 63 percent of violent crime convictions - University of Gothenburg, Sweden. News: Nov 22, 2013 The majority of all violent crime in Sweden is committed by a small number of people. 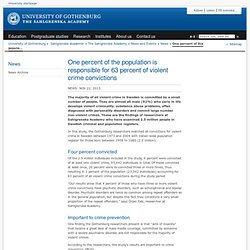 They are almost all male (92%) who early in life develops violent criminality, substance abuse problems, often diagnosed with personality disorders and commit large number non-violent crimes. These are the findings of researchers at Sahlgrenska Academy who have examined 2.5 million people in Swedish criminal and population registers.

In this study, the Gothenburg researchers matched all convictions for violent crime in Sweden between 1973 and 2004 with nation-wide population register for those born between 1958 to 1980 (2.5 million). Four percent convicted. Edmonton Sexual Assault Awareness Campaign: 'Don't Be That Guy' So Effective City Relaunches With New Posters (PHOTOS) It was a campaign so effective at getting the word out to potential offenders of sexual assault, the Edmonton police are bringing it back. 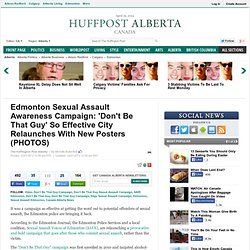 According to the Edmonton Journal, the Edmonton Police Services and a local coalition, Sexual Assault Voices of Edmonton (SAVE), are relaunching a provocative and bold campaign that goes after those who commit sexual assault, rather than the victim. The "Don't Be That Guy" campaign was first unveiled in 2010 and targeted alcohol-related assaults. The campaign has now expanded to include sexual assault of all types, including same-sex assault. One of the newly designed posters shows two men sitting on a bed with one man's hand of the chest of the other. The text below reads "It's not sex...when he changes his mind. " How Canada's sex-assault laws violate rape victims. Mystery Of New York's Falling Crime Rate Remains Unsolved. (ISNS) -- In the last 15 years, something dramatic has happened in New York City: the crime rate has dropped precipitously, making the city -- where crime once was of epic proportions -- the safest major city in America. 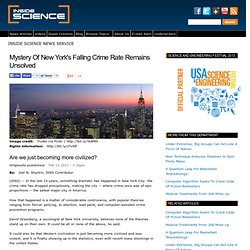 How that happened is a matter of considerable controversy, with popular theories ranging from fiercer policing, to abortion, lead paint, and computer-assisted crime prevention programs. Eliminate Lead. Illustration: Gérard DuBois When Rudy Giuliani ran for mayor of New York City in 1993, he campaigned on a platform of bringing down crime and making the city safe again. 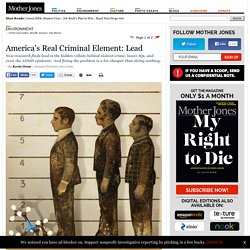 It was a comfortable position for a former federal prosecutor with a tough-guy image, but it was more than mere posturing. Crime: The curious case of the fall in crime. The Buddy System. Don't Murder Anybody Week! Homicide in a Comparative Context. Sociology: Crimes against People. Dangerous Gun Myths. The witness was Gayle Trotter, a fellow at the Independent Women’s Forum, a right-wing public policy group that provides pseudofeminist support for extreme positions that are in fact dangerous to women.

She told the Senate Judiciary Committee that the limits on firepower proposed by Dianne Feinstein, a California Democrat, would harm women because an assault weapon “in the hands of a young woman defending her babies in her home becomes a defense weapon.” She spoke of the “peace of mind” and “courage” a woman derives from “knowing she has a scary-looking gun” when she’s fighting violent criminals. It is not at all clear where Ms. Trotter gained her insight into confrontations between women and heavily armed intruders, since it is not at all clear that sort of thing happens often. But it is important to note that Ms. Ms. But there is a more fundamental problem with the idea that guns actually protect the hearth and home. How Japan Virtually Eliminated Shooting Deaths. In part by forbidding almost all forms of firearm ownership, Japan has as few as two gun-related homicides a year.

Police shootings: Patience is a powerful weapon. Last week, a young man was shot by police as he brandished a knife aboard an empty Toronto streetcar. Can Murder Be Tracked Like An Infectious Disease? If I asked you to think of a murderer, what's the image that springs to mind? If you're like most people, you'll probably think of an evil psychopath, or someone bent on revenge. Perhaps you'll see a criminal mastermind, who eliminates rivals on his way to riches. Or a strung-out drug addict, who kills because she needs money to get high.