Gun Violence. A minority of Americans own guns, but just how many is unclear. By Drew DeSilver More than a third of Americans say they or someone in their household owns a gun. 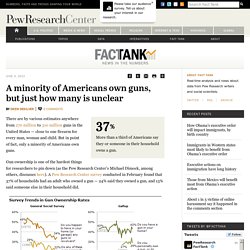 There are by various estimates anywhere from 270 million to 310 million guns in the United States — close to one firearm for every man, woman and child. But in point of fact, only a minority of Americans own guns. Gun ownership is one of the hardest things for researchers to pin down (as the Pew Research Center’s Michael Dimock, among others, discusses here). A Pew Research Center survey conducted in February found that 37% of households had an adult who owned a gun — 24% said they owned a gun, and 13% said someone else in their household did. Chart of the Week: Most new gun laws since Newtown ease restrictions. By Drew DeSilver In the immediate aftermath of last year’s school shooting in Newtown, Connecticut, majorities of Americans favored several proposals to tighten rules on who could buy guns and what types of guns and ammunition they could buy, according to a Pew Research Center survey. 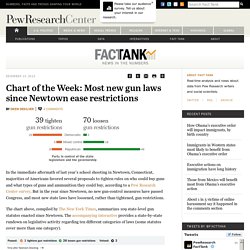 But in the year since Newtown, no new gun-control measures have passed Congress, and most new state laws have loosened, rather than tightened, gun restrictions. The chart above, compiled by The New York Times, summarizes 109 state-level gun statutes enacted since Newtown. The accompanying interactive provides a state-by-state rundown on legislative activity regarding ten different categories of laws (some statutes cover more than one category). 5 facts about the NRA and guns in America. The National Rifle Association, one of the most politically powerful advocacy groups in the U.S., begins its annual convention today in Indianapolis, featuring a lineup of Republican governors and senators as speakers and also a planned rally. 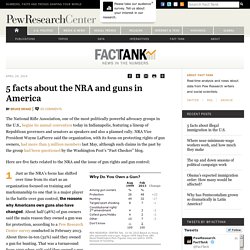 NRA Vice President Wayne LaPierre said the organization, with its focus on protecting rights of gun owners, had more than 5 million members last May, although such claims in the past by the group had been questioned by the Washington Post’s “Fact Checker” blog. Here are five facts related to the NRA and the issue of gun rights and gun control: Just as the NRA’s focus has shifted over time from its start as an organization focused on training and marksmanship to one that is a major player in the battle over gun control, the reasons why Americans own guns also have changed.

The demographics and politics of gun-owning households. Americans with young children in their home are just as likely as other adults to have a gun in their household, according to newly released survey data from the Pew Research Center. 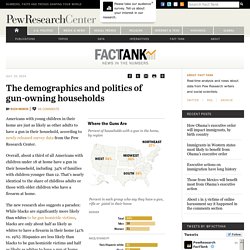 Overall, about a third of all Americans with children under 18 at home have a gun in their household, including 34% of families with children younger than 12. That’s nearly identical to the share of childless adults or those with older children who have a firearm at home. The new research also suggests a paradox: While blacks are significantly more likely than whites to be gun homicide victims, blacks are only about half as likely as whites to have a firearm in their home (41% vs. 19%).

America's Gun Problem In One Chart. The United States has the highest gun ownership rates in the world and the second highest rate of gun deaths among industrialized nations. 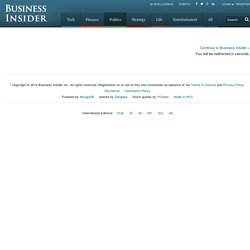 That's not a coincidence. Looking at developed nations, the U.S. is the end point of a staggering trend where the higher the rate of gun ownership, the more people die from gun wounds. In the wake of the Sandy Hook massacre, Mark Reid, a machine learning researcher at Australian National University, has run a quick statistical analysis of gun death data in industrialized nations. His charts show how unique the U.S. is among its peers when it comes to the way the country handles guns. 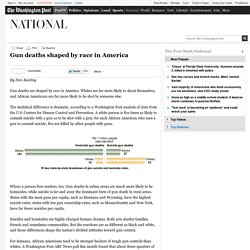 Whites are far more likely to shoot themselves, and African Americans are far more likely to be shot by someone else. The statistical difference is dramatic, according to a Washington Post analysis of data from the U.S. Mass Shootings on the Rise, New FBI Study Shows. Kevork Djansezian/Reuters A new study released Wednesday by the FBI shows that mass shootings, or "active shooter incidents," as the bureau calls them, are increasing in frequency. 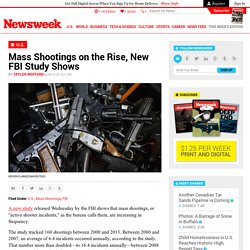 The study tracked 160 shootings between 2000 and 2013. Between 2000 and 2007, an average of 6.4 incidents occurred annually, according to the study. That number more than doubled—to 16.4 incidents annually—between 2008 and 2013. "This trend reinforces the need to remain vigilant regarding prevention efforts," the study said, "and for law enforcement to aggressively train to better respond to—and help communities recover from—active shooter incidents.

" Gun Deaths in U.S. Twice as High Among African-Americans as Caucasians. Tech & Science Surrendered handguns sit in a plastic bin during a gun buyback event at the Los Angeles Sports Arena on May 31, 2014. 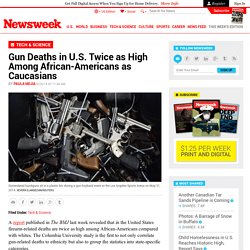 Kevork Djansezian/Reuters A report published in The BMJ last week revealed that in the United States firearm-related deaths are twice as high among African-Americans compared with whites. The Columbia University study is the first to not only correlate gun-related deaths to ethnicity but also to group the statistics into state-specific categories. The researchers examined firearm-related fatalities within each individual state from 2000 to 2010. Most troubling, though, was the rate difference between ethnicities: firearm-related fatality rates for African-Americans were twice as high as the reported rates for Caucasians. Some Uncomfortable Numbers About Guns in America. What's so bad about Americans having all these guns? 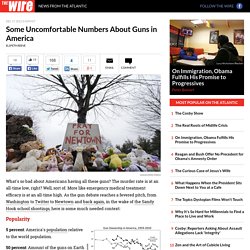 The murder rate is at an all-time low, right? Well, sort of. More like emergency medical treatment efficacy is at an all-time high. As the gun debate reaches a fevered pitch, from Washington to Twitter to Newtown and back again, in the wake of the Sandy Hook school shootings, here is some much needed context: Popularity 5 percent: America's population relative to the world population. 50 percent: Amount of the guns on Earth owned by Americans, CNN reports. Gun Owners Still Overwhelmingly White Males. The Pew Research Center's latest survey on gun control this week provided a familiar profile of the typical gun owner in the United States: adult, white and male. 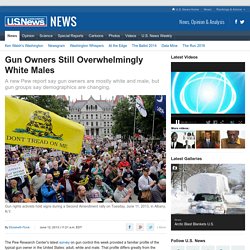 That profile differs greatly from the makeup of the country, according to Pew. White men represent just a third of the U.S. population, but about 60 percent of adults with guns in America today are white men. [POLL: 62 Percent Want Senate to 'Move On' From Gun Control] This revelation isn't new. Men, Married, Southerners Most Likely to Be Gun Owners. PRINCETON, NJ -- Men are three times more likely than women to personally own guns, representing one of the largest demographic differences in gun ownership, according to an analysis of Gallup polls from 2007 to 2012. Gun ownership also varies significantly by region, with Southerners more likely to own guns than those living in other regions of the United States. Marriage is also a strong predictor of gun ownership. These findings are based on aggregated data from six separate Gallup polls that asked about gun ownership -- one each year from 2007 through 2012.

The analyses presented here are based on interviews with more than 6,000 U.S. adults. Across those six data sets, an average of 30% of Americans said they personally own a gun. Illegal Firearms Trafficking and Tracing. On this page find: Overview Federal law prohibits the sale of firearms or ammunition to juveniles and people who have been convicted of felonies and some violent misdemeanors. Federally mandated background checks keep these people from buying firearms at licensed dealers.

Prohibited buyers may turn to the largely unregulated secondary market — gun sales between private individuals. Homicide and suicide rates associated with implementation of the Br... Banished for Questioning the Gospel of Guns. Photo BARRY, Ill. — The byline of Dick Metcalf, one of the country’s pre-eminent gun journalists, has gone missing. It has been removed from Guns & Ammo magazine, where his widely-read column once ran on the back page. He no longer stars on a popular television show about firearms.

Gun companies have stopped flying him around the world and sending him the latest weapons to review. In late October, Mr. The backlash was swift, and fierce. Views on Gun Laws Unchanged After Aurora Shooting. Overview There has been no significant change in public views on the issue of gun control and gun rights following the July 20th shooting at a movie theater in Aurora, Colorado. Currently, 47% say it is more important to control gun ownership, while 46% say it is more important to protect the rights of Americans to own guns. That is virtually unchanged from a survey earlier this year in April, when 45% prioritized gun control and 49% gun rights.

Other recent major shootings also had little effect on public opinion about gun laws. There was no significant change in the balance of opinion about gun rights and gun control after the January, 2011 shooting in Tucson, Arizona in which Congresswoman Gabrielle Giffords was injured. The latest national survey by the Pew Research Center for the People & the Press, conducted July 26-29, 2012 among 1,010 adults, shows that relatively few Americans view the shooting in Aurora as a sign of broader social problems.

ATF: 68,000 guns in Mexico traced to U.S. By Pete Yost April 27, 2012 Mexican authorities have recovered 68,000 guns in the past five years that have been traced back to the United States, the federal government said Thursday. The flood of weapons underscores complaints from Mexico that the United States is responsible for arming the drug cartels plaguing America’s southern neighbor. More than 47,000 people in Mexico have been killed in six years of violence between warring cartels. How The NRA Built A Massive Secret Database Of Gun Owners. Gun control: Most Americans support universal background checks, but worry they'd lead to gun confiscation.

Aaron Blake makes a great catch from the national Quinnipiac poll. So, a national gun registry is illegal. NRA’s rhetoric on gun “confiscation” appears to be working. MAP: Which Kills More People in Your State—Cars or Guns? Back in December, not long after the massacre at Sandy Hook school massacre in Newtown, Connecticut, Bloomberg News published a study suggesting that by 2015, guns would kill more Americans than traffic accidents do.

A man was shot for texting at a movie. This isn't an anomaly in America. Poll: Majority of Republican Men Support Universal Background Checks on Gun Sales. December 6, 2013 A majority of Republican and Republican-leaning men, 53 percent, would be "very pleased" or "somewhat pleased" if legislation requiring universal background checks on all gun sales was passed by Congress and signed by the president, according to the latest United Technologies/National Journal Congressional Connection Poll. At the Vegas Gun Trade Show, It's the Year of the Woman. Massacres and Madness. The public may be waking up to the mountain of rape allegations now, but women were coming forward years ago to warn the Jell-O Man was not so sweet.

In 2007—seven years before she publicly came forward—I spoke with Joan Tarshis, a former Hollywood publicist who claimed that Bill Cosby raped her. Children and Guns - The Hidden Toll. A few days later in Georgia, Cassie Culpepper, 11, was riding in the back of a pickup with her 12-year-old brother and two other children. Her brother started playing with a pistol his father had lent him to scare coyotes. Frontline: hot guns: "How Criminals Get Guns"

By Dan Noyes, Center for Investigative Reporting Ask a cop on the beat how criminals get guns and you're likely to hear this hard boiled response: "They steal them. " But this street wisdom is wrong, according to one frustrated Bureau of Alcohol, Tobacco and Firearms (ATF) agent who is tired of battling this popular misconception. Did Jefferson really say that? Why bogus quotations matter in gun debate. A quotation attributed to former President Thomas Jefferson, but not verified by researchers, got CNN commenters talking. Story on ex-Marine's letter about assault weapons garnered lots of commentsThomas Jefferson quote was posted dozens of times, but researchers cannot verify itReaders shared theories about Founding Fathers' attitudes toward firearmsWhat's your favorite historical quote? The Secret History of Guns. Gun Control – Founding Father Style - Guns. The Second Amendment Is All for Gun Control.