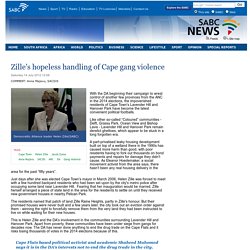 Like other so-called “Coloured” communities - , , Ocean View and Bishop Lavis - Lavender Hill and remain derelict ghettoes, which appear to be stuck in a long forgotten era. A part-privatised leaky housing development built on top of a wetland there in the 1990s has caused more harm than good, with poor residents having to fork out thousands on bond payments and repairs for damage they didn't cause. Cape Town on a mission to rid Cape Flats of gangs:Monday 15 April 2013. The removal of the graffiti serves as a warning to the gang groups that defacing public property will not be tolerated. 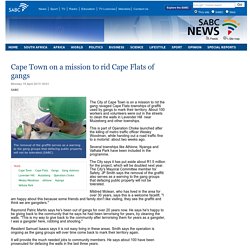 (SABC) The City of Cape Town is on a mission to rid the gang ravaged Cape Flats townships of graffiti used by gangs to mark their territory. About 100 workers and volunteers were out in the streets to clean the walls in Lavender Hill near Muizeberg and other townships. This is part of Operation Choke launched after the killing of metro traffic officer Wesley Woodman, while handing out a road traffic fine to a motorist about two weeks ago. Several townships like Athlone, Nyanga and Valhala Park have been included in the programme. The City says it has put aside about R1.5 million for the project, which will be doubled next year. 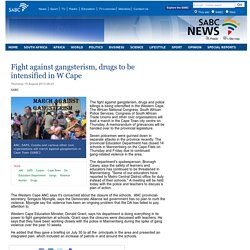 The African National Congress, South African Police Services, Congress of South African Trade Unions and other civic organisations will lead a march in the Cape Town city centre on Thursday. A memorandum of grievances will be handed over to the provincial legislature. Seven policemen were gunned down in separate attacks in the province recently. Police can handle Cape gangs: Phiyega :Tuesday 27 August 2013. Police Commissioner Phiyega maintains the army is not needed in the fight against Cape gangs. 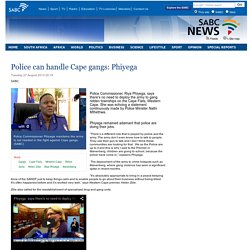 (SABC) Police Commissioner, Riya Phiyega, says there's no need to deploy the army to gang ridden townships on the Cape Flats, Western Cape. She was echoing a statement continuously made by Police Minister Nathi Mthethwa. Phiyega remained adamant that police are doing their jobs. “There’s a different role that is played by police and the army. The deployment of the army to crime hotspots such as Manenberg, where gang violence has seen a significant spike in recent months. “It’s absolutely appropriate to bring in a peace-keeping force of the SANDF just to keep things calm and to enable people to go about their business without being killed. Zille also called for the reestablishment of specialised drug and gang units. 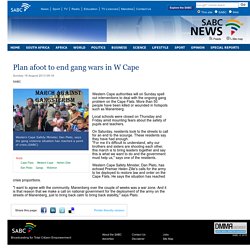 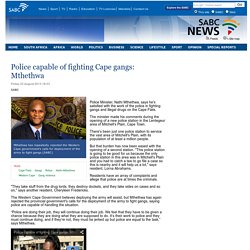 (SABC) Police Minister, Nathi Mthethwa, says he's satisfied with the work of the police in fighting gangs and illegal drugs on the Cape Flats. The minister made his comments during the opening of a new police station in the Lentegeur area of Mitchell's Plain, Cape Town. There's been just one police station to service the vast area of Mitchell's Plain, with its population of at least a million people. But that burden has now been eased with the opening of a second station. Residents have an array of complaints and allege that police are at times the criminals. "They take stuff from the drug lords, they destroy dockets, and they take sides on cases and so on," says another resident, Cheryleen Fredericks. “Police are doing their job, they will continue doing their job.