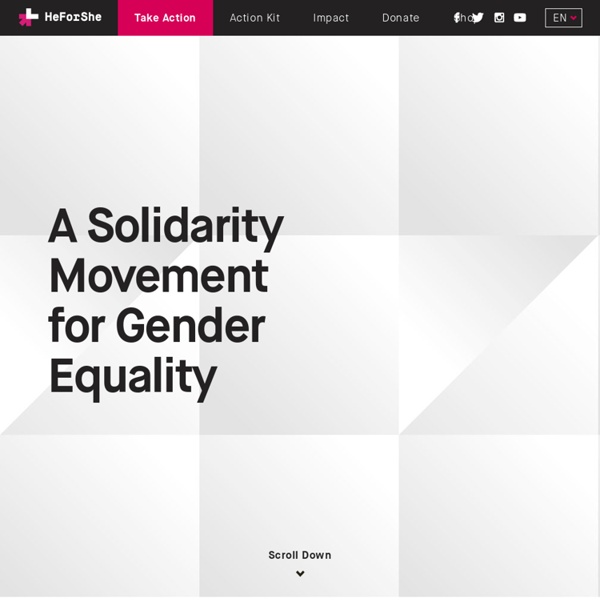 Video reveals how sexist ads urged women to start shaving their armpits in 1915 Women began shaving their armpits after Harper's Bazaar touted sleeveless dresses in the spring of 1915 Deodorant and shaving companies then began releasing ads with women sexily showing off their bare underarms in magazinesToday, some feminist women are embracing armpit hair again, growing out their underarm hair or dying it bright colors By Emily James For Dailymail.com Published: 21:34 GMT, 16 November 2015 | Updated: 23:13 GMT, 16 November 2015 Today, female body hair is mostly considered a no-no in American culture, with women shaving, waxing, and even using laser removal to make sure their skin is completely smooth. But of course, things weren't always this way.

5 Things We Learned For The HeForShe University Tour At ELLE we're huge advocates of the HeForShe campaign, which launched last year with UN Women and our former cover star Emma Watson. So when it was announced that UN Women was heading on the road to deliver the message of equality to university campuses we jumped at the chance to see change in action. The Get Free University Tour has been making its way across the UK and we caught up with it at LSE University, where actor Douglas Booth gave a keynote speech followed by a panel discussion on equality. Here are five things we learned from the afternoon. 1) Men are our partners in bringing about equality. Elizabeth Nyamayaro, the Senior Advisor to the Executive Director of UN Women and Head of the HeForShe Initiative opened the afternoon event with a reminder about what the HeForShe campaign is about and that is getting everyone, all genders, involved in the fight for equality.

How Maryland teens can get the sleep they need in spite of school schedules On school days, Rohan Parikh has the sunrise beat — by as much as two hours. The Severna Park teenager wakes at 4:45 on mornings he rides the bus to South River High School, where he's a student in the STEM Magnet program. On days his mother drives him, he wakes up at 5:30 a.m. "By the time I get to school, I'm a lot more awake," the 15-year-old said. "But I'm still not 100 percent." Antony's 'Future Feminism': Stage Banter As Statement Of Purpose : The Record "I've been thinking all day about the moon. Like, is it an accident that women menstruate once a month and that the moon comes once a month? Are other animals synchronized in this way with the moon? You know, my brother works in mental health and he says that there's a lot more hospitalizations and periods of activity during the full moon.

Stop using the ‘Woman of the Year’ award to put down Caitlyn When Caitlyn Jenner received Glamour magazine’s coveted ‘Woman of the Year’ award last month, many used it as an opportunity to list reasons why she should never have received it, as well as pointing out the many ways in which last week’s acceptance speech was problematic. One man, whose NYPD wife received the award posthumously after being killed in the attacks of 9/11, returned the award and criticised Jenner’s luxurious lifestyle in comparison to the trans youth he tried to help during his work as a police officer. Cult actor and feminist campaigner Rose McGowan was also unimpressed with Glamour’s choice, writing a long, since-deleted Facebook post calling out Jenner’s questionable acceptance speech revelation that “the hardest part of being a woman is figuring out what to wear”.

Earlier this week, Jennifer Lawrence wrote an essay for Lenny about the pay gap between the male and female stars of ​American Hustle​. Now fellow actors including Sienna Miller, Emma Watson and Bradley Cooper have come out in support. Watson tweeted her appreciation, writing, 'O Jennifer Lawrence I love you so.' J.Law's ​Hunger Games ​co-star Elizabeth Banks responded similarly, tweeting a link to the essay with the message, 'I love Jennifer Lawrence.' Advertising - The 10 Most Shazamed TV Ads Last Year The United States Navy had the most Shazamed television advertisement last year, according to a recent report from the audio identification app. The report relied on internal data from Shazam, a mobile application that recognizes music and other sounds from TV and other sources. The rankings were based on which songs/jingles from television commercials users identified most often in 2014.

Are drag queens doing enough for feminism? Drag queens often get a bad rep when it comes to being "good" feminists, with accusations that misogyny is rife within the gay male and drag communities. Words like “fishy” describe a queen who can pass as a biological woman, while gay culture is often critiqued for fetishizing masculinity above all else. Then you’ve got those who argue drag is just a parody of femininity, mocking women, both characteristics and the aesthetic; the butt of a joke made by men, in an arena that women often feel uninvited.