Another post about rape. By the by, I consistently use that title because I mean for it to operate as a trigger warning. 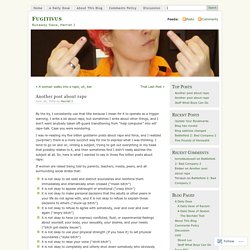 I write a lot about rape, but sometimes I write about other things, and I don’t want anybody taken off-guard transitioning from “help computer” into wtf rape-talk. On Sexual Assault and Healing. If I can’t write for myself, I’ll write for others. 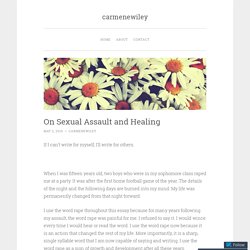 When I was fifteen years old, two boys who were in my sophomore class raped me at a party. It was after the first home football game of the year. The details of the night and the following days are burned into my mind. Criminal Law (Rape) (Amendment) Act, 1990, Section 2. I Never Called it Rape: Amazon.co.uk: Robin Warshaw. If you want insight into the difficult topic of sexual assault, Robin Warshaw's book is a terrific resource. 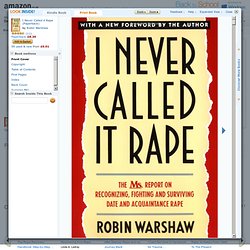 In clear, readable language, with numerous personal stories taken from the _Ms._ survey, she touches on the complex issues surrounding the phemomenon of "date rape. " Warshaw looks at the differences between this type of rape and assaults committed by strangers. She looks at fraternities, athletes, and teen victims. She examines the individual woman's response to an assault committed by a man she knows, as well as the response of universities, the police, and the courts. The law on sexual offences in Ireland. Rape The crime of rape may be charged under the Criminal Law (Rape) Act 1981 or the Criminal Law (Rape) (Amendment) Act 1990.

The circumstances of the case, age of the victim and evidence will decide which legislation will apply. The maximum penalty in Ireland for a rape offence is life imprisonment. There are related offences under the law of attempted rape, and separately of aiding and abetting a rape. Rape Crisis and Sexual Abuse Counselling Centre Sligo, Leitrim and West Cavan, listen and support for rape and sexual violence, sexual abuse children, sexual harassment at work, sexual violence support, Rape Crisis Network Ireland. Q. What is rape and sexual assault? Rape is an act of domination, anger and violence, which uses sexual penetration as a weapon. 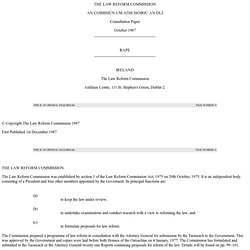 Stephen's Green, Dublin 2. © Copyright The Law Reform Commission 1987 First Published 1st December 1987 The Law Reform Commission was established by section 3 of the Law Reform Commission Act, 1975 on 20th October, 1975. The Commission prepared a programme of law reform in consultation with the Attorney General for submission by the Taoiseach to the Government. Is Helen Mirren right about date rape? - Crime - UK. Dame Helen's contention was that a woman who voluntarily ended up in a man's bedroom and engaged in sexual activity – but then said no to intercourse – could not seriously expect to take that man to court on a charge of rape if he ignored her last-minute insistence that she did not want full sex. 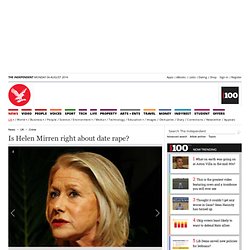 That had happened to her "a couple of times" 40 years ago when she was a budding actress. She had not reported the incidents to police because "you couldn't do that in those days". And perhaps, she suggested, that was not such a bad thing. Such views violate the current orthodoxy that, when it comes to sexual consent, no means no. The way we talk about rape and abuse is changing. How should we watch Annie Hall now? 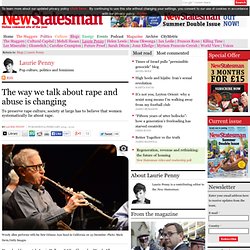 After filmmaker Woody Allen was given the Lifetime Achievement Award at the Golden Globes, his former foster-daughter, Dylan Farrow, now 28, told the New York Times the story of how he sexually abused her as a child. The charges against Allen are 20 years old, and were never brought to trial. Laurie Penny on rape culture and apologists. ‘‘It’s always sad to see young women become victims of sexual offences,” wrote Heather Keating, the head of Hastings Police, on her Twitter feed on the last day of 2012. 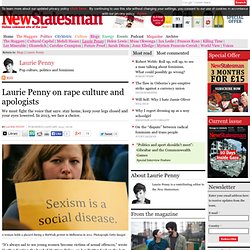 “Don’t Drink too much on New Years Eve [sic] and regret your actions!” There’s a slim chance she could have been talking to men, telling them not to get drunk and assault someone, but that’s not a message that law enforcement has yet managed to promote successfully in the 21st century. Sadly, Keating’s meaning was as clear as it was predictable: women should take responsibility for “protecting” themselves from sexual assault because sexual assault is just a fact of life. The Law of Rape in the UK and Ireland. Laurie Penny: It's nice to think that only evil men are rapists - that it's only pantomime villains with knives in alleyways. But the reality is different - Commentators - Voices. The people saying this are not all prize imbeciles like George Galloway or frothing wingnuts like the Republican Senate candidate Todd Akin. 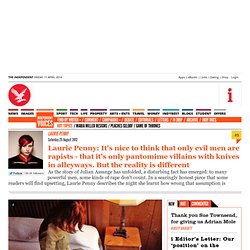 Some of them are just everyday internet idiots who happen to believe that if a man you have previously consented to sex with holds you down and fucks you, that isn't rape. If you were wearing a short skirt and flirting, that isn't rape. If a man penetrates you without a condom while you're asleep, against your will, that isn't rape, not, in Akin's words, "legitimate rape".

Old, white, powerful men know what rape is, much better, it seems, than rape victims. They are lining up to inform us that women – the discussion has centred around women and their lies even though 9 per cent of rape victims are men – do not need "to be asked prior to each insertion". Mia's Story. As soon as Mia asked Dylan about it, Dylan began to tell a harrowing story, in dribs and drabs but in excruciating detail. 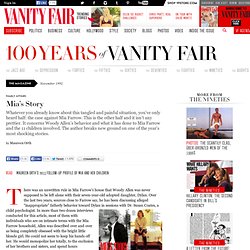 According to her account, she and Daddy went to the attic (not really an attic, just a small crawl space off the closet of Mia’s bedroom where the children play), and Daddy told her that if she stayed very still he would put her in his movie and take her to Paris. An Open Letter From Dylan Farrow. Frances SilverDylan Farrow (A note from Nicholas Kristof: In 1993, accusations that Woody Allen had abused his adoptive daughter, Dylan Farrow, filled the headlines, part of a sensational story about the celebrity split between Allen and his girlfriend, Mia Farrow. This is a case that has been written about endlessly, but this is the first time that Dylan Farrow herself has written about it in public. 10 Ways To Talk To Your Kids About Sexual Abuse — Everyday Feminism.

"Where's My Cut?": On Unpaid Emotional Labor. Jess Zimmerman’s previous work for The Toast can be found here. I am not a big fan of psychic charlatanry, which often preys on people who are in genuine grief. So when I read about psychic fraud Priscilla Kelly Delmaro, arrested in May for second-degree grand larceny, I should have felt smug about her downfall. 21 Facts That Will Change The Way You Think About Sexual Assault. Here's What Happened When 33 Women Were Asked To Respond To The Words ‘She Was Asking For It’ By Joseph Lamour 8/7/2015 In a world where everyone disagrees on everything (including whether or not Donald Trump should become the next president), there’s one thing we all have see eye to eye on: A woman is never “asking for it.”

In a compelling new video released by The Cut, women ages 18-50 are asked to react to the phrase “she was asking for it.” The women interviewed unanimously disagree with the common excuse to explain away rape by placing the blame on the victim. “Not true,” says Alexa, one of the women in the video. What's It Like To Become A Mattress-Carrying Voice For Rape Survivors? We Asked. By Brenna Ehrlich 9/4/2014 UPDATE: Columbia University sent a statement after the publication of this story.

It was added at the bottom of the page at 3:48 p.m. EST. The majority of rapes go unreported to the police — 60% according to the Rape, Abuse & Incest National Network. 35 Bill Cosby Accusers Tell Their Stories. More has changed in the past few years for women who allege rape than in all the decades since the women’s movement began. Welcome to End Violence Against Women International. How To Help A Friend Who Has Been Sexually Assaulted. (Content Warning: Rape and Rape Culture)

The Salvation Army Put A Model In "The Dress" For A Domestic Violence Advert - BuzzFeed News. The Science of Why No One Agrees on the Color of This Dress. Not since Monica Lewinsky was a White House intern has one blue dress been the source of so much consternation. (And yes, it’s blue.) 16 Days of Action Opposing Violence Against Women » Our Campaigns » Women's Aid - Domestic violence service in Ireland. 25th November to 10th December 2014 Use this section for information and resources as you plan your campaign actions for 2014.

Check out this site regularly for information on the Women's Aid 'One in Five Women' Campaign, the National Balloon Action and background information about the campaign. New campaign materials and information for 2014 will be added throughout October and November. This section also includes a campaign resources section which includes the Women's Aid 16 Days Newsletter and links to national and international statistics, research, other downloadable campaign, tools and media resources. Our 16 Days blog is live for the 2014 campaign from mid-October and has up to date information on events taking place nationwide and it will feature accounts from event organisers throughout the country as well as messages of support from well known figures from Irish public life.