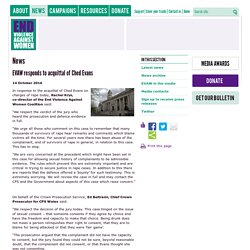 "We urge all those who comment on this case to remember that many thousands of survivors of rape hear remarks and comments which blame victims all the time. For several years now there has been abuse of the complainant, and of survivors of rape in general, in relation to this case. This has to stop. "We are very concerned at the precedent which might have been set in this case for allowing sexual history of complainants to be admissible evidence.

On behalf of the Crown Prosecution Service, Ed Beltrami, Chief Crown Prosecutor for CPS Wales said: “We respect the decision of the jury today. “I would like to thank the complainant for her courage throughout this case, and the previous trial.” X Factor's axed Josh Brooks finally admits beating up ex-girlfriend in vicious attacks. X Factor's Josh Brooks, who forms one half of Brooks Way, has finally admitted he attacked his ex-girlfriend. 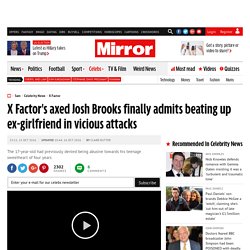 Brooks Way left the ITV show in a 'mutual' decision after the allegations emerged that he broke his ex Amelia Clarke's nose during an attack Now the 17-year-old has publicly apologised - and wants to get professional help for his conduct. Josh, whose twin brother Kyle forms the other half of the band, has described his four-year relationship with Amelia as “really volatile and toxic”. A week ago Josh adamantly denied that he had physically beaten his girlfriend and left her with a broken nose, despite horrific photos Amelia claims were of the injuries sustained at the hands of her former boyfriend emerged.

Facebook Syco / Thames / Dymond It was also claimed that Josh boasted in messages that he had the support of the X Factor team and that they would shield him in the media storm. Now speaking to The Sun on Sunday, the teen said: “From the bottom of my heart, I am really, really sorry. Battered woman defense - Wikipedia. The battered woman defense is a defense used in court that the person accused of an assault/murder was suffering from battered person syndrome at the material time. 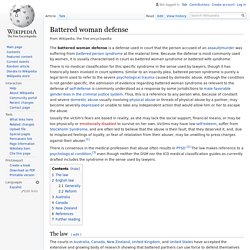 Because the defense is most commonly used by women, it is usually characterised in court as battered woman syndrome or battered wife syndrome. Usually the victim's fears are based in reality, as she may lack the social support, financial means, or may be too physically or emotionally disabled to survive on her own. Victims may have low self-esteem, suffer from Stockholm Syndrome, and are often led to believe that the abuse is their fault, that they deserved it, and, due to misplaced feelings of loyalty, or fear of retaliation from their abuser, may be unwilling to press charges against their abuser.[1] The law[edit] English law[edit] Generally[edit] In R v Ahluwalia (1992) 4 AER 889 a battered wife killed her violent and abusive husband. Reform[edit] Australia[edit] Canada[edit] In 1911 in Sault Ste. New Zealand[edit] At Least A Third Of All Women Murdered In The U.S. Are Killed By Male Partners.

Male violence is the worst problem in the world. I guess I’m a man-hater, writing a title like that, using my keypad to fire a shot across the bow of an entire gender. 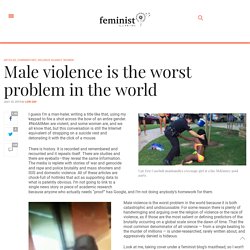 #NotAllMen are violent, and some women are, and we all know that, but this conversation is still the Internet equivalent of strapping on a suicide vest and detonating it with the click of a mouse. There is history. It is recorded and remembered and recounted and it repeats itself. There are studies and there are eyeballs—they reveal the same information. The media is replete with stories of war and genocide and rape and police brutality and mass shooters and ISIS and domestic violence.

Male violence is the worst problem in the world because it is both catastrophic and undiscussable. Look at me, taking cover under a feminist blog’s masthead, so I won’t be ripped apart by unmoderated male commenters on the vast digital ocean, bleeding out for a circling, hungry man mob. I once read that when we mention “male-pattern baldness,” no one screams, “But not all men are bald!”