I worked on the US drone program. The public should know what really goes on 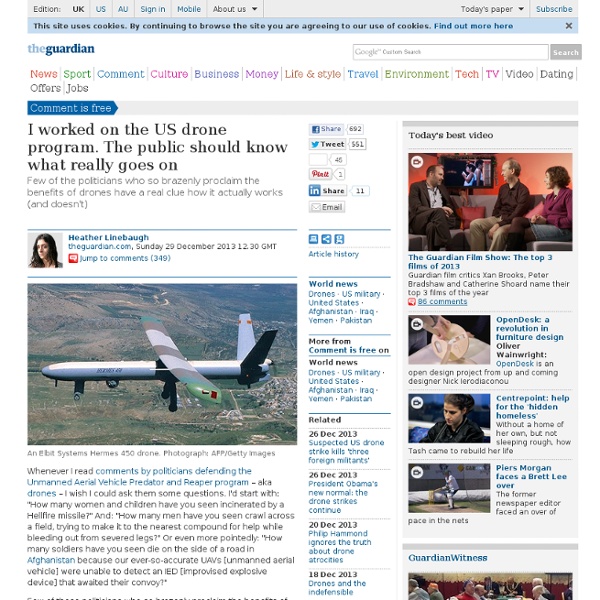 Whenever I read comments by politicians defending the Unmanned Aerial Vehicle Predator and Reaper program – aka drones – I wish I could ask them a few questions. I'd start with: "How many women and children have you seen incinerated by a Hellfire missile?" And: "How many men have you seen crawl across a field, trying to make it to the nearest compound for help while bleeding out from severed legs?" Or even more pointedly: "How many soldiers have you seen die on the side of a road in Afghanistan because our ever-so-accurate UAVs [unmanned aerial vehicles] were unable to detect an IED [improvised explosive device] that awaited their convoy?" Few of these politicians who so brazenly proclaim the benefits of drones have a real clue of what actually goes on. I, on the other hand, have seen these awful sights first hand. I knew the names of some of the young soldiers I saw bleed to death on the side of a road. Related:  Air

U.S. Air Force Testing New Stealth Drone at Area 51 Update on the global drone arms race.Nicholas WestActivist Post It has been predicted that the development of drone surveillance by the U.S. would spark a global race to develop new drone capabilities, leading to a potentially dystopian future of drone wars where combat and even assassinations can be performed by fleets of insect-like microbots. The Washington Post reported in July, 2011: More than 50 countries have purchased surveillance drones, and many have started in-country development programs for armed versions because no nation is exporting weaponized drones beyond a handful of sales between the United States and its closest allies. The number of countries has now risen toward 90 as Pakistan recently entered into the market, plus the United Nations itself has launched its own fleet of surveillance drones. Perhaps to keep up with an announcement that the U.S. First test flight footage: The race is on to capitalize on the surge in the drone market around the world.

Military Urban Operations Training: "Blacked-out" Helicopters Reported in Several Cities Chris CarringtonActivist Post Military training exercises are being conducted over a wide area of the United States. Phoenix, Los Angeles and Dallas news stations were inundated with calls about "blacked-out" helicopters flying low over the cities. In Phoenix eyewitnesses said the pilots flew their craft very close to buildings, weaving between them just a few hundred feet above the sidewalks. The Department of Homeland security is stepping up ‘urban warfare’ training, but it’s unclear at this point if the training is because they fear an attack from outside the country, or if they are practicing these maneuvers so they can control American citizens should the need arise. Chris Carrington is a writer, researcher and lecturer with a background in science, technology and environmental studies. If you enjoy our work, please donate to keep our website going.

Texas Students Hijack US Military Drone in Mid Air When the Department of Homeland security makes bets with the civilian population, perhaps they shouldn’t offer college students $1000. In Austin, Texas, College students said they would take that bet and they did. Texas College Students hijacked a US Military Predator Drone in mid-air in front of DHS!The University of Texas came into it saying that they not only could do it, but that it had been done before. We have seen the reports from Iran that they used a technique to do what they call “spoofing” to bring down a RQ-170 spy plane of the United States and put it on Display. When the US Government and DHS put up the challenge to see if it could be done for less than $1000 to prove it was false, I guess they had forgotten what we in Texas call “Red Neck Ingenuity”. From Popular Science and RT: A group of researchers led by Professor Todd Humphreys from the University of Texas at Austin Radio navigation Laboratory recently succeeded in raising the eyebrows of the US government.

Discovery Channel Strange planes Drones, midgets and parasites Strange Aircraft 2 Strange Aircraft 3 Strange But Real Aircraft Planes that u had never seen Lockheed Martin's first 6th gen fighter concept "Miss February". Air Force pursuing antimatter weapons / Program was touted publicly, then came official gag order The U.S. Air Force is quietly spending millions of dollars investigating ways to use a radical power source -- antimatter, the eerie "mirror" of ordinary matter -- in future weapons. The most powerful potential energy source presently thought to be available to humanity, antimatter is a term normally heard in science-fiction films and TV shows, whose heroes fly "antimatter-powered spaceships" and do battle with "antimatter guns." But antimatter itself isn't fiction; it actually exists and has been intensively studied by physicists since the 1930s. During the Cold War, the Air Force funded numerous scientific studies of the basic physics of antimatter. More cataclysmic possible uses include a new generation of super weapons -- either pure antimatter bombs or antimatter-triggered nuclear weapons; the former wouldn't emit radioactive fallout. In that talk, Edwards discussed the potential uses of a type of antimatter called positrons. Why so far off?

US missile defense system proves to be useless after $40 bln spent Published time: June 17, 2014 16:52 This US Air Force handout photo shows a Ground-based Interceptor, an element of the overall Ground-based Midcourse Defense system (AFP Photo) Despite a decade of testing and tens of billions of dollars’ worth of research, a major missile defense program in the United States has proven to be anything but successful, a new investigation suggests. Nevertheless, the Missile Defense Agency, or MDA, plans on conducting next week its ninth exercise of that costly system since 2004, and the outcome of the drill is expected to influence whether or not more than a dozen new interceptors are added to the United States’ arsenal. According to a recent investigation by the Los Angeles Times, however, that system has so far been marred by mistakes that raise questions about its ability to thwart any major attack and the cost incurred during the last decade. “Official pronouncements about the GMD system, The Times found, have overstated its reliability.”

Black Knight | Alex Collier by Alex Collier dot org on Friday, November 21st, 2014 | 86 Comments We have received a new message from Alex Collier: This is information I was given to me regarding the Black Knight Satellite that is seen at times in our orbit. Referred to as ”BK“ from now on. Alex Collier According to the A’s The Body of the “BK” is made of grown and manufactured alloys and Meteor metals. In earth years, its said to be well over 10,833 years old. The ”BK” in our systems is powered by a cognitive fluid that is black in color and has DNA markers of its owners. The A’s have said the” BK” devices are scattered throughout the galaxy and, have been in operation for many, many thousands of years. It is near impossible to capture one of these” BK” as they have intercept and avoidance defense systems that are highly evolved. I was told that the data from all of the satellites is used to update star charts and life analysis for specific races passing through or traveling throughout the galaxy. Alex

Mini Exploding ''Bee'' Drones Developed to Support Army Nicholas WestActivist Post Micro Air Vehicles have long been researched by the military for use in both surveillance and lethal targeting missions. An Air Force video released in early 2013 offered a vision of insect-sized drone swarms that could autonomously fly and communicate to fulfill their mission, using existing power sources to harness energy and remain "hidden in plain sight." A new video (posted below) from two Polish defense contractors, WB Electronics and Optimum, indicates the increasing miniaturization of drone technology as they continue along the path toward achieving the above-mentioned near-invisibility. The new system, which has been primarily designed to support infantry soldiers entering hostile areas, has been designed both for surveillance and lethality. As reported by Reuters: The system, called 'Bee', can be configured to fit a number of the small-sized drones on to a military vehicle, such as the Rosomak (Polish for 'Wolverine') armored personnel carrier (APC).