Predator Empire: The Geopolitics of U.S. Drone Warfare. This is a pre-corrected version . 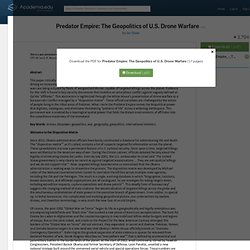 FULL VERSION: AS: Ian G. R. A changing drone campaign: US covert actions in 2013. 2013 saw fewer drone strikes than previous years (Photo: US Air Force/Airman 1st Class Jason Epley) In 2013 the number of drone strikes to hit Pakistan fell to the lowest levels of Obama’s presidency: 27 strikes reportedly hit the country’s tribal areas, down from a peak of 128 in 2010. 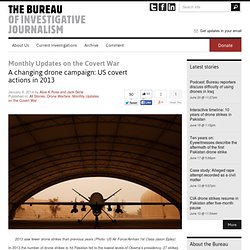 And for the first time since Pakistan strikes started in 2004, there were no confirmed reports of civilian casualties. The changes reflected growing opposition from within Pakistan, as both the political and military elites were publicly critical of the strikes. The Obama administration continued 2012′s trend of limited transparency around drone strikes In Yemen, by contrast, at least 11 civilians including 4 children died in confirmed drone attacks.

In Somalia, al Shabaab, an ally of al Qaeda, regrouped after heavy defeats in 2012 and continued launching attacks. Cyberwarfare military technology. A recent report of a U.S. surveillance drone flying over the Crimea region of Ukraine being hacked by Russian forces, is just one of many indication that the twenty-first-century global battlefield will take place in cyberspace. 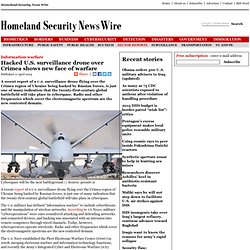 Radio and other frequencies which cover the electromagnetic spectrum are the new contested domain. Chemical and Biological Weapons Status at a Glance. Press Contact: Tom Z. 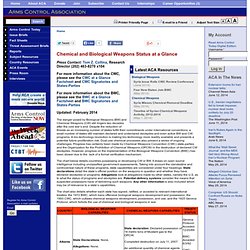 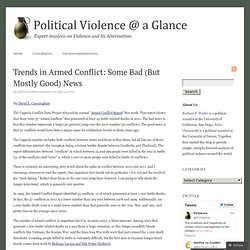 Cunningham The Uppsala Conflict Data Project released its annual “Armed Conflict Report” this week. That report shows that there were 37 “armed conflicts” that generated at least 25 battle-related deaths in 2011. The bad news is that this number represents a large (20 percent) jump over the 2010 number (31 conflicts). The good news is that 37 conflicts would have been a major cause for celebration twenty or thirty years ago. "Armed Conflict: Trends and Drivers" Trends in Armed Conflict: Some Bad (But Mostly Good) News. Global Trends in Armed Conflict - PRIO. Trends in armed conflicts. Armed Conflict Database. 16 Maps Of Drug Flow Into The United States - Business Insider#ixzz26yNJzQlN. Taking stock of the chemical weapon ban. On 20–21 March the University of Rome III hosted a roundtable discussion to reflect on the current status of the prohibition on chemical weapons (CW) and the future challenges to that ban. 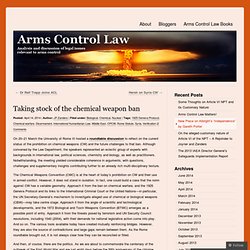 Although convened by the Law Department, the speakers represented an eclectic group of experts with backgrounds in international law, political sciences, chemistry and biology, as well as practitioners. Notwithstanding, the meeting yielded considerable coherence in arguments, with questions, challenges and supplementary insights contributing further to an already rich multi-disciplinary texture. The Chemical Weapons Convention (CWC) is at the heart of today’s prohibition on CW and their use in armed conflict. However, it does not stand in isolation. In fact, one could build a case that the norm against CW has a variable geometry. And then, of course, there are the politics. Chemical Arms: Third World Trend. Libya's reported attempt to join the chemical weapons club is the latest example of a trend in the Middle East and Asia that appears to have tripled the number of countries possessing such weapons in the last decade. 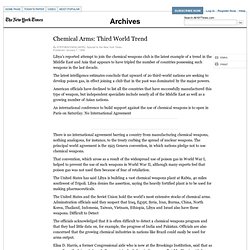 The latest intelligence estimates conclude that upward of 20 third-world nations are seeking to develop poison gas, in effect joining a club that in the past was dominated by the major powers. American officials have declined to list all the countries that have successfully manufactured this type of weapon, but independent specialists include nearly all of the Middle East as well as a growing number of Asian nations. An international conference to build support against the use of chemical weapons is to open in Paris on Saturday. No International Agreement. Threat of Terrorist IEDs Growing, Expanding, General Says.

Threat of Terrorist IEDs Growing, Expanding, General Says By Jim GaramoneAmerican Forces Press Service WASHINGTON, Sept. 21, 2012 – The threat posed by crude homemade bombs known as improvised explosive devices is growing and spreading across the globe, and will be the terrorists’ weapon of choice for decades, the commander of the Joint Improvised Explosive Device Defeat Organization said yesterday. 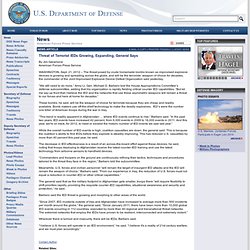 “We still need to do more,” Army Lt. Gen. Michael D. These bombs, he said, will be the weapon of choice for terrorists because they are cheap and readily available. Nuclear Spread and World Order. Until a year or two ago we were entitled to believe that the Nuclear Nonproliferation Treaty (NPT) could successfully hold the line at five nuclear weapons powers, if only a few holdout countries would sign or ratify it. 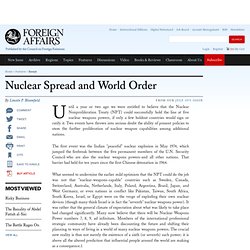 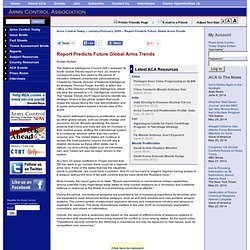 Chaired by Deputy Director of National Intelligence for Analysis Thomas Fingar, the NIC is within the Office of the Director of National Intelligence, which sits atop the sprawling U.S. intelligence community. The "Global Trends 2025" report aims to identify key strategic drivers in the global system that could shape the issues facing the new administration and to guide policymakers toward a broad view of the world. The report addressed weapons proliferation as well as other global issues, such as climate change and economic trends. NPEC - How to Resist the Spread of Nuclear Weapons. If current trends continue, in a decade or less, the United Kingdom could find its nuclear forces eclipsed not only by those of Pakistan, but of Israel and India as well. Shortly thereafter, France could share the same fate.

China, which has already amassed enough separated plutonium and highly enriched uranium to easily triple its current stockpile of roughly 300 deployed nuclear warheads, also is likely to increase its deployed numbers, quietly, during the coming years.1 Meanwhile, over 25 states have announced their desire to build a large nuclear reactor — a key aspect of most previous nuclear weapons programs — before 2030.

None of these trends should be welcome to those who favor the abolition of nuclear weapons. Indeed, unless these negative trends are restrained and reversed, nuclear weapons reductions in the U.S. and even Russia may not be enough to reduce continuing nuclear rivalries and could actually intensify them. Weapons of Mass Destruction. Prepared by Laura Reed, Security Studies Program, MIT, Cambridge, MA, USA The dangers posed by weapons of mass destruction have come to occupy center stage in international politics.

I have been asked to respond to two questions: First, how effective is our present "engagement" policy toward China; second, is the executive branch implementing the U.S. law concerning sanctions? I think that the evidence is now clear on both questions. The administration's engagement policy has run out of gas--it is no longer achieving anything significant. The process is essentially dead. Since 1994, our ambassadors have gone to China, they have held out engagement rings, and the Chinese have shut the door in their faces. Major Conventional Weapons: Their Global Spread and the Links to War, WMD and Military Spending. Changing attitudes to Africa’s declining coups. I was quite intrigued when a senior French diplomat Stephane Gompertz revealed on a recent trip to LSE that his government had made subtle changes to the way they deal with regimes that seize power by force. It got me thinking about the decline of coup d’états in Africa and the possible reasons.

I first heard the word coup d’état at age eight on the BBC World Service. It was 1982 and Hissene Habre had just seized power in Chad. Terrorism and Political Violence in Africa: Contemporary Trends in a Shifting Terrain. Conflict trends (no. 25): Real-time analysis of African political violence, April 2014 - World. Conflict Trends Reports. ACLED Conflict Trends reports are monthly updates on political violence and conflict events in African states. They are based on real-time data, and compare current trends and patterns to historical dynamics in key focus countries. ACCORD - Conflict Trends. ACCORD - CONFLICT TRENDS ISSUES. Mexican Drug War Statistics. Mexico's Drug War. Introduction In 2006, former Mexican president Felipe Calderón, in conjunction with the United States, launched a massive crackdown against drug trafficking organizations, escalating a conflict that would contribute to the deaths of tens of thousands of people in drug-related violence.

While the United States has supplied funding and intelligence to increase Mexico's institutional capacity to address drug trafficking, its primary focus has been on stanching the flow of drugs into the country and domestic law enforcement. Analysts differ on how to address Mexico's festering internal strife, but a growing number agree that the U.S. war on drugs is a failure and necessitates a new approach. Enrique Peña Nieto, who succeeded Calderón as president in December 2012, has tried to reframe Mexico's image as an investment hotspot while emphasizing a strategy to quell violence against civilians. Mexico's Drug Trafficking Mexico’s War Effort Under Calderón Escalating Violence. The War On Drugs At A Glance. There is a drug arrest every 19 seconds in the U.S.