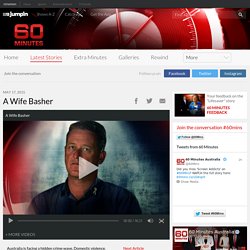 Domestic violence. One Australian woman is being killed every week, and those who survive are left with the most horrible physical and psychological scars. As a community we’ve only scratched the surface of the shame and secrecy surrounding this vile scourge. Some brave women have found the strength to speak out about their abuse, but too often the gutless perpetrators of domestic violence, either kill themselves or run a mile, before they can be held to account. Not this Sunday. Reporter: Tara Brown Producers: Gareth Harvey, Grace Tobin · If you or somebody you know is in immediate danger, call ​000 now · Safe Steps is a 24 hour family violence response centre. . · Lifeline provides all Australians with access to 24 hour crisis support & suicide prevention services. . · Mensline Australia supports men and boys who are dealing with family and relationship difficulties. Three days in a refuge. Updated Introduction "I told him we were going to the library, I took Georgia's bottle and the library books and we never came back. 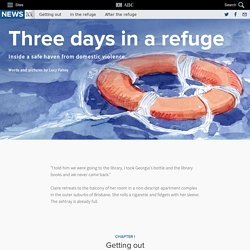 " Claire retreats to the balcony of her room in a non-descript apartment complex in the outer suburbs of Brisbane. She rolls a cigarette and fidgets with her sleeve. The ashtray is already full. Getting out Claire's quiet apartment in the Chisolm refuge, a sanctuary for women escaping violent relationships, feels a world away from the chaotic household she describes. "He'd pull me to the ground and strangle me, he'd get on top of me and strangle me. "Before I met Jack, I thought 'why do people stay, like just walk out'. " "The first time where I went 'something was wrong here' was four or five months into the relationship," she says. "He just woke up, freaked out and smashed my phone, and then he put me on a phone plan under his name ... but that was sort of another control.

"He'd know all my passwords, for Facebook, email, my bank account. Domestic and Family Violence - Briefing Paper 05/2015 dated 05/05/2015. Domestic violence: How does a magistrate decide who needs protection? Updated Introduction Outside the doors of a special domestic violence court you could spend a lot of time trying to guess the relationships between people in the foyer. 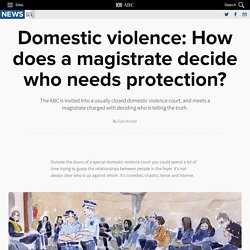 It's not always clear who is up against whom. It's crowded, chaotic; tense and intense. The people here are not just women taking out orders against their boyfriends and husbands; all sorts of relationships are represented. These are civil court matters but disobeying the orders can quickly cross the line into criminal offences with the possibility of jail time. People generally come here to seek court orders for no contact - physical, telephonic or written - or to enforce good behaviour towards each other. There are strict rules around how the media can report on domestic and family violence. Outside, the social worker is congratulating her, but not far away, so too is his legal team congratulating him. A man intimidates a woman in the foyer but then when they enter the courtroom, the behaviour changes. Counter orders. Video evidence for domestic violence victims a 'game changer' says Andrew Scipione. 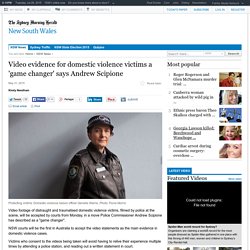 Photo: Fiona Morris Video footage of distraught and traumatised domestic violence victims, filmed by police at the scene, will be accepted by courts from Monday, in a move Police Commissioner Andrew Scipione has described as a "game changer". NSW courts will be the first in Australia to accept the video statements as the main evidence in domestic violence cases. Victims who consent to the videos being taken will avoid having to relive their experience multiple times by attending a police station, and reading out a written statement in court. "Never before has a victim of domestic abuse been able to articulate in court the detail and the raw emotion of an incident as clearly as when it happened" Andrew Scipione. It is hoped the move will significantly increase guilty pleas by perpetrators, and reduce the number of victims withdrawing from cases. "It is likely to take them back to the scene, in a very real way. 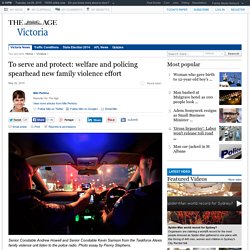 Photo essay by Penny Stephens. When Jeff was released from prison recently he called Sarah 700 times in a fortnight. Last week it was 500 metres. A few days later, it was 200 metres. Then one morning Sarah's phone gave another shrill beep. The online dating app she used to meet her ex-boyfriend can still track his movements via his profile. And it showed her abusive former partner was now only 50 metres away from the tiny flat she shares with her two children. He was out there somewhere, on this nondescript Moorabbin street in suburban Melbourne. "I was so terrified, I could hardly breathe," she says in husky voice, gripping her throat with one hand while she talks.

In her stamp-sized, smoky living room there is a telly in one corner, a sofa in the other, and just enough space to walk between both.