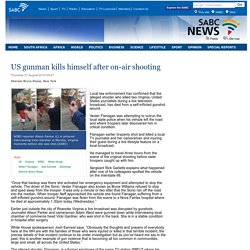 (SABC) Local law enforcement has confirmed that the alleged shooter who killed two Virginia, United States journalists during a live television broadcast, has died from a self-inflicted gunshot wound. Vester Flanagan was attempting to outrun the local state police when his vehicle left the road and where troopers later discovered him in critical condition. Flanagan earlier brazenly shot and killed a local TV journalist and her cameraman and injuring their guest during a live lifestyle feature on a local broadcast. He managed to travel three hours from the scene of the original shooting before state troopers caught up with him. Sergeant Rick Garletts explains what happened after one of his colleagues spotted the vehicle on the Interstate 66.

“Once that backup was there she activated her emergency equipment and attempted to stop the vehicle. US shooting suspect in police custody:Friday 19 June 2015. Twenty one-year-old Dylann Roof was apprehended about 260km away in the town of Shelby in neighbouring North Carolina. 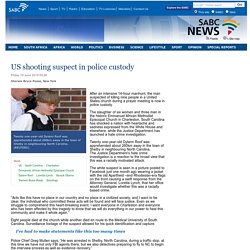 (REUTERS) After an intensive 14-hour manhunt, the man suspected of killing nine people in a United States church during a prayer meeting is now in police custody. The slaughter of six women and three men in the historic Emmanuel African Methodist Episcopal Church in Charleston, South Carolina has shocked a nation with heartache and sadness expressed from the White House and elsewhere, while the Justice Department has launched a hate crime investigation. Twenty one-year-old Dylann Roof was apprehended about 260km away in the town of Shelby in neighbouring North Carolina. The Justice Department’s hate crime investigation is a reaction to the broad view that this was a racially motivated attack.

Gunman kills 6 in rampage in California college town:Sunday 25 May 2014. Biden urges Democrats to comply with demands to curb US gun violence:Thursday 7 February 2013. U.S. 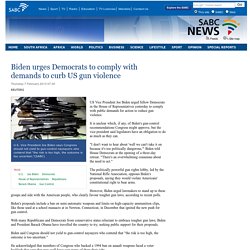 Vice President Joe Biden says Congress should not yield to gun-control naysayers who contend that "the risk is too high, the outcome is too uncertain. "(SABC) US Vice President Joe Biden urged fellow Democrats in the House of Representatives yesterday to comply with public demands for action to reduce gun violence. It is unclear which, if any, of Biden's gun-control recommendations Congress might approve, but the vice president said legislators have an obligation to do as much as they can.

"I don't want to hear about 'well we can't take it on because it's too politically dangerous,'" Biden told House Democrats at the opening of a three-day retreat. The politically powerful gun rights lobby, led by the National Rifle Association, opposes Biden's proposals, saying they would violate Americans' constitutional right to bear arms. However, Biden urged lawmakers to stand up to these groups and side with the American people, who clearly favour tougher gun laws, according to recent polls. Biden eyeing technology in gun violence fight :Saturday 12 January 2013. 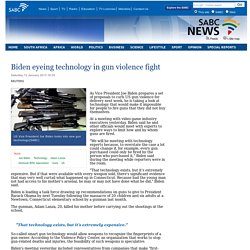 At a meeting with video game industry executives yesterday, Biden said he and other officials would meet with experts to explore ways to limit how and by whom guns are fired. "We will be meeting with technology experts because, to overstate the case a lot could change if, for example, every gun purchased could only be fired by the person who purchased it," Biden said during the meeting while reporters were in the room. "That technology exists, but it's extremely expensive.

But if that were available with every weapon sold, there's significant evidence that may very well curtail what happened up in Connecticut. The gunman, Adam Lanza, 20, killed his mother before carrying out the shootings at the school. US cinema shooter formally charged with murder:Tuesday 31 July 2012. James Holmes faces 24 counts of first-degree murder and 116 counts of attempted murder. 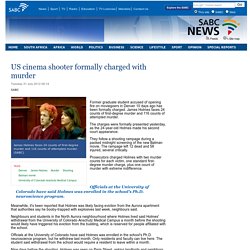 (SABC) Former graduate student accused of opening fire on moviegoers in Denver 10 days ago has been formally charged. James Holmes faces 24 counts of first-degree murder and 116 counts of attempted murder. The charges were formally presented yesterday, as the 24-year-old Holmes made his second court appearance. They follow a shooting rampage during a packed midnight screening of the new Batman movie. Prosecutors charged Holmes with two murder counts for each victim, one standard first-degree murder charge, plus one count of murder with extreme indifference. Officials at the University of Colorado have said Holmes was enrolled in the school's Ph.D. neuroscience program. Obama pledges effort to reduce US gun violence at memorial:Monday 17 December 2012. President Barack Obama(REUTERS) President Barack Obama, speaking at a memorial service for the victims of a mass shooting at a Connecticut elementary school, said yesterday that the United States was not doing enough to protect its children and pledged to launch an effort to reduce violence. 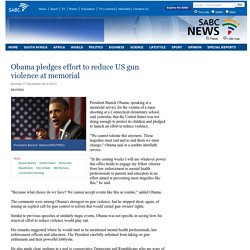 "We cannot tolerate this anymore. These tragedies must end and to end them we must change," Obama said at a sombre interfaith service. "In the coming weeks I will use whatever power this office holds to engage my fellow citizens from law enforcement to mental health professionals to parents and educators in an effort aimed at preventing more tragedies like this," he said. "Because what choice do we have? The comments were among Obama's strongest on gun violence, but he stopped short, again, of issuing an explicit call for gun control or reform that would curtail gun owners' rights.

"We will be told that the causes of such violence will be complex and that is true. His remarks yesterday echoed that call.