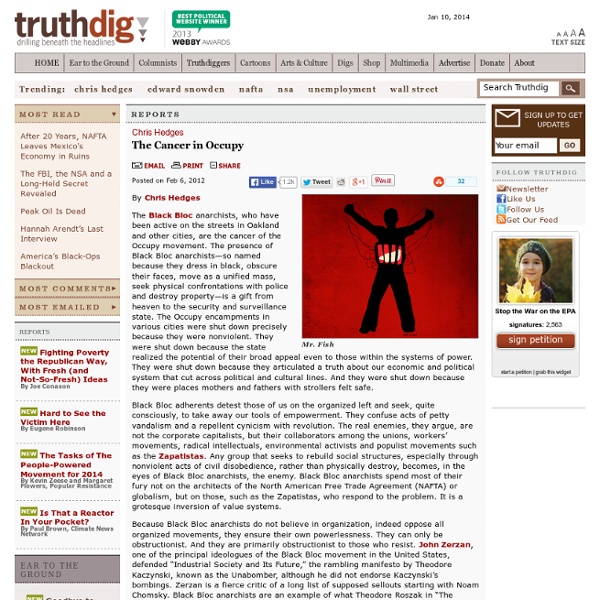 The Cancer in Occupy Posted on Feb 6, 2012 By Chris Hedges The Black Bloc anarchists, who have been active on the streets in Oakland and other cities, are the cancer of the Occupy movement. Black Bloc adherents detest those of us on the organized left and seek, quite consciously, to take away our tools of empowerment. Because Black Bloc anarchists do not believe in organization, indeed oppose all organized movements, they ensure their own powerlessness. In Zerzan’s now defunct magazine Green Anarchy (which survives as a website) he published an article by someone named “Venomous Butterfly” that excoriated the Zapatista Army for National Liberation (EZLN). “Of course,” the article went on, “the social struggles of exploited and oppressed people cannot be expected to conform to some abstract anarchist ideal. Solidarity becomes the hijacking or destruction of competing movements, which is exactly what the Black Bloc contingents are attempting to do with the Occupy movement.

New Rules for Radicals: Ten Ways to Spark Change in a Post-Occupy World The first rule is this: The world is different now. The rules have changed. Since Occupy, we all understand this. Nothing works now the way it did even just a couple of years ago. What’s going on is that we are (finally!) The reasons for this shift are complex and wonky, and are the stuff of other articles. As a Silicon Valley brat-turned-futurist, I’ve spent a lot of my life in a culture that churned constantly with this kind of upending, unending change. So, with that, we are already on to Rule Two, which is really the most important one: As the world rises up against economic injustice, Truthout brings you the latest news and analysis, free of corporate influence. 2. Anger is useful. So: let’s drop that cool, cynical, I’ve-seen-it-all, let’s-not-get-too-excited-here stance. 3. Because I have no idea what will work now, what we can ask for or expect, or where the boundaries of this new landscape lie. But apart from that: Go. 4. That’s our vision, and we’re sticking to it. 5. 6. 7. 8.

Why #OWS Needs to Denounce Violent Tactics on Display at Occupy Oakland | Occupy Wall Street January 31, 2012 | Like this article? Join our email list: Stay up to date with the latest headlines via email. The Occupy Movement, “the 99 percent,” has, ironically, been hijacked by a small minority within its ranks. These are Black Bloc tactics and they're historically ineffective at spurring change. Here’s the key point: Occupy is not an armed conflict – it’s a PR war. At some General Assemblies this issue is referred to as “diversity of tactics.” Violent tactics taint everyone involved evenly – consenting or not. Property destruction is not only a bad PR move (it costs taxpayers and small business owners money) it’s not constitutionally protected Free Speech. Moreover the destruction of property is exactly what Occupy is protesting against; it’s what the banks took from us. Destroying property destroys moral authority. Occupy should denounce violence and property damage.

The Numbers Are In: Find Out Just How Many Americans Have Ditched Their Banks untitled PEACE AND FIRE: Diversity of Tactics in the Egyptian Revolution “The idea of a peaceful revolution is a bit of a myth. We like to tell ourselves that nonviolent protest did the job, but there was a heck of a lot of violence, too” - Blake Hounsell, editor at Foreign Policy, quoted in the New York Times Lege blog, June 30, 2011 “yo spain egyptian people want to share a secret with u, peaceful revolt is for tv, real revolutionaries beat the hell out of police” - tweet from Alaa Abd El Fattah, dissident Egyptian blogger, 10:21pm, May 27, 2011 (1) On February 1st, Human Rights Watch emergency director Peter Bouckaert presented evidence of “several cases” where undercover police were among the looters who attacked the National Museum during the first week of Egypt’s 2011 revolution. Bouckaert might have been correct as far as the National Museum looting goes. 'The struggle to ouster Hosni Mubarak was an overwhelmingly nonviolent one. That night, the occupation of Tahrir Square commenced.