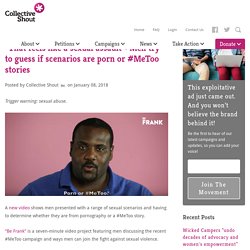 A new video shows men presented with a range of sexual scenarios and having to determine whether they are from pornography or a #MeToo story. “Be Frank” is a seven-minute video project featuring men discussing the recent #MeToo campaign and ways men can join the fight against sexual violence. The men are visibly uncomfortable as they read aloud certain scenarios, including the following (*trigger warning*): “I came home late from a party. My step-dad was waiting in the kitchen. The men struggle to distinguish porn scripts from real sexual assault situations. NPR Choice page. Eu.usatoday. SNL’s women take on sexual misconduct with ‘Welcome to Hell’ music video. Tarana Burke was omitted from the TIME Magazine cover, so let’s celebrate the sh*t out of her today!

A Black woman creates something, and white people credit themselves for it, after ignoring it for as long as possible. 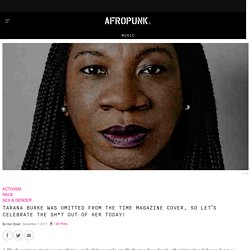 Where have we heard this before? The latest unsurprising example of appropriating Black labor is in the case of TIME Magazine, which recently chose “The Silence Breakers” of the #MeToo movement as their 2017 person of the year. As you are probably well aware, the #MeToo movement took over national consciousness when it went viral amidst dozens of women coming forward accusing media mogul Harvey Weinstein of sexual harassment and other violence. Since then, accusations against at least 74 public figures have come to light, leading to the firing of Weinstein and others, including House of Cards actor Kevin Spacey. Sexual Victimization by Women Is More Common Than Previously Known. Take a moment and picture an image of a rapist. 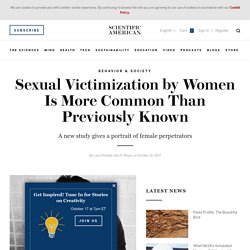 Without a doubt, you are thinking about a man. Given our pervasive cultural understanding that perpetrators of sexual violence are nearly always men, this makes sense. But this assumption belies the reality, revealed in our study of large-scale federal agency surveys, that women are also often perpetrators of sexual victimization. In 2014, we published a study on the sexual victimization of men, finding that men were much more likely to be victims of sexual abuse than was thought. Taylor Swift's 10 Most Powerful Statements From Her Sexual Assault Trial Cross-Examination. Thursday (August 10) marks day four of Taylor Swift's sexual assault trial against former KYGO radio host David Mueller—and it's arguably the most important one so far. 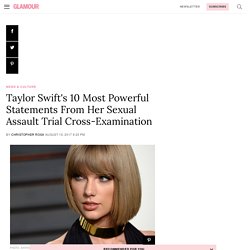 Why? Because Swift herself took the stand to testify against Mueller, and what she said is slowly making its way onto the Internet. If you're unfamiliar with the case, here's a brief overview: According to Swift, Mueller allegedly reached under her skirt and grabbed her ass when the two were taking a photo together during a meet-and-greet on her Red Tour in 2013. 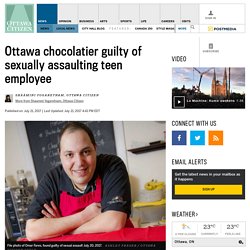 Omar Fares was found guilty Thursday in a judge-alone sexual assault trial. The allegations against the then-36-year-old owner and operator of A Thing for Chocolate on Wellington Street West were made by a high school employee who was 17 at the time. An Ontario court has just affirmed that cultural norms that excuse violence have no place here: Editorial. The woman, a recent immigrant from Iran, suffered brutal spousal abuse but didn’t even realize it was against the law. 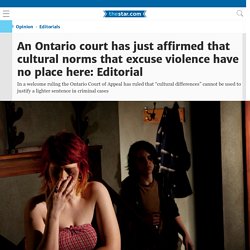 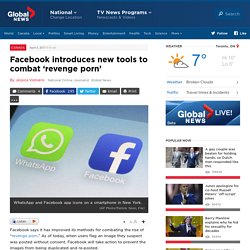 " This basically means that in order for feminism to be really, truly feminist, it has to include all women of all backgrounds, races, cultures, religions, classes, abilities, sexual orientation, and gender identities. White women often fail to make their feminism intersectional, creating what's known as "white feminism" — or the misguided system of belief that doesn't take multiple systems of oppression into consideration. 'Clearly a drunk can consent,' Halifax judge says in acquitting taxi driver charged with sexual assault. A Halifax taxi driver found with an intoxicated, unconscious, mostly naked woman in his cab and her DNA on his mouth has been acquitted of sexual assault by a judge who said there wasn’t enough evidence to prove the woman’s “lack of consent.” 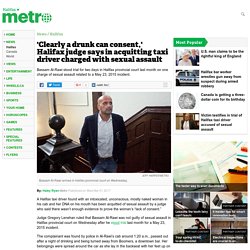 Judge Gregory Lenehan ruled that Bassam Al-Rawi was not guilty of sexual assault in Halifax provincial court on Wednesday after he stood trial last month for a May 23, 2015 incident. The complainant was found by police in Al-Rawi’s cab around 1:20 a.m., passed out after a night of drinking and being turned away from Boomers, a downtown bar. Her belongings were spread around the car as she lay in the backseat with her feet up on the two front seats, only a shirt partially covering her breasts. Men Pine for ‘the One That Got Away’ in Valentine’s Day Ad That Quickly Turns Dark – Adweek. It’s Valentine’s Day, and the men in this Canadian PSA campaign sound brokenhearted as they recall losing the women of their dreams. 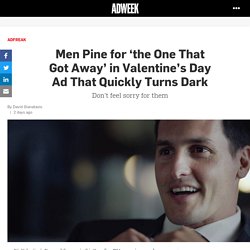 “I miss her smile. I miss her friendship,” says one. “When we broke up, my world got thrown,” says another. Unfounded: Police dismiss 1 in 5 sexual assault claims as baseless, Globe investigation reveals. T he keg party was a 10-minute walk from Ava’s new home at Delaware Hall residence, just north of Western University’s soaring stone gates. It was the Friday after Thanksgiving and, word had it, the organizers had already sold more than 200 tickets. She had been looking forward to it all week. Her first big bash as a university student. Ava left the dorm with her friends around 10:15 p.m., already feeling a bit tipsy from the drinks they had had while getting ready. How This Poster in a Women's Restroom at a Bar Cleverly Combats Sexual Assault. Of course Robin Camp was only the tip of the iceberg. A seasoned columnist once told me you know you’re losing your relevance when you start quoting yourself. But this is really too good to pass up. Two weeks ago, in the wake of Robin Camp — our poster boy for judges who don’t know the law, let alone exude gender sensitivity in applying it — I wondered who else?

Judge Gives York University Rapist Maximum Prison Time, Orders Him to Pay Mandi Gray’s Legal Fees. Mandi Gray's rapist Mustafa Ururyar has been sentenced to 18 months in jail. Canadian Press/Chris Young Mustafa Ururyar, the York University PhD student who raped fellow student Mandi Gray, has been sentenced to 18 months in prison—the maximum penalty possible. Judge Marvin Zuker handed down the sentence, which will be followed by three years of probation, in a Toronto courtroom Wednesday. Faiza Ahmed: how one woman’s cries for help were missed by every authority.

It was just after 8am on 6 November 2014 when Faiza Hassan Ahmed knocked on her neighbour’s door. Violet Nantayiro did not know her, but Faiza was obviously distressed. She let her in and tried to comfort her. Faiza said a man had attempted to rape her, and asked Nantayiro if she would ring the police on her behalf. Nantayiro did know that 31-year-old Faiza had been up much of the night.

She had heard people chatting and music playing until 3am in the flat upstairs. A few minutes later, police officers arrived at the address in Limehouse, east London. Mohammed Ahmed, 33, meets me at the offices of Women Against Rape, a campaign group that has supported Faiza’s family’s quest for justice. Mo was always close to his sister. First there was the age – Mo was just a year older than Faiza.

The media's responses to Jian Ghomeshi and John Furlong exposés are extraordinary. In October 2014, independent journalist Jesse Brown with the assistance of the Toronto Star published anonymous allegations that CBC star radio host Jian Ghomeshi had physically and sexually assaulted three women. Within a week, the number of anonymous women accusing Ghomeshi had grown to eight; by December, 15. Ghomeshi, of course, was disgraced, fired and now faces five criminal charges from the Toronto Police.

A Model Is Alerting Girlfriends Of The Men Who Send Her Dick Pics. How Brazilian Women Are Using Graffiti to End the Cycle of Domestic Violence by Lindsey Weedston. In March 2015, Brazil became the 16th Latin American country with a “Femicide Act.” The law mandates harsher punishment when women die as a result of domestic violence, gender discrimination, or “contempt for” women. It was a response to the reported 15 Brazilian women who die each day as a result of domestic violence.

9 Ways to Be Accountable When You've Been Abusive. As I sit in my bed and begin to type (beds are my favorite typing places), there is a part of me that says, Don’t write this article. There is a part of me that still resonates deeply with the fear and shame that surround the topics of abuse and intimate partner violence – the taboo that most communities have around talking not just about the fact that people experience rape and abuse, but that people we know and care about might be rapists and abusers. Perhaps most secret and shameful of all is the fear that we, ourselves, are or have been abusive – the fear that we could be those villains, those monsters in the night. 7 Ways Social Justice Language Can Become Abusive in Intimate Relationships.

What Bill Cosby Taught Me About Sexual Violence and Flying. When I was 17 years old, one day after the series finale of The Cosby Show, a 15-year-old black girl named Annie Glover* talked to me about sexual violence at Donnie G’s* party. I listened. Then she asked me to talk back. What’s really on trial in the Ghomeshi case. Jian Ghomeshi attends his pre-trial hearing at Old City Hall court in Toronto. The disgraced former CBC radio host plead not guilty to sex assault and choking charges.

5 Bizarre Realities of Being a Man Who Was Raped by a Woman. #2. Standing Up To Sexual Harassment And Assault In L.A.’s Comedy Scene. Think It's Creepy When Men Pursue Underage Girls? You'll Shudder When You Realize How Our Society Encourages It. 6 Things You Might Not Think Are Harassment, But Definitely Are. The Violent Exploitation Of Women In Fashion Continues. Chinese Woman Invents Hairy Leg Stockings - Hairy Leg Stockings Latest Self-Defense Tool. Why didn’t anyone help?

Why Harper Silenced Sisters in Spirit.

Rape culture. Street harassment. OWD : May: Sexual Assault Prevention Month. OWD : Recognizing Women. Victims’ pain: You can read it in their faces. It’s a girl, and her odds aren’t good.