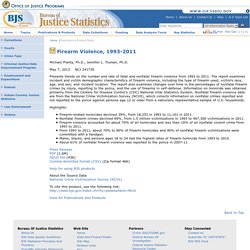 Truman, Ph.D. May 7, 2013 NCJ 241730 Presents trends on the number and rate of fatal and nonfatal firearm violence from 1993 to 2011. The report examines incident and victim demographic characteristics of firearm violence, including the type of firearm used; victim's race, age, and sex; and incident location. The report also examines changes over time in the percentages of nonfatal firearm crimes by injury, reporting to the police, and the use of firearms in self-defense. Highlights: Firearm-related homicides declined 39%, from 18,253 in 1993 to 11,101 in 2011. Press Release PDF (1.6M)ASCII file (43K)Comma-delimited format (CSV) (Zip format 46K) Help for using BJS products About the Source DataNational Crime Victimization Survey (NCVS) To cite this product, use the following link: View All Publications and Products.

Nvsr64_02. Bureau of Alcohol, Tobacco, Firearms and Explosives. The Bureau and Law Enforcement ATF recognizes the role that firearms play in violent crimes and pursues an integrated regulatory and enforcement strategy. 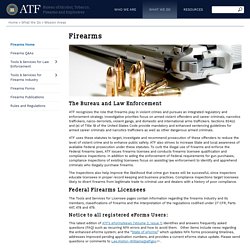 Investigative priorities focus on armed violent offenders and career criminals, narcotics traffickers, narco-terrorists, violent gangs, and domestic and international arms traffickers. Sections 924(c) and (e) of Title 18 of the United States Code provide mandatory and enhanced sentencing guidelines for armed career criminals and narcotics traffickers as well as other dangerous armed criminals. ATF uses these statutes to target, investigate and recommend prosecution of these offenders to reduce the level of violent crime and to enhance public safety. ATF also strives to increase State and local awareness of available Federal prosecution under these statutes. The inspections also help improve the likelihood that crime gun traces will be successful, since inspectors educate licensees in proper record keeping and business practices.

List of Awards. Emergency and Disaster Information Service. Teen murder suspect took 'turn for the worse' A 17-year-old Seattle high school student suspected in last week's shooting death of a Greenwood man will continue to be held in juvenile detention. 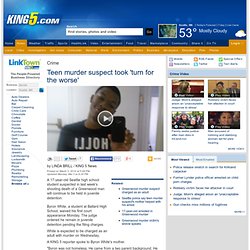 Byron White, a student at Ballard High School, waived his first court appearance Monday. The judge ordered he remain in juvenile detention pending the filing charges. White is expected to be charged as an adult with murder on Wednesday. A KING 5 reporter spoke to Byron White's mother. "Byron was not homeless. "During the last four to five months he took a turn for the worse. "A piece of my heart has been snatched out of my chest. " At Ballard High School Monday, officials announced the weekend arrest of one of their football players. "They pretty much said something happened with a student and you'd probably hear about it on the news," said one student. The school confirms that White is a Ballard senior. "People who hadn't heard about it were definitely shocked," said another student. "It's our responsibility to see this through. Maps. A Guide to Mass Shootings in America. Update, December 2: See our ongoing coverage of the mass shooting in San Bernardino here; we will update this database as more details emerge. 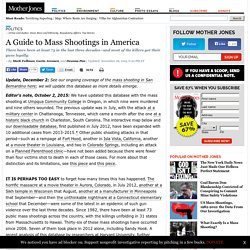 Editor's note, October 2, 2015: We have updated this database with the mass shooting at Umpqua Community College in Oregon, in which nine were murdered and nine others wounded. The previous update was in July, with the attack at a military center in Chattanooga, Tennessee, which came a month after the one at a historic black church in Charleston, South Carolina. The interactive map below and our downloadable database, first published in July 2012, have been expanded with 10 additional cases from 2013-2015.* Other public shooting attacks in that period—such as a rampage at Fort Hood, another in Isla Vista, California, another at a movie theater in Louisiana, and two in Colorado Springs, including an attack on a Planned Parenthood clinic—have not been added because there were fewer than four victims shot to death in each of those cases.

Nvsr64_02. Why the CDC still isn’t researching gun violence, despite the ban being lifted two years ago. President Obama and Vice President Biden unveiled a series of proposals to counter gun violence in January 2013. 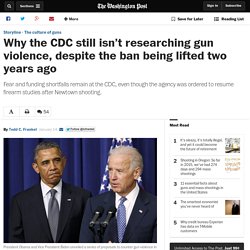 (Reuters/Kevin Lamarque) Two years ago this week, President Obama ordered the U.S. Centers for Disease Control and Prevention to get back to studying “the causes of gun violence.” The CDC had not touched firearm research since 1996 — when the NRA accused the agency of promoting gun control and Congress threatened to strip the agency’s funding. The CDC’s self-imposed ban dried up a powerful funding source and had a chilling effect felt far beyond the agency: Almost no one wanted to pay for gun violence studies, researchers say. The long stalemate continued until shortly after the December 2012 mass shooting at Sandy Hook Elementary in Newtown, Conn., when Obama announced several gun-control proposals, including reversing the CDC research ban. Congress has continued to block dedicated funding. So, the CDC is no closer to initiating gun-violence studies. Swanson remains hopeful.