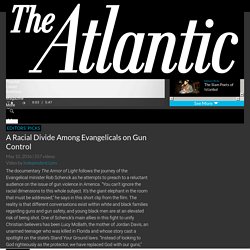 “You can’t ignore the racial dimensions to this whole subject. It’s the giant elephant in the room that must be addressed,” he says in this short clip from the film. The reality is that different conversations exist within white and black families regarding guns and gun safety, and young black men are at an elevated risk of being shot. One of Schenck’s main allies in this fight to unify Christian believers has been Lucy McBath, the mother of Jordan Davis, an unarmed teenager who was killed in Florida and whose story cast a spotlight on the state’s Stand Your Ground laws. “Instead of looking to God righteously as the protector, we have replaced God with our guns,” McBath tells Schenck. Line In The Sand. America's Deadly Gun Addiction, By the Numbers. 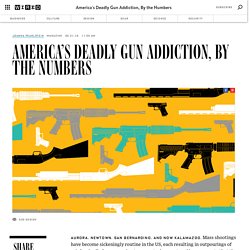 Newtown. San Bernardino. And now Kalamazoo. When Gun Violence Felt Like a Disease, a City in Delaware Turned to the C.D.C. The NRA Gave These Senators Millions To Block Gun Laws. The NRA and their bought-and-paid-for Senators have blood on their hands. 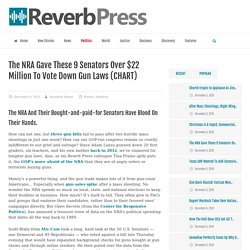 How can not one, but three gun bills fail to pass after two horrific mass shootings in just one week? How can our GOP-run congress remain so cruelly indifferent to our grief and outrage? Since Adam Lanza gunned down 20 first graders, six teachers, and his own mother back in 2012, we’ve clamored for tougher gun laws.

Alas, as my Reverb Press colleague Tina Praino aptly puts it, the GOP’s more afraid of the NRA than they are of angry voters or terrorists buying guns. Money’s a powerful thing, and the gun trade makes lots of it from gun-crazy Americans… Especially when gun sales spike after a mass shooting. ALL NRA RECIPIENTS - NRACONGRESS.COM. National Rifle Assn Outside Spending. Discloses Donors? 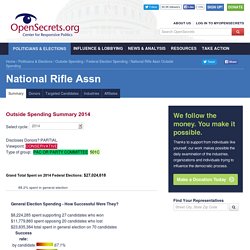 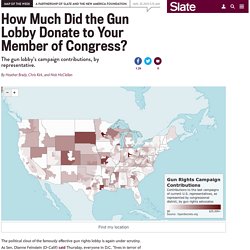 As Sen. Dianne Feinstein (D-Calif) said Thursday, everyone in D.C. “lives in terror of the gun lobby.” The gun organizations, through their PACs, employees, and other connected individuals, gave a record $3 million in campaign contributions in the last election cycle, according to OpenSecrets.org. Half of that sum went to House races, and almost all of it went to Republican candidates. So, which members of Congress did gun rights advocates help elect? National Rifle Assn: Summary. The National Rifle Association goes to great lengths (and spends a huge sum of money) to defend the right to bear arms. 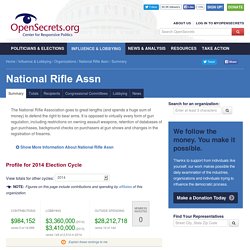 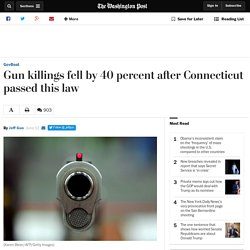 Bystanders, including a 7-year-old girl, were getting gunned down in drive-bys. “The state is becoming a shooting gallery, and the public wants action,” an editorial in the Hartford Courant said at the time. So in the summer of 1994, lawmakers hustled through a gun control bill in a special session. They hoped to curb shootings by requiring people to get a purchasing license before buying a handgun.

At the time, private citizens could freely buy and sell guns secondhand, even to those with criminal records. What liberals don’t want to admit about gun control. Play Video12:55 Obama speaks about Ore. community college shooting Speaking at the White House on Thursday evening, a visibly frustrated and emotional President Obama remarked on the deadly shooting at a community college in Oregon. 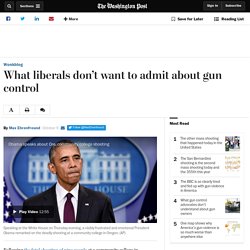 (AP) San Bernardino shooting: 11 essential facts about guns and mass shootings in America. Play Video1:11 What we know about the shooting in San Bernardino Police in San Bernardino, Calif., said heavily armed gunmen killed 14 people and injured 17 others during a holiday party for county employees. 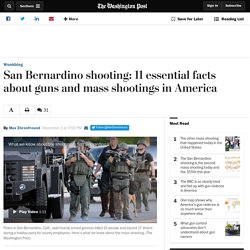 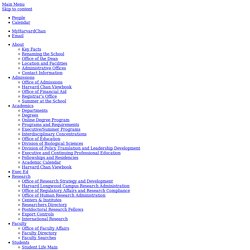 Where there are more guns there is more homicide (literature review). Our review of the academic literature found that a broad array of evidence indicates that gun availability is a risk factor for homicide, both in the United States and across high-income countries. San Bernardino shooting: 11 essential facts about guns and mass shootings in America. One map shows why America’s gun violence is so much worse than anywhere else. There are many ways in which America is exceptional. Unfortunately, one is the country's stunning rate of gun violence, which was demonstrated by two major mass shootings in the last week.

Whatever your opinion about gun rights, it's hard to deny that the frequency of mass shootings is closely tied with America's very high rate of gun ownership. The U.S. has an average of 88 guns per 100 people, according to a 2007 Small Arms Survey.